Susan Stamper Brown
|
Posted: Dec 27, 2016 12:01 AM
Share   Tweet
The opinions expressed by columnists are their own and do not necessarily represent the views of Townhall.com. 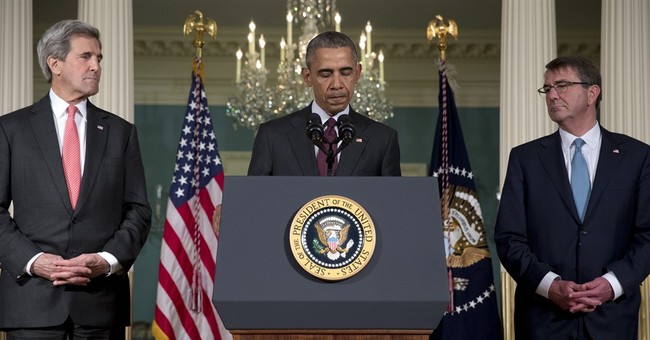 America's "Wreck it Ralph" is at it again. This time, President Obama decided to give Israel one last (we can only pray) kick in the behind before he leaves office. On December 23, the U.N. Security Council brought a resolution to a vote declaring that settlements Israel had built on and occupied since 1967 have "no legal validity."

When U.S. ambassador to the U.N. Samantha Power abstained rather than voting against the resolution, the Obama administration took the bizarre and unprecedented move to turn its back on Israel.The move serves to end Jewish settlement building and threatens to plow Israel back to its 1967 borders, potentially leaving them indefensible.

And the enemies of God's chosen people cheered.

Cheer all they want, but Israel will never be indefensible because Bible scripture clearly states that God is on its side.Zechariah 2:8 says those who touch Israel "touch the apple of his eye." And Isaiah 43: "...O Israel, fear not, for I have redeemed you; I have called you by name, you are mine. When you pass through the waters, I will be with you; and through the rivers, they shall not overwhelm you; when you walk through the fire you won't be burned...For I am the Lord your God, the Holy One of Israel, your Savior..."

Israeli Prime Minister Benjamin Netanyahu quickly responded to the U.N. action saying the resolution was nothing more than "old world bias against Israel." He said the resolution is out-of-whack because it stipulates the Western Wall and Jewish quarter are "occupied" territories.

Call it "occupied" or whatever they wish, but Israel is the land God promised through a covenant to Abraham with specificity in Genesis 15, confirming it to Abraham's son, Isaac, in Genesis 26, and again to Isaac's son, Jacob, in Genesis 28. Deuteronomy 1:8 reiterates that promise: "See, I have given you this land. Go in and take possession of the land the Lord swore he would give to your fathers ---- to Abraham, Isaac and Jacob ---- and to their descendants after them."

Scriptures aside, one would think that with so little time left until January 20, Wreck-it-Ralph Obama would concentrate on something productive like fixing his legacy problems rather than steamrolling over our longstanding and faithful ally in the Middle East. After all, coddling our enemies made Israel (and the world) less safe. Obama's legacy includes the bloodbath that is Syria, ISIS, and an empowered Iran with nuclear capabilities, to name a few.

With "friends" like that, Israel needs no new enemies.

Now that Obama's made peace difficult to achieve, our only hope is that Congress will counter the impact of this destructive resolution with the enactment of a statute stating this damnable resolution in no way represents US policy. Better yet, would be disassociating ourselves from the UN. But now I'm dreaming.

Speaker of the House Paul Ryan responded, promising the GOP will repair damages done by the human wrecking ball to all things good and right. "Today's vote," Ryan said, "is a blow to peace that sets a dangerous precedent for further diplomatic efforts to isolate and demonize Israel."

The United Nations is a despicable waste of U.S. taxpayer dollars, so maybe 2017 is the perfect time for the United States to divorce itself from the U.N. and then boot the U.N. out of the U.S. Trump should buy the U.N. building and turn it into a presidential library and museum with a special section allocated for Israeli memorabilia when he leaves office in 2025.

So, hang on Israel, there's hope. With January 20, 2017, just around the corner, please know that you have a friend in us, and an American president-elect who will stand with Israel and rebuild that which the Obama administration sought to demolish.