The Greatest Environmental Threat To The Planet? Liberals 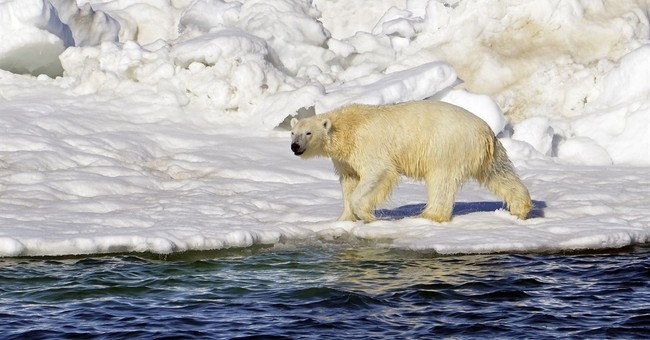 What a dilemma we humans find ourselves in when we discover that fixing one problem serves to worsen another, something a group of Environment Canada researchers recently determined finding environmentalists caused global warming in their attempts to curb it.

So what's next? Choosing between cleaner air for us and Arctic ice for polar bears?

The Environmental Protection Agency [EPA] repeatedly tells us burning fossil fuels like coal must be reduced and recent rules and regulations have drastically reduced those emissions. Additionally, back in 2013, the European Environment Agency reported a colossal 74 percent drop in emissions between 1990 and 2011. China joined the effort, reducing their emissions utilizing clean air programs.

All this effort might eventually kill us, given we also accept the global warming doom-and-gloom premise warning us that as sea ice melts, oceans will in turn rise, potentially turning carbon billionaire Al Gore's $8-plus million Montecito, Calif. beach villa into a modern-day Noah's Ark.

Okay. At least we'll have cleaner air to breathe before we drown. Or, maybe evolution will finally kick in and our feet and lungs will morph into fins and gills. If that happens, clean air won't matter anyhow.

Might it be more prudent confronting the real danger of our times, rather than waging war against an unidentified event which may or may not occur on an unspecified date in a future so far away that even our kids will not live long enough to experience or not experience it? If ISIS wins, our kids' future won't matter.

Meanwhile, once again seated somewhere in an alternate universe, President Obama suggested during a joint news conference with French President Francois Hollande, that attending the 21st yearly session of the United Nations Climate Change Conference in Paris will somehow be "a powerful rebuke to the terrorists [ISIS]." President Hollande traveled to Washington to discuss a bit more perilous issue, destroying ISIS.

But why deal with those who live to watch the world burn when you can secure "a better future for our children" as Obama said, yakking about climate change? Surely the enemy of our children's future shakes in their boots at the mere mention that our valiant leader courageously led the charge by attending a climate change conference.

During a debate Bernie Sanders said, "climate change is directly due to the growth of terrorism," warning, "limited amounts of water, limited amounts of land...to grow crops" due to global warming, may spark international conflicts. Bless his heart, someone needs to explain to dear old Bernie that the desert wasteland ISIS is headquartered in was there long before man-caused climate change.

And then there's Hillary. When asked during the CNN debate about who her enemies were, the former Secretary of State listed the NRA and Republicans, not ISIS. CNN reports Clinton also draws a connection between climate change and the Syrian refugee crisis, based on a far-fetched theory that drought in Syria initiated a huge migration of farming families to urban centers. (Insert: palm-banging-forehead emoji).

Let's backtrack (tongue-in-cheek, sort of): Liberals claim the refugee crisis and ISIS is caused by climate change. They also warn we're doomed because Arctic sea ice is melting. And it's melting faster because of cleaner air. We have cleaner air because liberals enforce unreasonable regulations. In essence and by their own admission, liberals are responsible for melting sea ice, polar bears' demise, global warming, the Syrian refugee crisis and ISIS.

Our only hope is for a few volcanoes to erupt or that someone black markets aerosol to the masses. The next president has his hands full.