Students For Liberty
|
Posted: Mar 13, 2017 8:21 AM
Share   Tweet
The opinions expressed by columnists are their own and do not necessarily represent the views of Townhall.com. 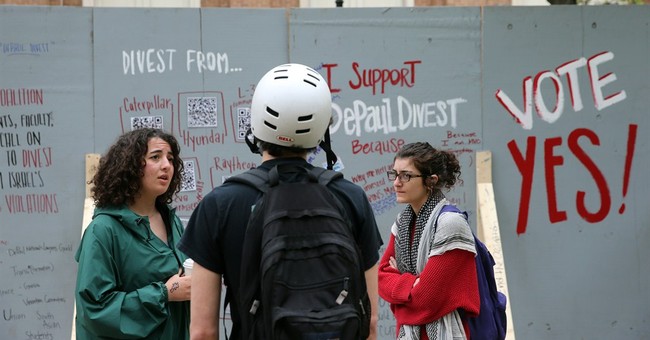 Editor's note: This column was authored by Jacob Linker.

I am a proud Jew and a proud American. However, I cannot defend the actions of my school — Fordham University — which has recently blocked the formation of a Students for Justice in Palestine (SJP) chapter on campus.

On November 17th, the United Student Government stated that SJP “fulfills a need for open discussion and demonstrates that Fordham is a place that exemplifies diversity of thought.”

However, Dean of Students Keith Eldredge would go on to deny SJP official recognition. He stated that Fordham “cannot support an organization whose sole purpose is advocating political goals of a specific group, and against a specific country”. Seemingly unaware of the irony, he went on to argue that “the Israeli-Palestinian conflict … often leads to polarization rather than dialogue.”

I am a proud defender of the state of Israel, the only nation in the region stretching from Morocco to Pakistan where citizens have a completely free press, unimpeded freedom of speech, and true civil liberties. I stand with Israel as it defends itself when Hamas attacks, regardless of the cries of an international community that routinely looks the other way as crises occur in Burma, Nigeria, Syria, and countless other hotspots. I defend the settlements in Jerusalem and the blocs which are generally understood to be a part of the State of Israel in any meaningful peace agreement.

I support the strong Israeli-American relationship with all of the economic, technological, security benefits it entails for both sides. When I see Palestine activists denounce Israel and look the other way towards Palestinian stubbornness and corruption, I am angered. I come from a household where when my parents found out about SJP being denied, I was asked by my father, who sounded incredibly proud, if I had anything to do with it.

But Fordham University has a real problem with political speech. In the name of avoiding controversy, they suck the air out of political life on campus and then act surprised that so few are able to take a deep breath. The fear of political polarization or controversy, which Dean Eldredge alluded to, often stifles meaningful dialogue on campus and deprives students of the opportunity to engage in the marketplace of ideas. I can think of one significant example in the recent past: Fordham pressuring its College Republicans Chapter to disinvite Ann Coulter.

The school is afraid of intense political dialogue today, but this was not always the case. In the late 1960s, Fordham was a center of campus political activism and the growing countercultural movement. Students for a Democratic Society's Fordham Chapter organized protests and boycotts, embracing the activist spirit of the times. The school indulged in a culture that demanded a more open curriculum and even set up a special college with no set requirements or grades that would become an institution (for lack of a better word) of national intrigue, reported on by publications such as Esquire, the Saturday Review, and Look.

Alas, activism and experimentation went too far on campus and the school clamped down. In 1970 the students stormed the main administration building, set fire to the faculty lounge, and occupied the building for several weeks. The University closed Bensalem College in 1974. Today the school requires two weeks' notice before any sort of activity, and all club excursions must be supervised by a professor. To even hand out fliers on campus is officially considered a protest that if not approved beforehand by the administration will result in security coming and shutting you down.

It is understandable that the school is afraid of the excesses of the 60s, but a free society cannot be shackled by fear. The school is concerned about political polarization and factionalism, but to quote James Madison in Federalist 10: “liberty is to faction what air is to a fire.” The only way to prevent division is to stifle liberty and freedom, and that's exactly what Fordham is doing when it bans groups like Students for Justice in Palestine. The State of Israel has members of the Knesset (the Israeli Legislature) such as Haneen Zoabi who denounce the right of the Jewish State to even exist, yet Fordham will not allow an open forum for defenders of Israel to face their accusers.

Fordham is both a Jesuit and a Liberal Arts institution, but it fails to fulfill its own purpose. The purpose of a liberal arts institution is to educate people, which is essential for a free person to be an active participant in civil society. Defending oneself, sharpening one's rhetoric, and interacting with one's fellow citizens were core aspects of the liberal arts process going back to ancient Greece, yet Fordham’s actions deny students the opportunity to develop any of these skills. A Jesuit education meanwhile is supposed to be more than simple book-based learning. A Jesuit education is supposed to be interactive and experiential.

Fordham University has one of the nation's best law schools. It possesses a student body that is well-represented in the business community, and has even produced a president. Yet it cowers from the prospect of becoming a hotbed of political activity once again. If Fordham wants to live up to the values it wants to instill in its student body, it must allow those students to breathe in the air of liberty, with all that that entails. The air of freedom can fuel the flames of controversy, but those flames are what bring light to the world. The school must be brave and allow dialogue to take place, and that means allowing SJP on campus.

Jacob Linker is a Campus Coordinator at Students For Liberty (SFL), the largest network of libertarian students in the world.