“I’m Not Supposed To Be Here” 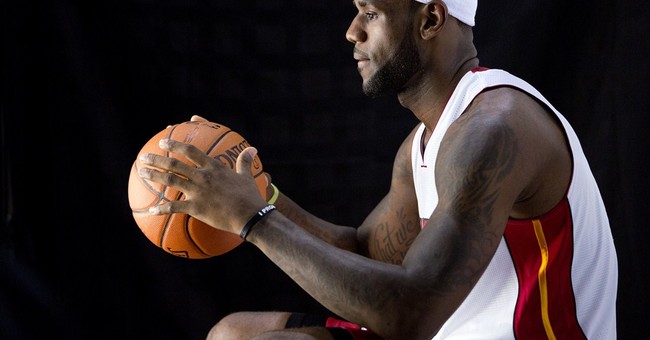 For three-year-old Deonta Howard of Chicago basketball has made an early impression on his young life. But unlike LeBron James, Michael Jordan, Kobe Bryant and Shaquille O’Neal, he was shot in the head at a basketball game by drive-by gangbangers Sept. 19.

He was with his mother at 10:15 p.m. when it happened at a park on the city’s Southwest Side. It’s in an area labeled a "high gang-conflict zone" by police. Miraculously, “Little Tay-man” is expected to recover. Gang violence is so widespread some are asking for the National Guard step in.

Who would think that life and death could revolve around a basketball? Yet ask many African American boys what they want to be in life and they’ll tell you an “NBA pro.” It’s their ticket out of hopelessness. The reality of course is that few are chosen, but who has the courage to look into their bright faces and tell them otherwise. For the cost of a basketball a kid can dream big.

Indeed, African Americans make up the majority of players in the NBA. Many African American players are successful far beyond the court, from financial to personal to professional. A little more than a month has passed since the 50th celebration of Martin Luther King’s famous “I Have a Dream” speech that he delivered at the Lincoln Memorial in 1963. A good many African Americans have moved into the realm of King’s dream that people “will be judged by the content of their character and not the color their skin.” So where does the nightmare of a three-year-old African American boy being shot in the head by drive-by shooters fit into King’s dream? Are there larger issues beyond color?

Perhaps comments made this summer by LeBron James after his team, the Miami Heat, won the NBA Finals against the San Antonio Spurs shed light on a bigger picture. I will never forget the words of the two-time NBA champion and a two-time Finals MVP as he held his trophies and responded to a comment about his rise to stardom in the midst of career controversies.

“"Listen, I can't worry about what everybody says about me," he said. "I'm LeBron James from Akron, Ohio, from the inner city. I'm not even supposed to be here. That's enough. Every night I walk into the locker room, I see a No. 6 with James on the back. I'm blessed."

His statement was so potent that it begs for deeper scrutiny far beyond the pale of a fleeting afterthought, uttered secondarily to the importance of the game. Perhaps it answers deeper questions about the roots of senseless gang violence and the epidemic number of murders plaguing our inner cities, representing indicators of a much larger societal problem.

Based upon my experience as a volunteer with the Christian Association of Youth Mentoring and working with hundreds of kids in the projects on the east side of the city where I live, I believe I know why LeBron made his comment, and why gang violence is out of control. Greater than the obvious fact, that he “grew up in the projects,” he was speaking from his heart—his real person. Because as most kids growing up in the projects, LeBron’s father was absent and he was told by others through words, attitudes, and lowered expectations that he would be a failure. That the world into which he was born was different, outside normal society, dependent on government subsidies, and so bleak that his destiny was already determined. A world characterized by a desperate, single mother trying to protect and raise her kids with the help of free rent (Section 8 Housing), food stamps, relatives, and work at minimum wages if she can find it. I thank God for these mothers who do their best, but they need help beyond government assistance.

Sadly there is overwhelming evidence borne out of a multitude of scholarly studies attesting to a limited and more troubled future ahead for children growing up in inner cities. The “projects” culture has largely removed the stigma of birthing “out of wedlock” children. I’ve seen it firsthand with the young boy and girl teens that I mentor when I ask them about their plans for marriage as they coddle their babies and reply with blank stares. Ironically, this is positive because NO child should be penalized because of the mistakes of his or her parents. Still, more children mean more welfare money. Sometimes, it’s as simple as that.

It can seem hopeless at times. Girls in the projects get pregnant in their early to mid-teens which perpetuates poverty, ignorance, failure and despair--teen mothers-grandmothers at age 28. There’s an enormous amount of temptation bombarding these kids who are trapped in ever-earlier maturing bodies.

Who’s to blame? The President? Congress? Civil Rights leaders who seldom speak out on this issue? All of them? Well, the answer is “yes” and “no.”

According to the U.S. Census Bureau, 24 million children in America, or one out of three, live in biological father-absent homes. Children in father-absent homes are almost four times more likely to be poor. Further, in 2012, 12 percent of children in married-couple families were living in poverty, compared to 44 percent of children in mother-only families. Even after controlling for income, youths in father-absent households still had significantly higher odds of incarceration than those in mother-father families. Youths who never had a father in the household experienced the highest odds. A 2002 Department of Justice survey of 7,000 inmates revealed that 39% of jail inmates lived in mother-only households. Approximately forty-six percent of jail inmates in 2002 had a previously incarcerated family member. One-fifth experienced a father in prison or jail.

Being raised by a single mother raises the risk of teen pregnancy, marrying with less than a high school degree, and forming a marriage where both partners have less than a high school degree. Separation or frequent changes increase a woman’s risk of early menarche, sexual activity and pregnancy. Women whose parents separated between birth and six-years-old experienced twice the risk of early menstruation, more than four times the risk of early sexual intercourse, and two and a half times higher risk of early pregnancy when compared to women in intact families. The longer a woman lived with both parents, the lower her risk of early reproductive development. Women who experienced three or more changes in her family environment exhibited similar risks but were five times more likely to have an early pregnancy.

A study using data from the Fragile Families and Child Wellbeing Study revealed that in many cases the absence of a biological father contributes to increased risk of child maltreatment. The results suggest that Child Protective Services (CPS) agencies have some justification in viewing the presence of a social father as increasing children’s risk of abuse and neglect. It is believed that in families with a non-biological (social) father figure, there is a higher risk of abuse and neglect to children, despite the social father living in the household or only dating the mother.

Even after controlling for community context, there is significantly more drug use among children who do not live with their mother and father. In a study of 6,500 children from the ADDHEALTH database, father closeness was negatively correlated with the number of a child’s friends who smoke, drink, and smoke marijuana. Closeness was also correlated with a child’s use of alcohol, cigarettes, and hard drugs and was connected to family structure. Intact families ranked higher on father closeness than single-parent families.

Father involvement in schools is associated with the higher likelihood of a student getting mostly A's. This was true for fathers in biological parent families, for stepfathers, and for fathers heading single-parent families. But when you have so many fathers absent from the home, young men have no one to discipline or to mentor them. It’s been said that “it takes a village to raise a child,” but as I’ve seen, an unhealthy village can destroy a child. Still, if we work together we can help many kids live up to their potential.

The biggest issue is: “What is my responsibility and what can I do?” When I faced up to this nagging question, it totally changed my perspective…like, “Why curse the darkness when you can light a candle?”