Struan Stevenson
|
Posted: Apr 30, 2022 12:01 AM
Share   Tweet
The opinions expressed by columnists are their own and do not necessarily represent the views of Townhall.com. 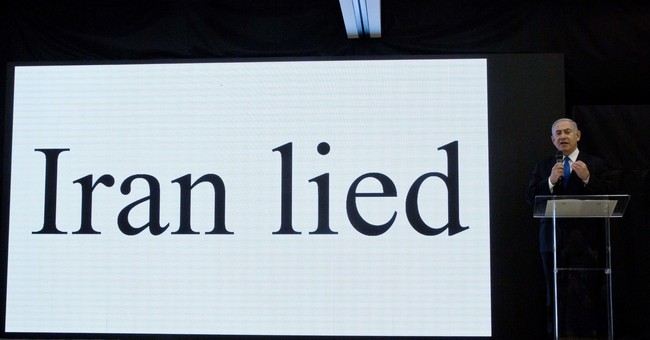 In an astonishing interview last week on the Iran Students Correspondents Association (ISCA) news channel, an Iranian state television outlet, the former deputy speaker of the Iranian parliament, Ali Motahari, spilled the beans on the theocratic regime’s nuclear ambitions. “There is no need to beat around the bush,” he said. “When we began our nuclear activity, our goal was indeed to build a bomb.” The politician and son of an Ayatollah admitted that the goal of constructing a nuclear bomb was to use it as a “means of intimidation and to strike fear in the hearts of the enemies of Allah.” Motahari continued by stating that the plan by the regime had been to keep the nuclear program secret until such time as they were ready to perform a nuclear test. “It would then have been a done deal, like in Pakistan,” he said, arguing that the world tends to take seriously countries that have nuclear bombs like Pakistan and North Korea. They are “taken into consideration on the global stage,” he said.

During the interview, Motahari said, “From the very beginning, when we entered [into] nuclear activity, our goal was to build a bomb and strengthen the deterrent forces. But we could not maintain the secrecy of this issue and the secret reports were revealed by the group of hypocrites." The pejorative term ‘hypocrites’ is used by the clerical regime when referring to the People’s Mojahedin of Iran/Mojahedin-e Khalq (PMOI/MEK) – the main democratic opposition group. The PMOI/MEK famously shocked the world when they revealed the Iranian regime’s secret nuclear program at a special press conference in Washington, D.C., back in 2003. Western intelligence agencies had failed to detect the clandestine activity. The Iranian resistance's exposure of the regime’s Lavizan-Shian top-secret nuclear site in northeastern Tehran triggered the intervention of the International Atomic Energy Agency (IAEA) and forced the regime to hide its nuclear activities underground.

Since that time, the mullahs have strenuously denied they were attempting to build a nuclear bomb, while accelerating their construction of thousands of centrifuges used for the enriching of uranium to weapons’ grade capacity, now believed to be around 60 percent purity – only a fraction short of weapons’ grade. Despite this, the regime has continued to insist that their nuclear ambitions are entirely peaceful and only for passive energy generation. Motahari told the ISCA news channel that States wishing to use nuclear technology for peaceful purposes don't begin with enriching nuclear materials. "But the fact that we enrich directly creates the illusion that we want to make a bomb," he added.

President Obama negotiated the controversial Joint Comprehensive Plan of Action (JCPOA) nuclear deal with Iran in 2015, in a desperate attempt to create some sort of international legacy from his otherwise uninspiring two terms in office. The 10-year deal prohibited IAEA inspectors from entering any of the regime’s military sites, where, of course, all covert nuclear activity is underway. President Trump unilaterally withdrew America from the JCPOA in 2018, calling it the worst deal in US history and imposing a tough raft of sanctions in his “maximum pressure” campaign against the mullahs’ regime. President Biden is now keen to reinstate the tattered pact, although it has only three more years to go and talks have been going on in Vienna for more than a year in a bid to resurrect the agreement.

The Vienna talks have stalled while the mullahs demand the lifting of sanctions and the removal of the Islamic Revolutionary Guards Corps (IRGC) – the equivalent of the regime’s Gestapo – from international terrorist blacklists. The IRGC and its extra-territorial Quds Force control around 70 percent of the Iranian economy and finance and maintain proxy wars in Syria, Yemen, Iraq, Lebanon, and Gaza, exporting conflict and terror across the Middle East and the wider world. There is growing opposition to any notion of de-listing the IRGC and removing sanctions, which would revitalize the Iranian economy, embolden the mullahs and encourage the regime’s policy of aggressive meddling and expansionism and export of terror. But appeasers, led by the EU’s top diplomat Josep Borrell, have sought to placate the fundamentalist regime for decades and are desperately seeking any excuse to reconstitute the deeply flawed JCPOA. The startling TV admission by Motahari will have done little to curb their enthusiasm.

Although Motahari ended his interview by carefully pointing out that Iran’s Supreme Leader – Ayatollah Ali Khamenei – is against the bomb and “believes that building nuclear weapons is completely impermissible," his contentious comments were quickly taken down from the ISCA site and replaced with a statement by him that claimed he had been “incorrectly understood.” He will almost certainly now face severe reprisals from the mullahs and the IRGC for exposing their lies and duplicity. Reeling from a broken economy, raging poverty, a catastrophic pandemic and international disapproval for their support of Putin’s invasion of Ukraine, the mullahs are punch drunk, wondering where the next blow will come from. President Biden should do nothing to lighten their burdens. The west must now throw their support behind the 80 million Iranians and their courageous PMOI/MEK resistance units, who are sick to death of this venally corrupt and oppressive regime.

By Struan Stevenson - Coordinator of the Campaign for Iran Change (CiC). He was a member of the European Parliament representing Scotland (1999-2014), president of the Parliament's Delegation for Relations with Iraq (2009-14) and chairman of the Friends of a Free Iran Intergroup (2004-14). Struan is also Chair of the ‘In Search of Justice’ (ISJ) committee on the protection of political freedoms in Iran. He is an international lecturer on the Middle East and is also president of the European Iraqi Freedom Association (EIFA).