President Donald J. Trump Forwarded the Cause of MAGA

Steve Sherman
|
Posted: Jan 20, 2021 12:01 AM
Share   Tweet
The opinions expressed by columnists are their own and do not necessarily represent the views of Townhall.com. 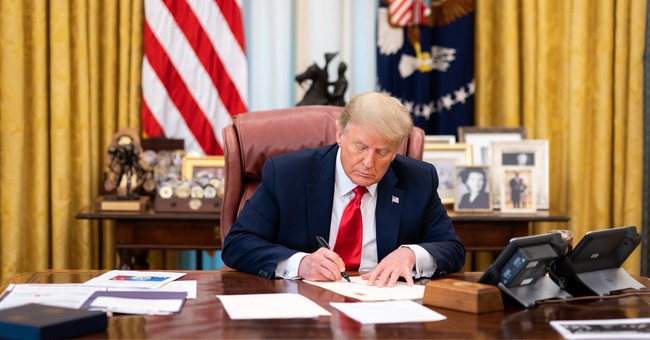 The media can smell blood in the water around President Trump. Finally, they feel like they can vanquish their most hated foe even if it is virtually his last day in office. With a second impeachment of President Donald J. Trump, the media refuses to give him any credit for Making America Great Again. President Trump accomplished so many things during his term as president, yet nobody in the media wants to give him any credit for a pre-coronavirus booming economy and numerous renegotiated trade deals. On foreign policy, President Trump balanced tough policies towards terrorism and a backing away from nation building policies that left American resources overstretched.

Trump’s foreign policy doctrine had the goals of defeating terrorism, holding leaders accountable for bad actions and securing peace in some regions. The aggressive efforts to hold bad actors accountable included devastating ISIS in Iraq and Syria and neutralizing the world’s top terrorist – Qasem Soleimani. Trump abided by the "Peace through Strength" mantra of President Ronald Reagan by his rebuilding of the military with increases in defense spending and creation of the U.S. Space Force. He updated the nuclear forces while strengthening missile defense as a deterrence to foreign bad actors. For all the politicians who accused him of being an isolationist, they ignore the government actions that made America stronger in an effort to deter America’s enemies from contemplating attacking the homeland.

President Trump can take credit for some accomplishments that evaded his predecessors. His administration negotiated a series of historic peace agreements between Israel and the UAE, Bahrain and Sudan. I never thought I would see peace deals in the Middle East like that in my lifetime. It is truly monumental.

He attempted to broker a lasting peace with North Korea and engaged in historic talks to lower the temperature between traditional adversaries including Russia. President Trump lowered troop levels in Afghanistan and did not start any new wars. No president in a generation can make that claim, which is not lost on me as a father with a son in the military.

The president’s "America First" foreign policy was a good one and is in stark contrast to the Obama Administration’s interventionism in Libya and Syria that lead to more instability in the region. It is hard to look at the foreign policy of President Trump as being anything other than a success.

The president attempted to drain the swamp of government contracting that has wasted taxpayer cash in favor of a consultant class in Washington, D.C. He entered office criticizing the F-35 Joint Strike Fighter Program for the cost being “out of control” and ends his term with his Acting Secretary of Defense, Christopher Miller, calling it a flawed acquisition program. Miller was asked about his regrets during his tenure at the Pentagon and he cited a “wicked problem” of the “monster” contract that locks the Pentagon into paying hundreds of billions for the next generation aircraft. He was worried that the Pentagon was stuck in a Cold War mentality as applied to massive contracting for fighter jets and battle ships. President Trump did much to fight the swamp and we can expect things to get worse when the establishment Biden administration retreads get back in power at the Pentagon to continue the pro-Swamp policies that pervaded the Obama years.

Trump’s economic doctrine included tax cuts, regulatory reform and new trade deals that helped expand the economy. Before the coronavirus pandemic, unemployment numbers were at historic lows, the stock market was soaring and income for Americans was steadily rising to record highs. The president lead the fastest recovery in American history with 11.4 million jobs added between May and late October of last year. Trump promoted a pro-growth, pro-worker agenda that included middle class tax relief and regulatory changes that freed up businesses from red tape regulations that slowed growth.

President Trump’s economic policies were popular, and the job numbers were good news before the coronavirus pandemic hit. The president could take credit for the lowest unemployment numbers for the past half century. Those numbers included the lowest level of joblessness for African-Americans, Asian-Americans, women and massive job creation in the manufacturing sector. Part of that push was his harsh stand against China’s abusive trade policies and his renegotiation of the North American Free Trade Agreement (NAFTA) that outsourced American jobs to Mexico and Canada. Also, his pro-energy policies lead to energy independence for Americans and jobs in that sector expanding. President Biden is expected to use the pre-text of the Green New Deal to attack American energy jobs.

When the economy was in trouble, the president helped lead to get aid to struggling small businesses and families through the CARES Act and the PPP program. The American economy faced one of the biggest challenges in human history when the coronavirus pandemic caused many governors to shut states down, yet the bounce back continues today because of a pro-private sector leader. Where are the talking heads on cable news to say these things and to point out the accomplishments? They don’t exist, because the media is so focused on news that favors palace intrigue and the impeachment fight intended for Democrats to get revenge on President Trump.

President Trump does not get enough credit for Making America Great Again (MAGA), yet conservatives understand that, on balance, Trump’s record was a good one. For all his faults, judge Trump on his record and history may be much kinder than Democrats would like to President Donald J. Trump.