Will Compassion and Federalism Win in Medical Marijuana Debate?

Steve Sherman
|
Posted: Jan 25, 2018 12:01 AM
Share   Tweet
The opinions expressed by columnists are their own and do not necessarily represent the views of Townhall.com. 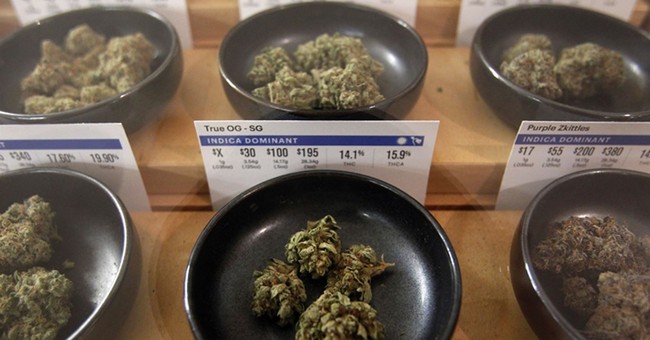 The hippies of the 70s are old. Time is merciless and none of us get out of here alive. My dad is a baby boomer born in 1944. He enjoyed his time as a 20 and 30 something in the '60s and '70s of America. It was a crazy time marked by free-love, tie-dyed shirts, pot-smoking, a free-wheeling youth, and the chaos of Vietnam.

That was a long time ago. Until a year ago, my dad, now in his early 70s, was diagnosed with Parkinson’s Disease. My dad was a strong man who worked construction much of his life. His parents had lived into their 90s, so we all assumed he had a good 20-year run remaining. We’d all noticed a little shake in his hand at Christmas and by spring it was confirmed to be a ruthless and debilitating neurological disease that has no cure.

It’s a terrifying moment when you have to resign yourself to a fate that only a miracle from heaven can cure. The conversation immediately turns to symptom management. That’s all there is. The only hope is to fight the symptoms off long enough to live another five or 10 years or maybe more if you’re lucky.

So, when the moniker of the 70s, marijuana, is found to be in many cases a miracle drug in controlling those symptoms…it can turn the most die-hard anti-drug hardliner into a libertarian.

If marijuana oil, or pot gummy bears, or an inhaler, or whatever form we choose allows my dad to be a grandfather to my kids a few years longer, then I am for it. It’s time for Congress to get on the right side of federalism and let the states decide this issue. Let the drugs get to the people who need it.

I would not wish my dad’s illness on anybody, but I wonder if Attorney General Sessions would change is bulldog stance on medical marijuana if the next time he put his pen to paper he noticed a slight tremor in his hand. Nobody should take one of the most promising medications away from those who suffer.

Conservatives in Congress have long supported the idea of federalism and the right of states to govern themselves. Right now, Congress is debating the future of the 29 states and the District of Columbia that have passed laws allowing medical marijuana’s use and distribution within the states’ borders. There are a number of conservatives who are fighting to protect federalism from Attorney General Jeff Sessions’ stated intention to free up the Justice Department to prosecute medical marijuana states.

The time is now. Congress is working on finishing up appropriations bills for this year. They’re arguing over a funding rider that prevents the DOJ from prosecuting states that allow medical marijuana. Attorney General Sessions is an aggressive voice to remove that provision from law.

Why? He hates drugs of any kind more than he believes in the states rights to govern themselves. A government closer to the people being governed is always a better government.

Medical Marijuana won’t rise to the level of DACA, but if this provision is removed from the appropriations bill, more Republicans will oppose it on February 8th when Congress takes up appropriations again.

When President Donald J. Trump was running for office, he unequivocally told a Colorado reporter, Brandon Rittman, when asked if he would allow his Attorney General to shut down adult use of marijuana in Colorado he answered, “I think it should be up to the states, absolutely.”

It’s time to hold President Trump to that promise.

Trump professed many times his support for medical marijuana and made numerous statements in support of federalism in regards to state medical marijuana laws. Literally issues like this caused many to boldly vote Trump. Constitutional conservatives supported Trump because they believed he would protect federalism and states’ rights to make laws with regard to activities that are conducted within their boundaries.

The DOJ is on the attack and medical marijuana is in their sites. Earlier this month, the Justice Department withdrew the Cole Memo that provided a safe harbor for marijuana operators in states allowing its sale and following eight law enforcement guidelines. Senator Cory Gardner (R-CO) Tweeted that Sessions's withdrawal of the Cole Memo contradicted, “what Attorney General Sessions told me prior to his confirmation.”  Conservative Rep. Dana Rohrabacher (R-CA) was the chief sponsor of an amendment in 2014 that defunded the federal government’s power to prosecute the use, distribution, possession or cultivation of medical marijuana and Congress voted to support his position 219-189 on May 30, 2014. His efforts were joined in the Senate by Sen. Rand Paul (R-KY).

This is an issue that has been championed by conservatives who respect federalism from day one. This isn’t about a bunch of people sitting around in VW Vans smoking doobies. This is about my dad being able to walk into my son’s band concert and not need a wheel chair.

Does the DOJ, Trump, and the GOP for that matter, really want to be against that?