Steve Milloy
|
Posted: Nov 21, 2019 12:01 AM
Share   Tweet
The opinions expressed by columnists are their own and do not necessarily represent the views of Townhall.com. 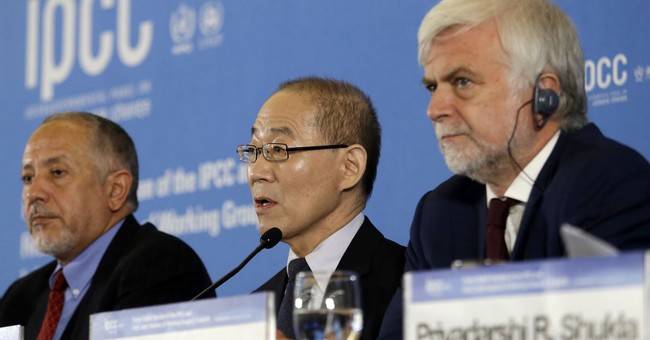 Ten years ago this month, global warming was hacked. More than one thousand emails were stolen from a server at the University of East Anglia’s Climate Research Unit and stored on a Russian server for all the world to tip-toe through. The hack not only permanently changed the climate debate, but has led to a still-to-be-determined free speech question that could very well go to the Supreme Court.

Quickly labeled “Climategate,” the email controversy began with a 1998 study published in the journal Nature purporting to have recreated average global temperature for the past 1,000 years from tree rings from a handful of sites around the world. The graph of those temperatures showed a slight downward trend until the 20th century when it spiked upward. The graph became popularly known as the “hockey stick.” The UN’s International Panel on Climate Change (IPCC) subsequently made the hockey stick an icon of global warming by featuring it in its 2001 report on climate.

But there were questions. Aside from the dubious proposition of being able to discern 1,000 years of average temperatures for 198 million square miles of the Earth’s surface from just a handful of trees, the hockey stick had eliminated the well-known Little Ice Age from existence and had curiously cut-off off some inconvenient tree ring data.

Requests for the data and models used by the paper’s authors by skeptics were rebuffed. A Freedom of Information Act request to the University of East Anglia was stalled. Apparently unhappy by the stonewalling of the FOIA request, the still-unknown hacker struck in what was perhaps the first case of major email theft for political purposes.

The contents of the emails were explosive. Coming amid heated congressional debate over the House-passed Waxman-Markey cap-and trade bill and just days ahead of the UN’s December 2009 Copenhagen climate conference, the emails stole the spotlight and upended the climate debate.

The emails reveal that the hockey stick creators had, in fact, knowingly deleted tree-ring data that showed a decline in temperatures famously quoted as “Mike’s Nature trick… to hide the decline”. One prominent climate scientist bemoaned that no one really understood the Earth’s energy system. Most damning, though, were the emails showing that climate scientists were actively pressuring journal editors to not publish studies and criticisms from skeptics and deleting emails to cover their tracks.

After recovering from the initial shock, the climate establishment regrouped and tried to turn Climategate into a nothing-burger. Numerous organizations conducted “investigations” bemoaning the theft of the emails and absolving the climate scientists from any wrongdoing.

The problem, however, is that not one of these institutions conducted an investigation into the substance of the emails. Only one investigation interviewed a single climate skeptic, MIT’s Dr. Richard Lindzen, and then ignored his testimony.

Though the institutional investigations were all whitewashes, the climate movement was permanently damaged. The rest of the interested world could read the candidly written emails which had validated many of the criticisms climate skeptics had been making.

In October 2012, lead author of the 1998 hockey stick paper, Michael E. Mann, sued the National Review and Competitive Enterprise Institute for libel in the Superior Court of the District of Columbia. Writers for the groups had described Mann’s hockey stick work as “fraudulent” and compared his “molestation” of data to Penn State child molester Jerry Sandusky. There is no question that was tough language, but given the nature of the often vicious climate debate, was it defamatory?

Shockingly, the cases are still ongoing. The good news is that, although news outlets like the Washington Post and Associated Press tend to bat for climate alarmism in their reporting, in the case of Michael Mann vs. Free Speech, they and 15 other news outlets have come to the side of free speech.

In a brief for the defendants, the news outlets stated,  “The challenged statements were made in settings and using language that conveyed they were opinions. Against that backdrop, the challenged statements – that Mann manipulated data to serve a political agenda and that governmental bodies improperly endorsed his views – are, as numerous other courts have recognized, protected opinions about both scientific research and public policy based on it.”

There’s a lot at stake for everyone. If this Jarndyce vs. Jarndyce litigation marathon ever makes it out of the Washington, DC court system, the US Supreme Court will likely have the last word.

Steve Milloy publishes JunkScience.com, served on the Trump EPA transition team and is the author of “Scare Pollution: Why and How to Fix the EPA” (Bench Press, 2016).