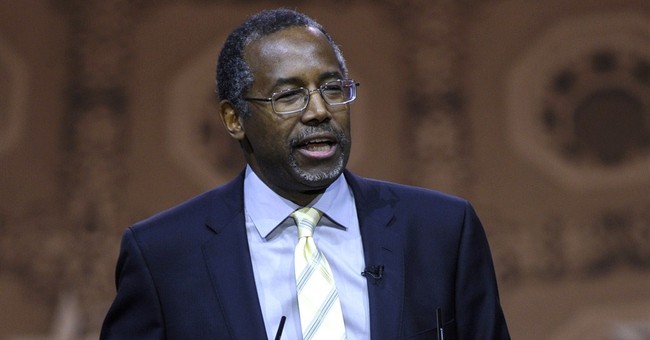 This column is not meant to endorse Dr. Ben Carson for president, because in my opinion it's too early to endorse him or anybody else at this point.

The vetting process is in its nascent stages, and you don't really know anything about the candidates as potential standard-bearers until you get them out there on a national stage together, and then you can size them up accordingly.

This column isn't even about Carson's looming presidential run. Rather, it's about our response to it as conservatives. Some of which is troubling.

I recently spent a good portion of a Saturday with Dr. Carson. We ate two meals together. One of those was a private lunch, which provided the occasion for a blunt, off-the-record discussion about where the country is at as well as his potential candidacy. I also emceed a fundraiser he spoke at that was packed with key Iowa Caucus activists. So I think I got a fairly good glimpse of Carson's motivations and beliefs.

Carson didn't have any handlers. He came only with his friendly wife Candy, who was very comfortable introducing herself to everyone, and took some time to go and play the violin at a local hospital for some sick kids. If he's a stalking horse for the establishment, which is a theory I've heard posited from some conservatives, Carson did a very poor job of playing his role. He did and said almost all the things the political class says not to do and say, and the crowd ate it up.

Is Carson as winsome a communicator as Mike Huckabee? No.

Is Carson as powerful defending conservative principles as Ted Cruz? No.

Does Carson have a track record like a Rick Santorum or a Bobby Jindal? No.

Is Carson surrounded by people who have been preparing to run him for president from the time he first became known like Rand Paul? No.

But what Carson has going for him is a life story that is the very embodiment of the American Dream. As well as a deep desire to end the Left's politically-correct divisiveness, and restore the melting pot of a uniquely American culture that was once our biggest strength as a people.

And that puts Carson in line with how most Americans feel at the moment. They don't like Democrats, and they don't trust Republicans. They don't want the Democrats taking the country any further left, and they don't believe the Republicans will do anything about it. In short, most Americans feel as if they're not represented by either party, and they're tired of being called names just because they disagree with something that's hurting them and their children.

Carson fills that longing Obama first tapped into in 2008 before his Marxism started shining through once he was in office. But while Obama fashioned himself a golden calf for the masses seeking a political savior, Carson earnestly believes that returning to the ideals that turned a black kid who grew up in deep poverty into one of the world's foremost neurosurgeons is our deliverance. Carson wants to use the platform of a campaign not to pander, but to take that message to places most conservatives have either written off or are afraid to enter. His life story of overcoming the odds makes him believe that actually might work.

That doesn't mean Carson should be the GOP nominee in 2016, or that he shouldn't be vetted. In fact, before he spoke at the fundraiser I emceed I encouraged the crowd to look past his exemplary life story and still vet him as they would any other candidate.

But it does mean someone who really wants to be your ally shouldn't be made to be an enemy. While most conservatives are welcoming Carson into the field with open arms, some patriots I really respect immediately jump to his past questionable comments on the Second Amendment. Or his support for Monica Wehby not running as a pro-life candidate in liberal Oregon, even though Carson believes abortion is "murder."

Those things are fair game for thinking he's not ready for primetime, but in case you haven't noticed recently we are lacking for Jonahs willing to go to Nineveh. Heck, we can't even get most Republicans to stand boldly in a room full of conservatives, let alone against the tide of political correctness as Carson is willing to do. Therefore, even if Carson isn't presidential material for you, at the very least he could be a powerful friend in a war for the soul of America that requires all hands on deck.

The harvest is plenty, but the workers are few. Carson has shown up to work while many who claim to be on our side are out to lunch. I say we hand him a hard hat.