How to Properly Play the Race Card 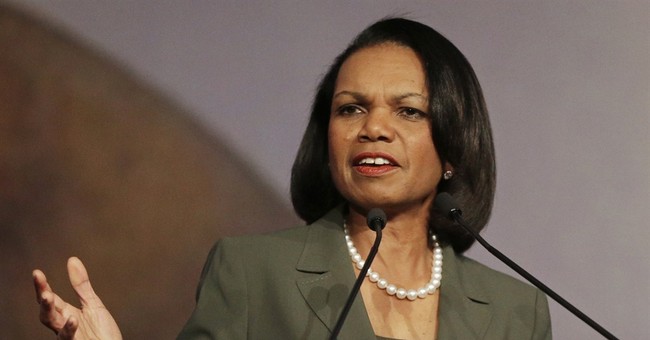 My book Rules for Patriots: How Conservatives Can Win Again is full of examples of wimpy Republicans blowing it for the rest of us, which surprises exactly no conservative reading this. Recently on my radio show, Ken Cuccinelli of the Senate Conservatives Fund compared Republican leadership to an ad on EBay for a French Army rifle: “never used, dropped once.”

Other than so-called social issues, nowhere is the GOP’s “surrender now before it’s too late” mantra more prevalent than on the subject of race. Republicans are so afraid of being called racists by the lamestream media, they’ve essentially allowed the Marxist Progressive in the White House to ransack our constitutional republic.

But after some recent comments by Secretary of State Condoleezza Rice, I’m hoping that’s beginning to change.

Responding to a question about racism in America, Rice, who knows a thing or two about breaking down racial barriers, had this to say:

Of course, Rice is exactly correct.

Look at Detroit, where over 90 percent of the students enrolled in the public schools there are black. However, only 7 percent of the city’s 8th graders are reading proficient. That’s right—only 7 percent. That is a community-wide tragedy that will reap a bitter harvest generationally (and already has), once these children grow up in poverty, and then lack the means by which to overcome their environment. From there they will sadly pass it on to their children, thus creating tragic cycles of dysfunction.

In one quote, Rice upheld several of the 10 Commandments of Political Warfare found in my book:

Whether intentional or not, Rice has established a template Republicans should follow in the future when confronted with race-baiting. Everywhere these race-baiters’ favorite politicians reign minorities are worse off. America needs to be told that tale, but it takes people with courage of conviction to tell it.