Rand Paul Makes His First Major Play for the Presidency 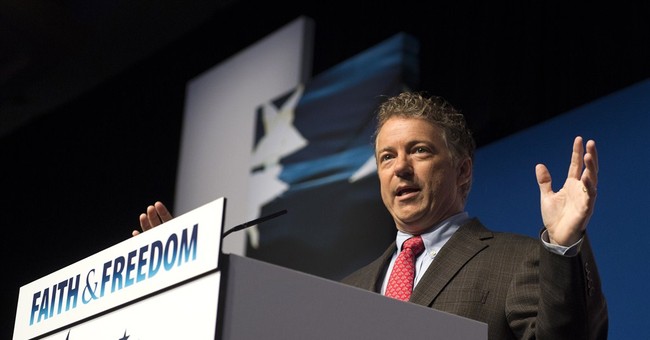 The first-in-the-nation Iowa Caucuses are still at least 16 months away, but an invite-only meeting held at a Des Moines hotel on Wednesday is the sort of an event that could determine Kentucky Senator Rand Paul’s presidential aspirations.

In recognition of the fact those with a Biblical worldview are traditionally the largest voting bloc in the Iowa Caucuses, Paul’s 2016 presidential campaign invited about 20 key Iowa pastors for a sit-down lunch with no question off-limits. Each pastor was also given an 18-minute DVD that included information about Paul’s Christian testimony and his stance on Israel. Paul has been in the news recently for publicly denying that he once wanted to cut off U.S. aid to Israel, despite the fact in 2011 he was a vocal proponent of it.

One of the pastors in attendance, Mike Demastus of Ft. Des Moines Church of Christ, is the kind of activist you have to win over if you’re going to win the Iowa Caucuses.

“It wasn’t off-the-record and (the campaign) specifically said they wanted pastors there who were not pro-Rand,” said Demastus, who caucused for Rick Santorum in 2012 and Mike Huckabee in 2008. “I probably knew at least half of those guys, because we’re all pretty active politically.”

By doing this, Rand Paul was taking a necessary step in Iowa his father was hesitant to take. I was in a private roundtable with Ron Paul and a group of social conservative activists during the last caucus cycle, and to say it was a bit of an awkward exchange would be like saying Lady Gaga is a bit flamboyant. But as part of his ongoing mission to show he’s not just like his dad, while still trying to maintain prominence with his father’s libertarian base, Rand went on the charm offensive.

“(Rand) was very cordial and took the time to meet with each of us individually,” Demastus said. “That was brave and I give him a lot of credit for that. It was nice to see him being open and sharing a little bit about his personal journey. Several of us were talking before Rand came in, and we all agreed because of his father Rand had about a 0 percent chance of getting our support. I was more impressed after the meeting, even though I still didn’t agree with him on several things.”

Demastus got to ask the first question of the senator, and he said he was disappointed with Rand’s answer.

“I asked him about his ‘let the states decide on marriage’ stance, and how we can stand by that when we have federal judges attempting to overturn our state marriage amendments across the country,” Demastus said. “He told me he didn’t think this was an issue that can be won legally, and that we may need to just do our own marriage thing in the church building.”

“It sounded to me like ‘let’s just retreat back to our churches and make our last stand there’ like the Alamo, and I just don’t agree with that philosophy at all. Rand was giving us a plan that just can’t be worked out in the real world, especially with our religious liberty under attack. When I asked him about that he pushed back against me, and never really answered my question. I don’t think he’s worked some of this stuff out yet to its ultimate conclusion. I’m a pastor of a modest church in Des Moines, so if I can ask him questions like this that stump him, what happens when he gets out on a national stage?”

Demastus also said that Paul did promise “to issue an executive order rescinding IRS regulations restricting what pastors can say and I do appreciate that.”

There is one key thing which Demastus whole-heartedly agrees with Paul.

“Rand is attempting to unite us with his movement to defeat a common enemy and I like that,” Demastus said. “I not only agree with him, but I think it’s an imperative. There’s no hope if we don’t do that, except the common enemy isn’t just Democrats. It’s whoever is against freedom no matter what party they’re in.”

Demastus says this time around he’s looking for someone that can unite enough limited government advocates and social conservatives to win the nomination, but he’s unsure Rand Paul is the right champion.

“If Ted Cruz is in the race I’d probably prefer him,” Demastus said. “I’ve met with Ted and listened to him, and he seems like the only guy who takes the stage without worrying about his political posturing. He can articulate what it means to be a conservative as well as just about anybody I can remember. He’s just as comfortable talking to us as he is talking to more liberty-minded groups. I think Cruz may be the superior guy to actually unite those two camps because he’s the better communicator.”