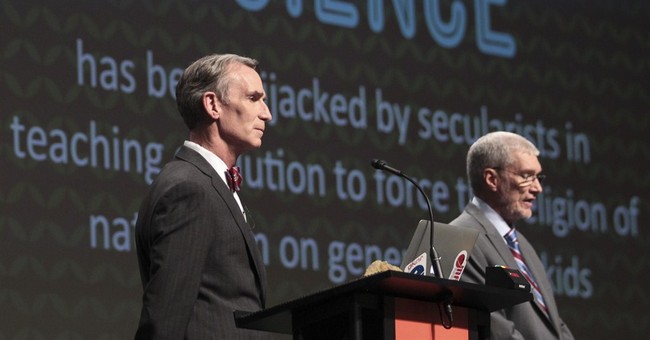 The highly-anticipated showdown between evolutionist Bill Nye “the science guy” and creationist Ken Ham of Answers in Genesis is now over. It remains to be seen in the days and weeks ahead if it changed any hearts and minds.

After watching the debate I still have a series of unanswered questions for Nye I’d love to get his answers to:

1. You admitted during the debate you don’t know where human consciousness and intelligence comes from, yet several times you also urged the audience to maintain your viewpoint’s current status quo dominance of the culture for the good of society.

But if you don’t know where the consciousness and intelligence comes from that guides human affairs in the first place, how do you know that what your advocating for is what’s best for society? How do you know whether or not the source of your belief system is a benevolent or malevolent force? Not to mention if we don’t know where intelligence comes from, how do we even know we know what benevolent and malevolent means? If what you believe has led to some good in human society, how do you know that believing the God of the Bible is the source of consciousness and intelligence wouldn’t make for an even better society?

Finally, why isn’t someone such as yourself, who claims to be so willing to pursue truth at all costs, at least a little concerned that he’s not even sure what the starting point for his entire belief system is? If you’re not sure how you started, how do you know you’re headed in the right direction? Do you really expect us to believe a brilliant man such as yourself really has no thoughts at all on where human intelligence and consciousness comes from? Surely you’ve thought about it beyond “I don’t know,” and we’d love to know what you think.

2) You admitted it was “a great mystery” what started the “big bang,” which you believe is the origin of human life and the universe.

If that’s what you really believe is the origin of all existence, then shouldn’t the primary investment of our scientific inquiry be devoted to solving that mystery? In fact, how can we truly judge the efficacy of scientific inquiry based on that assumption if we don’t have the answer to that question?

For example, if I don’t understand why an airplane was made to fly and whether or not the engineer that made it intended it to do so, I might just settle for driving the airplane down the street on asphalt since it has an engine and tires. The airplane is capable of doing so, and I wouldn’t know any better. However, if I know why the airplane happened to exist then I know it can do so much more than that, and the airplane can now realize its full potential.

How would I know what the airplane is ultimately for if I don’t know why it was made? I wouldn’t look silly driving an airplane down the street like any other vehicle unless we all knew it was meant to take to the air. But to know that requires me to know why it was designed that way and for what purpose.

You spent a good deal of time telling us what it is you didn’t like about Ham’s answers to those questions, but what are yours? You want us to assume your views and conclusions are what’s best for human progress, yet you won’t tell us what you think the purpose of human existence is in the first place? How do we know what’s best if we don’t know why we exist?

How do we know we’re progressing if we don’t know where we’re from? Suppose I looked on a map for the destination I wanted to go, but had no starting point. How would I know how to get to my destination? How would I know I’m making progress in the right direction?

3) Several times you referred to yourself as “reasonable.”

Does that mean to imply those that disagree with you are “unreasonable.” If so, that is very judgmental of you. Where do you get off imposing your definition of “unreasonable” upon the rest of us? Come to think of it, since you don’t know where human intelligence and consciousness comes from, I’m not even sure if I’m to be insulted of complimented by being called “unreasonable.”

4. You repeatedly referred to “Ham’s beliefs” and “Ham’s interpretations” throughout the debate.

Is Ham the only person in the world that believes this way? Does that mean you believe everyone that agrees with Ham is essentially a lemming incapable of thinking for themselves? How do we know that what you were asserting weren’t simply “Nye’s beliefs” and “Nye’s interpretations?” Only 15% of Americans believe as you do, that human life and the origin of the universe happened strictly through natural occurrences. If you’re concerned about Ham offending billions of non-Christians, why aren’t you similarly concerned about offending the other 85% of your own countrymen?

Suppose someone admitted “I’m not an astrophysicist” but then went on to criticize a very important research paper on the subject of astrophysics. Would you expect the leading scientific journals of the day to publish their critique as credible despite the fact they admitted up front they have no idea what they’re talking about?

6. In your heart of hearts, Bill, are you really willing to bet your eternal soul on your belief system? Are you really willing to stake what happens to you and your loved ones after you die on “I don’t know” and “that’s a great mystery?” Are you confident enough in your “I don’t knows” to wager your forever on them? Are you sure Jesus Christ isn’t alive? Did all of those men and women that voluntarily went to their deaths without a fight in order to testify to the truth of Christ’s resurrection really die for nothing? If he’s not, then how come we changed all of human existence, including how we even tell time, based on acknowledging that he is?

If you died today, are you 100% certain you have the right answers, and are you willing to face any consequences for the wrong ones? Because in the end, my friend, that’s really what we’re talking about here, isn’t it?