I Don't Think I Can Watch Football Anymore

Steve Chapman
|
Posted: Aug 31, 2017 12:01 AM
Share   Tweet
The opinions expressed by columnists are their own and do not necessarily represent the views of Townhall.com. 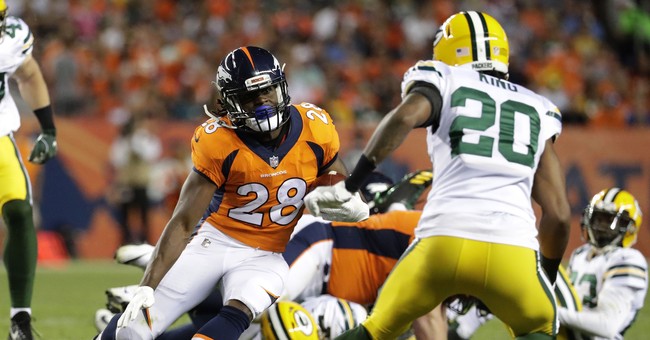 There are good reasons Russian roulette has never become a mass spectator sport. Not many fans want to see people competing to see who can cheat death and who will inflict lethal harm on his brain.

But it turns out we've been doing that for years, watching the most popular sport in America. Many of football's hazards are obvious: shredded knees, dislocated shoulders, broken ribs, even spinal cord injuries. But the worst one has been invisible. Football carries the high risk of irreversible, life-impairing brain damage.

The latest evidence came in a study of brains taken from deceased players conducted by Ann McKee, a neuropathologist at Boston University. Of 202 brains she examined, 177 showed evidence of chronic traumatic encephalopathy. Of the 111 from NFL players, 110 were diseased. CTE is a progressive, fatal condition that can cause memory loss, depression, psychosis and dementia.

This collection was not a representative sample. Many of the brains were donated because the men or their families noticed possible symptoms. But as The New York Times reported, about 1,300 former NFL players have died since the study began, and even in the unlikely event that all the others were unaffected, "the minimum CTE prevalence would be close to 9 percent, vastly higher than in the general population."

Nor are college or high school players safe. Of the 53 brains from men who played in college but not the NFL, 48 had CTE. So did three of the 14 who played only in high school.

The most debilitating part of the sport appears to be not the rare concussion but the regular, inevitable blows to the head that occur at every level. A study conducted by Stanford researchers on Stanford players found that in a game, the typical offensive lineman endures 62 such hits, each equivalent in force to driving a car into a brick wall at 30 mph.

Ask someone to give you a solid slap upside the head. Then consider how it might affect your mental functioning if your friend did it dozens of times once a week.

The risk of severe consequences for football is lower than risk for Russian roulette. But it should be too high for anyone who likes watching the game.

I've been one of those people since attending my first game at the age of 8. I've been to Soldier Field, Notre Dame Stadium, the Cotton Bowl, Kyle Field at Texas A&M and more. I have a son and a stepson who each played four years of high school ball.

My wife, a proud University of Texas alum, loves the college game and follows every school attended by anyone in our blended family, which means that in the fall, football is on most of every Saturday. I'd like to keep enjoying it.

But this season, I don't think I can. As the evidence accumulates, it becomes impossible to forget that what occurs on the field is a systematic, relentless attack on healthy young brains -- with consequences that may not appear for years but will inevitably appear.

Remaining a fan means trying to forget that some of the players I watch will become demented and die prematurely simply because they played. It means acting as though my entertainment is worth the sacrifice of their fragile brains.

It's tempting to think the risk can be greatly reduced with better equipment, rule changes, less tackling in practice and closer medical attention. But football is a game of collisions, and collisions subject the brain to violent impact. If you want to fix it, you have to eliminate blocking and tackling. That's called flag football.

Some parents have concluded the risk is intolerable. The number of high school players on 11-man teams has dropped nationally by 3.5 percent over the past five years, even though total student enrollment has risen. In Illinois, participation is down by 10 percent since 2011. Same in California.

McKee, the BU neuropathologist, grew up a devoted Green Bay Packers fan. In 2012, she told journalist Jane Leavy, "I love football. I'd like to put everything I know about it in another room when I'm watching it." But she can't quite do that. "At the end of the game, I think, 'How could I watch this?'"

Good question. With what we know today, it's like watching Russian roulette. The guns may take decades to fire, but they're all loaded.