Trump's Putin Crush, and Other Signs of Guilt

Steve Chapman
|
Posted: Jun 22, 2017 12:01 AM
Share   Tweet
The opinions expressed by columnists are their own and do not necessarily represent the views of Townhall.com. 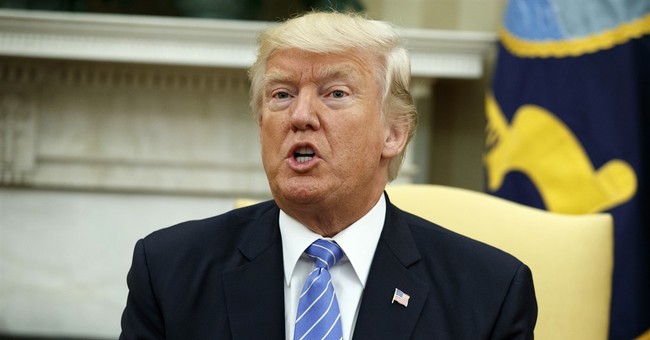 How do you identify the Trump supporters at a football game? Easy. They're the ones who leave at halftime. They assume they know the outcome. They don't realize the teams will return to the field. Or they think the game is taking way too long.

That's the equivalent of their belief that the suspicions of collusion between Donald Trump's campaign and Russian operatives have been dispelled and should not be pursued any longer. Since former FBI Director James Comey testified on Capitol Hill, the Trump camp has declared victory.

"After 7 months of investigations & committee hearings about my 'collusion with the Russians,' nobody has been able to show any proof," Trump tweeted. Sen. Mike Lee, R-Utah, insisted, "I have yet to see anything, even a scintilla. And so it's time to wrap this up." An article in National Review said Democrats have "all but given up on their quest to prove the Trump campaign colluded with Moscow."

Oh, really? Comey did say that when he left the FBI, Trump was not under investigation. But he didn't exactly pulverize the collusion fears. The Trump campaign, he said, was under investigation, even if the person in charge was not (at least not at the time Comey was fired).

Sen. Tom Cotton asked, "Do you think Donald Trump colluded with Russia?" Comey replied, "It's a question I don't think I should answer in an open setting." Some exoneration.

If Trump has not been directly targeted in the investigation of Russian interference, that doesn't mean he won't be. The possible director of a conspiracy is not necessarily the first to be investigated. More commonly, lower-level people are questioned first so evidence against higher-ups can be gathered. Each investigation follows its own timetable. Ken Starr's investigation of the Clintons took more than four years.

The lack (so far as we know) of direct evidence implicating Trump hardly proves that he or his campaign didn't work with the Kremlin. He publicly invited Russia to hack into Hillary Clinton's emails, which was collusion in plain sight.

People working for him had many contacts with Russian officials and businesspeople -- at least 18 calls during the final seven months of the campaign, according to Reuters. What were they talking about? Ice hockey? Borscht recipes?

A lot of evidence in criminal cases is circumstantial. It doesn't directly prove guilt but supports inferences of guilt. Trump's conduct offers a lot of evidence consistent with the theory that he was up to no good.

He has done business with Russian investors and met with Russian oligarchs. In 2008, son Donald Jr. said, "Russians make up a pretty disproportionate cross section of a lot of our assets." High-level Trump aides have exploited moneymaking opportunities in Russia.

Maybe all the contacts between Trump and his underlings and Russians were innocent. In that case, why have so many of them been concealed or denied? Deception is not proof of guilt, but deception is often employed by the guilty because they have so much to hide.

Another disturbing revelation is Comey's testimony that in his conversations, the president showed no interest in how Russian interference may have affected the campaign or could threaten our security.

That silence highlights the big thing Trump's allies overlook: his weird enchantment with Vladimir Putin and his eagerness to excuse Russia's hostile behavior. This is not normal for a president, particularly a Republican. And no one has a reassuring way to explain the infatuation.

It could be Trump is naive. It could be he has some clever plan that is not apparent even to members of his own party. But darker explanations are more plausible. Maybe he has business interests in Russia to protect. Maybe he secretly collaborated with Putin to defeat Hillary Clinton. Maybe Putin has information he is using to blackmail Trump.

The president's fierce aversion to transparency is not comforting. He has refused to release his tax returns, which could shed light on any business he's done there. He fired Comey for delving into the Russia matter. He repeatedly rails against those conducting the probe.

Those recordings he implied he has of his sessions with Comey have yet to emerge. He said he is "100 percent" willing to say under oath that Comey lied. If you believe that, I've got a Trump golf course in Siberia to sell you.

In demanding a quick end to it, his defenders don't sound confident the investigation will validate his innocence. They sound terrified it won't.