Putin in Syria: So What? 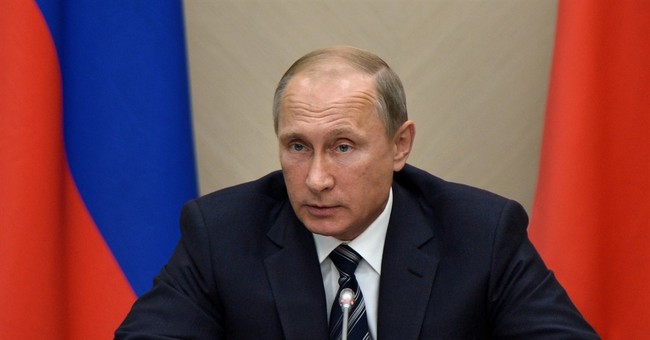 Trending
Vladimir Putin is having a field day in the Middle East. He has sent Russian planes to bomb rebels in Syria. He has reached an intelligence-sharing agreement with Syria, Iran and Iraq. At the U.N. Monday, he reaffirmed his commitment to Syrian President Bashar al-Assad. He seems determined to fill the regional vacuum allegedly left by the United States.

What should the Obama administration do? Let him.

Republicans regard this as a calamity. But what's the downside? There are two main ways this gambit could go. And neither would be a bad deal for us.

The first possibility is that he will inflict significant damage on Islamic State. In that case, one of our most vicious enemies would be weakened -- at little cost or risk to Americans. The only thing better than defeating Islamic State is getting someone to do it for us.

In that scenario, of course, another enemy, Assad, would survive. But someone named Assad has held power in Syria since 1970. We managed fine before this civil war. If Putin can bring it to an end with the Assad government still in power, we'll manage fine afterward.

The second possibility is that Putin will fail: His bombing raids will prove unavailing, the insurgents will gain ground, and the regime will be in jeopardy. Then he may be forced to send ground troops.

He could find himself in a costly, bloody war. Or he might decide the prize is not worth the effort and pull back, which would dash his dreams of regional power and discredit him at home. Either way, he's worse off, and we're not.

Why should we stand in his way? It's not as though we have a better plan. President Barack Obama has largely stayed out of the Syrian war because 1) there are no "moderate" rebel factions with a plausible chance of prevailing, 2) he's never been willing to take the risks of intervening in a way that would matter, and 3) the outcome could be awful even if we somehow got our way.

Critics regard Syria as a colossal tragedy that Obama could have prevented. More likely, it's a colossal tragedy that he could not have prevented. Removing a hostile regime by force, as we learned in Iraq and Afghanistan, is not a ticket to tranquility. Syria is a disaster. But it's a disaster that has claimed no U.S. soldiers and very little U.S. money.

The assumption is that anything Putin seeks in the Middle East will come at our expense. Marco Rubio declared, "Putin wants nothing less than the recognition of Russia as a geopolitical force." I hate to break the news to him, but Russia is already a recognized geopolitical force. Those alarmed about Putin supposedly displacing us in the region mistake symbolism for substance.

His latest move suggests anxiety, not strength. If Assad falls, Russia stands to lose its only naval base outside of the old Soviet Union -- not to mention its closest ally in the Middle East.

For a long time, the U.S. has been the dominant military power in the region. What has been so great about that? Instead of making us safer, our role has given us more enemies. If Putin wants to invite jihadists to turn their attention from attacking America to attacking Russia, more power to him.

We got involved in the region mainly to assure access to Persian Gulf oil. That imperative is less urgent than before, since we are producing more oil at home and consuming less. In any case, the U.S. is not about to leave and let the chips fall where they may. Our power has rested mainly on our navy, whose continued presence and supremacy are not in doubt.

Plenty of countries in the region will lean toward us regardless of what Putin does -- including Saudi Arabia, Jordan, the United Arab Emirates and Israel. Others will be uncooperative regardless, notably Iran. Russia's venture isn't likely to make much difference either way.

Obama's critics portray him as weak and lost in the face of the bold Russian challenge. But the truth is he's engaged in geopolitical jujitsu, using the opponent's strengths against him. He's avoiding risks that carry no commensurate rewards.

The president understands that we don't know how to restore peace and stability to Syria. Putin probably doesn't either, but he may have to find out the hard way.