The Real Meaning of the Hobby Lobby Decision 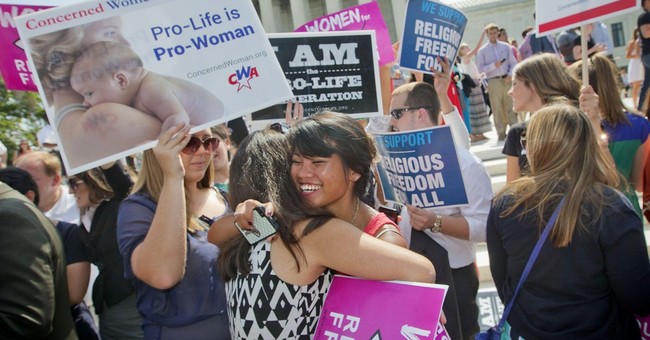 Trending
Organizations concerned with public policy have a habit of hyping developments that relate to their concerns. When the Supreme Court ruled that some corporations are exempt from paying for employees' contraceptive coverage under Obamacare, both sides loudly trumpeted its importance.

In the first place, the number of companies who will demand or qualify for the exemption is small. University of Virginia constitutional scholar Douglas Laycock told me that religious liberty claims by businesses like those here "almost never arise. These were cases where the owners unanimously agree on the religious commitments of the business and have demonstrated that over time." That doesn't happen very often, and regulations that genuinely conflict with those commitments are rare.

Critics claim the ruling will allow countless companies to deprive female workers of health insurance coverage for birth control. It doesn't. In fact, one major reason the court was willing to provide this accommodation to Hobby Lobby and other closely held corporations is that the administration can easily assure coverage for those women.

Some religious universities and hospitals had also objected to being compelled to pay for contraception. So the Department of Health and Human Services devised an alternative to spare them having to do so.

If an institution objects to providing the coverage, its insurance company has to provide it separately to employees, at no extra cost. Writing for the court, Justice Samuel Alito said, "HHS has provided no reason why the same system cannot be made available when the owners of for-profit corporations have similar religious objections."

If it were made available, he noted, the effect "on the women employed by Hobby Lobby and the other companies involved in these cases would be precisely zero. Under that accommodation, these women would still be entitled to all FDA-approved contraceptives without cost sharing."

That doesn't sound like the court is waging a merciless war on women. It also doesn't sound like Christian conservatives have a lot to cheer about. In giving them a victory in this case, the justices pretty well doused their hopes in related cases.

Those cases involve religious institutions that object not only to being required to provide contraceptive coverage, but also to the HHS alternative. The University of Notre Dame has sued, claiming that having to notify the feds of its objection violates its religious freedom. So has Wheaton College. An order of nuns called Little Sisters of the Poor is also challenging the procedure.

Their argument was always a reach. Filling out a form claiming an exemption is not much trouble. Nor does it make these institutions complicit in sin: The insurers have to provide the coverage even if they don't fill out the forms.

In this instance, Judge Richard Posner of the 7th Circuit Court of Appeals said in ruling against Notre Dame, the odd thing is that "the beneficiaries of the religious exemption are claiming that the exemption process itself imposes a substantial burden on their faith." He compared it to a conscientious objector asking out of the draft while insisting that the government not draft anyone else instead.

But the way the court framed the Hobby Lobby opinion makes it even less likely to succeed. The justices in the majority, who stressed that the government can use an alternative means of providing contraception, are not likely to turn around and say the alternative is illegal.

The conservative alarms about the alleged threats to religious freedom are way overblown. But there is something to be said for government policies that let people of strongly held opposing views go their separate ways.

Religion has always been an emotional topic with great potential to provoke conflict among people of different faiths. The genius of our system is that it allows them to coexist, even if they deeply detest each other, by giving every group the space in which to follow one god or many gods or no god.

The ultimate resolution of the contraception issue in Obamacare will probably leave everyone dissatisfied. You could call that a curse. Or you could call it a blessing.