The Real Clunkers in this Deal 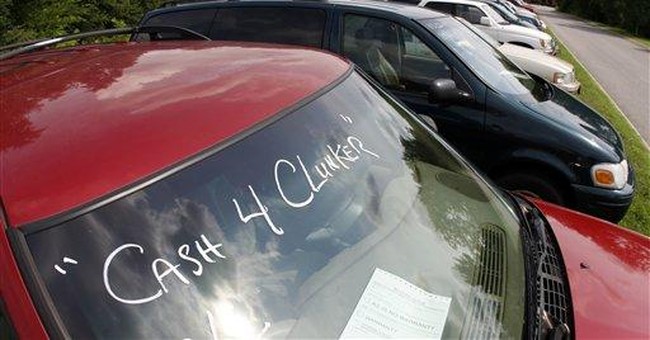 Cash for Clunkers has been a thrilling moment for advocates of expanded government, who say it proves what we can accomplish when our leaders put their minds to it. They are absolutely right. The program proves the federal government is unsurpassed at two things: dispersing money and destroying things.

Of course, it already proved that in Iraq. But for sheer rapidity of confirmation, this program is hard to beat. Cash for Clunkers managed to go through a billion dollars in about four days, vaporizing a fund that was supposed to last until Halloween.

The spectacle was particularly heartening to supporters of President Obama's fiscal stimulus plan, who had been disconsolate to find that when Washington attempts to embark on a sudden $787 billion spending spree, as it did last February, it needs months or even years to burn through the cash. Not only that, but it gave Congress a great excuse to throw more money onto the pyre.

In a period when financial pressures are forcing us all to adopt the forgotten ethic of "use it up, make it do, wear it out," the initiative is a throwback to the more extravagant days of 2007, when we were all spending like there was no tomorrow. It requires Washington to borrow funds to pay people to scrap perfectly functional vehicles merely because they get 18 miles per gallon or less, to subsidize cars that get 22 mpg or more.

The incentive is supposed to give a big boost to energy conservation. But there is less here than meets the eye, because it assumes the new owners will make no changes in their behavior. In fact, if you swap a gas hog for a less thirsty model, you'll probably drive the new vehicle more miles than you drove the old one, because each mile will cost you less.

In many households, the results could be perverse. Say you've got a 5-year-old Volkswagen Passat and a 10-year-old Ford F-150 pickup. Whenever possible, you drive the Passat, which gets 27 mpg overall, and use the truck only when you have to.

But now you have a shiny new Toyota Camry that gets 23 mpg. So it gets the bulk of your miles, while the VW sits in the garage. In the end, you'll send more money to Riyadh than before.

Not everyone will operate this way. But enough people will that the fuel savings is sure to fall short of the rosiest expectations.

Likewise with the stimulus. Right now, it looks as though Cash for Clunkers is a blessing to automakers and the economy because it's induced consumers to buy cars they wouldn't have bought. Actually, a lot of the vehicles would have been purchased regardless -- just not right this minute.

Some people undoubtedly put off shopping for a car back in May or June to get in on the deal. Others who were planning to wait until fall or winter to get rid of the old beater decided to act sooner. Just because dealers are selling more cars right now doesn't mean they'll sell more cars overall. If the program gave the economy a jolt in July, it will be a drag in December.

The buying frenzy is widely interpreted to mean that Congress and the administration did a brilliant job of designing the plan. George Mason University economist Russell Roberts contends on his Cafe Hayek blog that it proves just the opposite.

If you put your house on the market and immediately get 10 offers at the listed price, it means you should have asked for more. The stampede, says Roberts, indicates the subsidy ($3,500 or $4,500 per trade) was too rich and the government could have gotten "the same effects with a much smaller amount."

As it is, the House and Senate quickly allocated another $2 billion to consign more cars and trucks to the scrap heap. Isn't that just like our government? A lot of money spent and a lot of wreckage left behind.