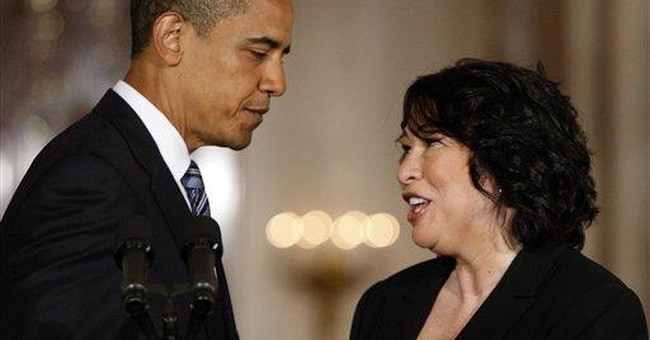 Some people are unhappy to hear President Obama suggest that attributes like gender, ethnicity and "empathy" are critical in choosing a Supreme Court justice, and it's hard to blame them. When I hire a lawyer, I don't care about that person's ancestry, complexion, theological preoccupations, reproductive equipment or personal warmth -- I care about getting the best advice and representation.

Likewise for Supreme Court justices. Find me a tedious brainiac who reads the Constitution exactly as I read it, and I don't care if that person would fit in at the Chapman family reunion. Reducing a selection for a vitally important office to a demographic formula is not the path to sound constitutional interpretation.

This is not to deny the value of a diversity of backgrounds and experiences in an institution like the Supreme Court. We all understand the world through our personal environment, and the more exposure we have to other people's experiences and perspectives, the better off we are.

A daughter of Puerto Rican parents raised in a housing project may have insights into police abuses or the drug war or regulation of taxicabs that a white man who grew up middle-class in Indiana would not. The white guy, however, might also know some things she wouldn't.

But that is a long way from asserting, as Sotomayor has, that "a wise Latina woman with the richness of her experiences would more often than not reach a better conclusion than a white male who hasn't lived that life." A wise Latina, like a wise WASP male, understands she has no monopoly on rich experiences or vital truths. She values what her life has offered without letting herself be constrained by it. If she's a judge, she recognizes her obligation to strive for impartiality.

So conservatives have reason to be wary of Sotomayor's approach to judging. But it's a little late for most of them to decry identity politics. Few objections were heard from Republicans in 1991, when President George H.W. Bush decided that the ideal person to fill the vacancy left by Thurgood Marshall, the court's first black justice, was Clarence Thomas, who just happened to be black as well.

Bush did his best to have it both ways. He insisted that race was irrelevant and that Thomas was simply the "best qualified" candidate in the country. But he also said, "(I)f credit accrues to him for coming up through a tough life as a minority in this country, so much the better."

Back then, conservatives played the identity game gingerly, as if they were slightly embarrassed. But they have since learned to make the most of it. The most recent and regrettable example is Sarah Palin, lustily cheered by Republican audiences last year not because she had the credentials and ability to step into the presidency, but because she was the Right Kind of Person.

First, she was a woman, picked to attract disappointed Hillary Clinton supporters, as Palin shamelessly highlighted: "Hillary left 18 million cracks in the highest, hardest glass ceiling in America. But it turns out the women of America aren't finished yet, and we can shatter that glass ceiling once and for all."

Second, she was not one of those effete urban elitists but a real American -- small-town girl, beauty queen, hockey mom, "Bible-believing Christian" (as she put it), mother of five and moose hunter.

Rep. Robin Hayes, R-N.C., said she was controversial because "liberals hate real Americans that work and accomplish and achieve and believe in God." Palin herself celebrated her brethren from small towns, which she called "all of you hard-working, very patriotic, very pro-America areas of this great nation."

Of course it's useful to include the perspective of small-town residents in formulating policy, just as it's a good idea to consider the impact of laws on Latinos. But to imagine that either group -- or any group -- has a unique claim to wisdom or goodness is only to prove that no group is immune to foolishness.