Why the Senate Should Seat Burris 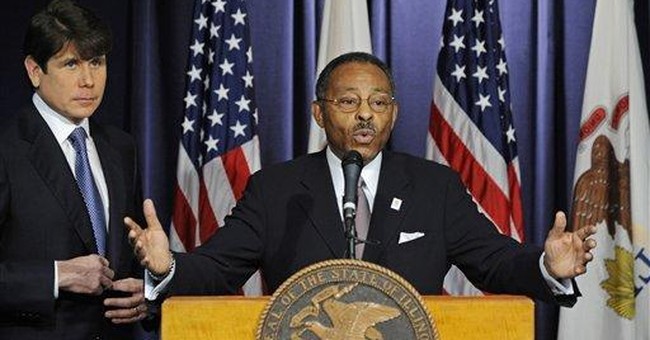 One of the axioms of American democracy is that we are a government of laws, not of men. We are supposed to follow the requirements of our Constitution and statutes even when they yield results we dont like -- say, freeing a person who appears guilty. We are about to find out if Democrats in the U.S. Senate want to follow the rule of law or indulge their own preferences.

Given his pending indictment and impeachment, it took a lot of gall for the governor to act. But the facts remain: He is the governor, and state law confers on him the unchecked authority (and, by implication, the responsibility) to fill a vacant U.S. Senate seat when the term has less than two years to run.

The Illinois General Assembly could have acted years ago to require special elections in such circumstances, or it could have acted last month. But it didnt. Which means Blagojevich has every bit as much right to name a successor as he does to veto legislation, administer the budget and sleep in the governors mansion.

Democratic senators find these facts inconvenient. So, in a show of unity, they say they will refuse to let Burris take his seat. In the event he shows up on Capitol Hill to begin his new job, The Chicago Tribune has reported, "armed police officers stand ready to bar him from the Senate floor."

The senators insist they may shut the door to Burris because the U.S. Constitution says, "Each house shall be the judge of the elections, returns and qualifications of its own members." But that doesnt mean the right to exclude anyone they wish. If it did, a Democratic Senate would be perfectly entitled to refuse to admit any Republican, and vice versa.

What it means is that the Senate may ensure members meet the requirements established in the Constitution. Each senator is supposed to be at least 30 years old, a U.S. citizen for at least nine years and a resident of the state he or she represents.

In a 1969 case involving Adam Clayton Powell Jr., who was barred from the U.S. House of Representatives because of corruption allegations, the Supreme Court said that "in judging the qualifications of its members, Congress is limited to the standing qualifications prescribed in the Constitution" and that "since Adam Clayton Powell Jr. was duly elected by the voters of the 18th congressional district of New York and was not ineligible to serve under any provision of the Constitution, the House was without power to exclude him from its membership."

Nor does it matter that Powell was elected by his constituents and Burris was not. Its not Burris fault that there was no election. Like Powell, he secured his seat under the procedures set out by his state.

Its far more plausible to say that the Senate isnt obligated to accept Burris if his appointment involved illegality -- say, if he promised Blagojevich something tangible in exchange, as the governor allegedly sought from other prospects. But so far, no one has alleged, much less proven, anything of the kind. Its one thing for the Senate to conduct an investigation to remove all doubt. But it shouldnt use that pretext to endlessly delay what it cant legally prevent.

If the Senate thinks Blagojevichs presumption is intolerable, after all, it has another option, and one explicitly sanctioned by the Constitution: Seat Burris and then expel him.

The problem is that would require a two-thirds vote, and Republicans might not be willing to go along. For that matter, some Democrats might balk at inflicting such a harsh punishment on someone whose only sin is an excess of ambition and vanity -- which is not exactly rare in Washington.

When faced with a result that accords with the law, senators have a duty to accept it. In this instance, it wont be pleasant. But if the rule of law only told us to do what is pleasant, we wouldnt need it.