The High Price of Pretense 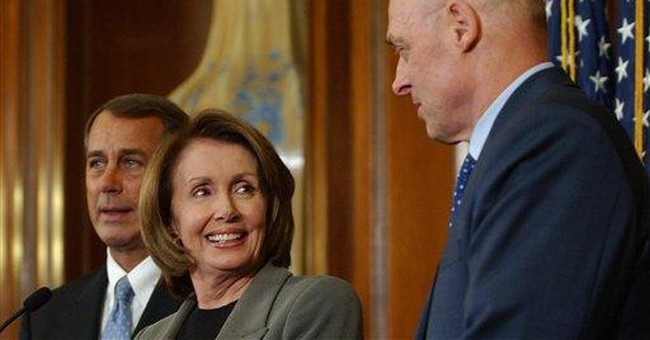 Washington, D.C. is a place where delusions go to thrive. That explains why Congress and the president are now agreed on remedies that will not work, expending money they do not have, to fix a problem that may not exist.

The alleged problem is a recession. From the sounds of panic, you would assume we are already in a deep downturn. In fact, that does not appear to be the case, and many economists doubt we will have a recession (defined as two consecutive quarters in which total economic activity declines) at all.

The Congressional Budget Office, for example, predicts the economy will grow by 1.7 percent this year. A couple of weeks ago, The Wall Street Journal surveyed 54 economic forecasters, who on average put the chance of a recession at 42 percent and expected growth to approach 2 percent in the first half of this year.

Steven Wieting, an economist at Citigroup, predicts growth of 1.2 percent. But like our elected officials, he sees no point in getting hung up on technicalities. "Academic definitions aside, we'll call that a recession," he writes in a new report. We can call it a recession or we can call it a wirehair terrier, but that won't change what it actually is: an expansion, albeit a modest one.

Notwithstanding that, President Bush and House leaders have agreed to pelt the economy with $150 billion in rebates and business tax incentives to rouse it from its lethargy. The idea behind the rebates is that consumers will use the cash to buy goods and services, keeping companies and workers busy supplying them. Business tax incentives are supposed to goose investment in plants and machinery. The two sides are agreed, in the mantra of the week, that these measures will be "timely, temporary and targeted."

In their dreams. Timeliness, in this case, is not unlikely -- it's impossible. The Internal Revenue Service, it seems, is fully occupied at the moment sending out tax forms and processing returns, and will be for a while. So even if the program zips through the Senate, the checks probably won't go out until June and won't all reach the beneficiaries until August. The money itself will take months to be spent, if it gets spent at all -- postponing the intended boost until next football season.

If a recession is already underway today, it could very well be over by then. This is the equivalent of a doctor telling a patient that she may have pneumonia and promising to put her on antibiotics -- in October.

Targeted? Sure, if you define the target as the broad side of a barn. The Treasury checks would go to 117 million families, or three out of every four families in America. Couples with incomes all the way up to $174,000 would be included.

The business provisions, which let companies write off investments faster than usual, are equally indiscriminate. The purpose is to spur purchases that otherwise wouldn't be made. But as Brookings Institution economist Douglas Elmendorf told me, the break will apply to other investments as well. "It's safe to say that more than 90 percent of the lost business tax revenue will simply subsidize investment that would have occurred anyway," he says. Even by Washington standards, a bill that squanders nine out of every 10 dollars is not a model of efficiency.

Temporary? The rebates and business breaks may vanish like leaves in autumn, but the fiscal consequences will endure. This year's federal budget deficit was already expected to hit $250 billion, according to the CBO, and the stimulus would pile on another $150 billion. So taxpayers, current and future, will have to shoulder more each year to finance the federal debt -- interest on which already swallows up 10 percent of federal revenues.

So, contrary to its billing, the package is likely to be tardy and scattershot, with a lingering, bitter aftertaste. Even if it could be implemented perfectly, though, it might still be a futile endeavor. Alan Auerbach, an economist at the University of California, Berkeley, looked at past fiscal policy initiatives and found "little evidence that these effects have provided a significant contribution to economic stabilization, if in fact they have worked in the right direction at all."

In other words, we may spend a lot of money to accomplish nothing. Note to our leaders: We can do that for free.