Stephen Moore
|
Posted: Mar 16, 2021 12:01 AM
Share   Tweet
The opinions expressed by columnists are their own and do not necessarily represent the views of Townhall.com. 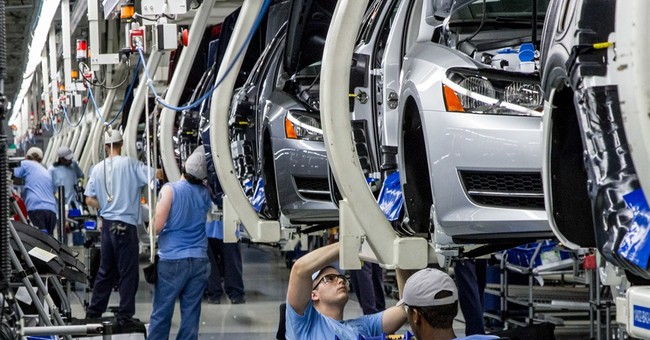 In 1978, when I was 17 years old, I worked as an usher at concerts and sporting events earning $2.25 an hour, the minimum wage. I had to surrender about 15 cents of this meager hourly wage to a union I was forced to join. I could never understand what a union was doing to help me since the company had the legal requirement to pay me $2.25. I was infuriated over the principle of this confiscation by labor bosses I had never met.

I wanted out of the union, but they told me I must pay dues to keep the job. Shouldn't there be a law against this type of coercion?

There is, actually. It is called the First Amendment. The right of association is not explicitly listed in the Bill of Rights. Still, the courts established this "fundamental right," ironically enough, in 1958 in the landmark Supreme Court case NAACP v. Alabama. Crucially, the courts declared that "the First Amendment protects a right to associate and a right not to associate together."

I was thinking about this when I watched the viral video of Rep. Tim Ryan, the Ohio Democrat, on the House floor slamming Republicans for opposing the Protecting the Right to Organize Act that would force tens of millions to join a union.

"Heaven forbid that we pass something that's going to help the damn workers in the United States of America," he fumed. "We talk about giving the right to organize; you (Republicans) complain."

The left lionized him as a champion for the little guy. But hold on there, Congressman. No one is saying that unions should not exist or that they should not be able to organize. I would be first in line to defend their First Amendment right to do so.

In 27 states, voters have adopted right-to-work laws that prohibit forced union participation. Those laws are popular with voters and workers. Mark Mix, the president of the National Right to Work Committee, which defends nonunion workers' rights, said that "almost every attempt to repeal RTW laws and create 'closed shops' by Big Labor has been soundly beaten on the ballot or in state legislatures." That's why the union bosses are running to Congress.

There are good reasons why blue-collar workers may not want to join a union. The corruption with Big Labor has been so rampant with union bosses taking high six-figure salaries, parties, and spending union dues on junkets to Hawaii and the Caribbean that workers have said they want out. Unions also donate tens of millions of dollars of worker dues to Democratic politicians. In many unions, as many as half of the rank-and-file workers on the line aren't even in favor of the Democrats. They are Trump-voting Republicans.

High-performing workers also don't want to be under the umbrella of "collective" bargaining agreements because they want to get pay raises above what low-performers and shirkers earn. Union laws often prevent productive workers from getting more, just as teachers unions all but prevent poor-performing teachers from getting fired.

For whatever reason, millions have freely decided they don't want to be in the union. How is Ryan helping them by taking away that freedom to choose, which is another core principle I thought Democrats believed?

That raises one last question for Ryan and his Democratic House colleagues, nearly all of whom voted for the Protecting the Right to Organize Act. Rather than force states such as Florida, South Carolina and Utah to adopt the policies that have economically crippled New York, Illinois and New Jersey, why not encourage the worker freedom policies that are standard fare in the economically high-flying states.

Workers should think about this: If all 50 states become forced union states, where will the jobs go next? Probably China and Mexico.