Stephen Moore
|
Posted: Sep 24, 2019 12:01 AM
Share   Tweet
The opinions expressed by columnists are their own and do not necessarily represent the views of Townhall.com. 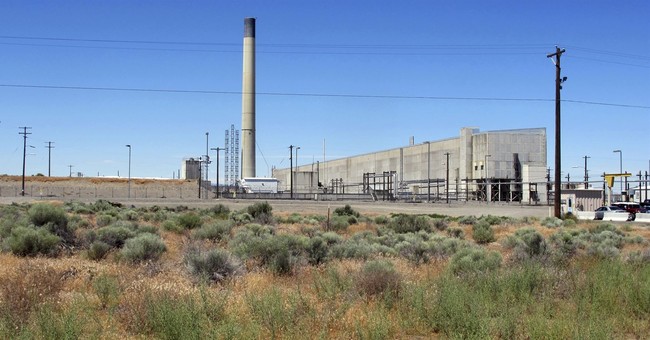 The decline of American mining and production of critical minerals in recent decades is a self-inflicted wound that could imperil our economy and national security.

Data from the latest federal geological survey showed the United States has become 99% dependent on imports for at least 20 critical and strategic minerals, not including each of the rare earth minerals, even though we were No.1 in mining output across the world as recently as 1990.

Uranium is a perfect case in point. In Western states such as Arizona, Utah, Colorado, New Mexico, Wyoming, Nebraska and Texas, the United States has massive domestic uranium resources and reserves. But incredibly, more than 90% of U.S. uranium requirements are now imported.

Although many of the imports come from Canada and Australia, more than 40% of the total U.S. uranium imports originate from a potentially adversarial trading bloc: Russia and two of its former satellites, Kazakhstan and Uzbekistan.

This is not a friendly free-market group that America can depend on, especially in an emergency.

There is a rapidly rising share of uranium production coming from state-controlled companies not located in Western market-based economies. Worse, the amount of uranium imported to the United States from state-owned companies is now close to what is supplied by our allies Canada and Australia combined.

The state ownership of Rosatom -- Russia's state nuclear energy corporation -- is so highly subsidized at the expense of the Western uranium mining industry that even Canada and Australia are also being undercut by Rosatom's cheap uranium pricing.

The Chinese have also significantly grown their state-owned nuclear enterprises, including acquiring additional uranium from Namibia. While the United States does not import significant quantities of uranium from the Chinese, they have announced their intention to penetrate the U.S. nuclear market. They are also an unreliable trading partner.

In addition, several domestic issues contribute to dwindling U.S. production, including some states' environmental laws and regulations that are overtly anti-mining. Also, a parade of never-ending nuisance lawsuits by well-funded nongovernmental organizations aim to force closure of uranium mines currently on standby. Also, the high cost of maintaining nonproducing uranium mines -- and mothballed processing facilities placed on standby -- is also a detriment.

Here are two recent examples of how we have impaired our domestic mining industry: First, Barack Obama shut off some of the highest grades of uranium production in the United States in 2012. Second, states including Virginia banned uranium mining and won a U.S. Supreme Court ruling upholding the bans.

A presidential memorandum issued in July ordered the formation of a Cabinet-level working group to find acceptable solutions to the U.S. uranium mining dilemma -- what President Trump referred to as a "national security concern." Were the U.S. uranium mining industry to disappear, the prospects of a timely and strategic comeback confidential could be severely impaired, and costs of reviving the industry might be prohibitive. Uranium mining in this country could be "lost" entirely, and the aging, disappearing workforce makes a comeback more problematic.

Too bad, because so much attention has been appropriately devoted to ensuring the reliability and safety of the American electric grid system. Civilian nuclear plants provide critical baseload power that keeps the grid stable. Nuclear energy provides almost 20% of that capability and more than half of the nation's carbon-free power. Nuclear power production could even increase modestly because some on the left have suggested that more nuclear power may be a way to further reduce greenhouse gas emissions.

President Trump will soon be presented with the working group's recommendations to alleviate America's uranium crisis.

We don't know what the best solution is. We don't support trade protectionism. As Heritage Foundation energy analyst Katie Tubb has noted: "Even the Defense Production Act empowers the Pentagon to prevent critical shortages in a way that does not include trade barriers that treat allies the same as unfriendly nations." Imports from Canada are not a problem.

The problem is the imports that come from nations that are not allies. Cheap uranium imports from those nations can appear to be a blessing to American nuclear power producers and energy consumers, but we are not talking about toys, tomatoes or household items here.

The strategy of benign neglect is not working and must be replaced with a smart strategy that ensures reliable and affordable uranium for years to come.