Stephen Moore
|
Posted: Feb 27, 2018 12:01 AM
Share   Tweet
The opinions expressed by columnists are their own and do not necessarily represent the views of Townhall.com. 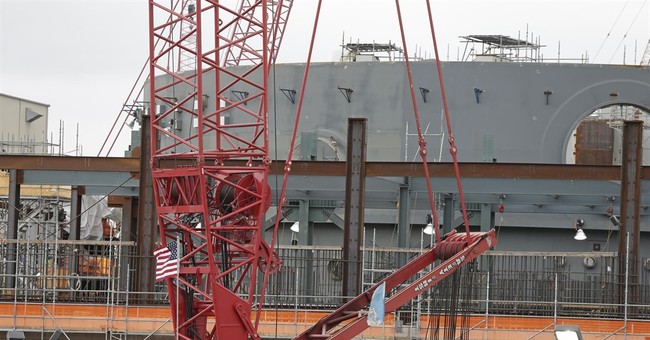 This has been a colder-than-usual winter in the Midwest and Northeast, so many Americans are facing high home heating and electric bills. In some areas, these bills can reach $1,000 a month.

Liberals, of course, charge that Donald Trump is the culprit. An AP story last week screamed: "Trump Once Again Wants to Cut Energy Assistance to the Poor." Vermont Sen. Bernie Sanders charged that if Trump has his way and eliminates the Low Income Heating Assistance Program, people might "freeze to death."

But wait. Donald Trump is pro-American energy development. He isn't the one who is making energy bills more expensive in the Northeast and the mountain states. It's the liberal green groups and politicians such as Bernie Sanders, who accede to their anti-fossil fuel demands.

In my book Fueling Freedom, my co-author Kathleen Hartnett White and I discovered that the shale gas revolution lowered the price of natural gas by about two-thirds (from $10 to $3 per million cubic feet). This, in turn, has meant big savings in electricity and home heating costs from where they were a decade ago. We calculated the benefits to poor households from these lower prices and estimated that shale gas results in $10 billion in consumer savings each year. The annual budget for the LIHEAP program is about $3 billion. So shale gas is saving poor families three times what LIHEAP does.

Yet the left-wing politicians who say how shameful it is to cut energy assistance are the ones who want America to stop producing shale gas by banning fracking and other modern drilling technologies that make natural gas so cheap.

If the goal is to provide cheap energy for low-income Americans, fracking is many times more effective than LIHEAP.

The story doesn't end there. Home heating and electric bills would be much cheaper still for poor families without the so-called renewable-energy standards pushed by greens and liberal politicians at the state and local levels. The Manhattan Institute has found that states with these wind and solar mandates have had much larger hikes in utility costs than states without them. New York, which is revving up its green energy policies, charges its residents 40 percent more for electric power than the national average.

I'm still not done. Professor Bernard Weinstein of Southern Methodist University has examined why utility prices have spiked so much in the Northeast: "New England and New York are using imported liquefied natural gas (LNG), which is much more expensive than domestic gas, to satisfy nearly 20 percent of their heating and electric power needs," Weinstein found. "Some of this imported gas has come from Russia, despite current international sanctions."

Imported natural gas? How can a nation with massive deposits of very cheap natural gas -- such as the Marcellus Shale in Pennsylvania and West Virginia -- be importing natural gas?

One reason is that we don't have pipelines to inexpensively transport the natural gas to the Northeast. Environmentalists who hate oil and gas have spent years blocking this vital infrastructure -- not just the Keystone Pipeline but also many other pipelines that should be transporting shale oil and gas efficiently across the country. It doesn't seem to bother the green groups that the biggest victims of anti-fossil fuel policies are low- and middle-income Americans. Never has.

Environmentalism is effectively a regressive tax on America's poorest households, imposed upon them by liberal politicians and the rich liberals who fund them, such as Democratic donor-extraordinaire Tom Steyer.

Amazing, isn't it, that this same crowd turns around and attacks Trump for forcing poor people to pay more for energy. If you have sticker shock when you pay your energy bill this month, at least you now know whom to thank -- and it ain't Donald Trump.