Tax Plan Is a Cut for Everyone

Stephen Moore
|
Posted: Dec 05, 2017 12:01 AM
Share   Tweet
The opinions expressed by columnists are their own and do not necessarily represent the views of Townhall.com. 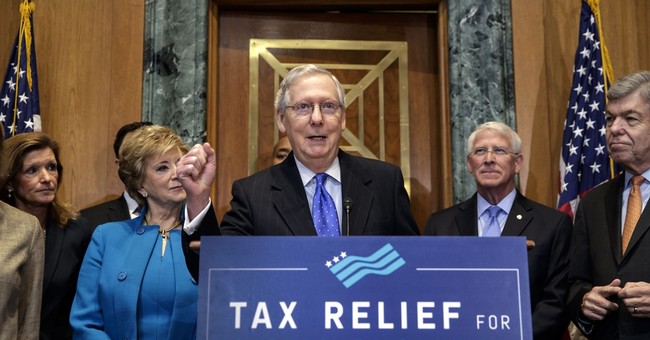 One of the ironies of the left's "these are tax cuts for the rich" mantra is that many upper-income people I know in states such as California, New Jersey, and New York complain to me they are getting a sizable tax increase. The lower income-tax rates don't compensate for the loss of the state and local tax deductions.

Well, yes, under the Trump tax plan we are no longer going to subsidize big government in blue states. Now those who choose to live in blue states are going to have to join with their neighbors, collect their pitchforks and demand tax and spending cuts from city hall and the state capital.

Liberals from blue states argue that red states tend to get more money from the feds and pay less in taxes. But here again, blue state voters are the ones responsible for these inequities. Blue staters tend to send liberal politicians to office, who then vote for bigger federal spending -- even though a greater share of the money goes to the red states. Maybe somebody needs to write a book called: "What's the Matter With Massachusetts."

What is not true is that the rich get all the benefits of the tax cut and middle-income families pay more.

CATO scholar Chris Edwards recently put the lie to that claim. He examined the impact of the tax bill on the average tax filer in every income group with an income above $40,000. He didn't include people who make less than that because very few in that income range have any income tax liability -- and you can't cut taxes on people who don't pay taxes.

By the way, the left also leaves out another impact of the tax cut that helps the middle class: a higher stock market. Some 54 million Americans have 401(k) plans. At least another 40 million have IRAs or pension plans. Where do you think that money is invested? Americans should look at their 401(k) accounts right now. They are surging in value in anticipation of the tax cut.

This has contributed to a surge of economic optimism and Christmas shopping and spending. You want to kill the economy -- and Christmas? Follow Chuck Schumer and Nancy Pelosi's advice and kill the tax cut.

That's not likely to happen. There is a high likelihood this tax cut will be enacted before Christmas. My friend Arthur Laffer says that he hopes taxes go up for everyone next year -- because Americans are going to be making a lot more money as prosperity spreads to every state. Talk about a happy New Year.