Stephen Moore
|
Posted: Aug 23, 2016 12:01 AM
Share   Tweet
The opinions expressed by columnists are their own and do not necessarily represent the views of Townhall.com. 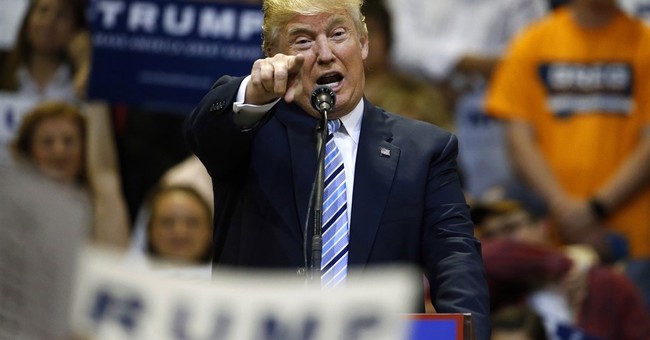 I asked a successful businessman the other day what he thought about Donald Trump. He turned his thumb down. Wow. "Are you going to vote for Hillary?" I asked with trepidation. "Of course not," he replied, almost insulted by the question. "I understand the concept of a binary decision."

I got a similar response when I asked oil magnate T. Boone Pickens whether he would vote for Trump. He looked at me with a quizzical expression and replied: "Well, who else is there to vote for?"

Right. Who else is there? Yet, amazingly, a caucus of lifelong Republican politicos in Washington are announcing to the world with defiance and self-righteousness that they will vote for Hillary Clinton.

They are mostly former Mitt Romney and George W. Bush operatives. They lost, and now they want people to believe that their anti-Trumpism is a principled act of heroism. They ingratiate themselves to The New York Times, Washington Post and team Clinton -- the sworn enemies of free markets and conservative values.

I certainly don't mean to disparage conservatives who say they won't vote for Trump. One's vote is a matter of personal conscience. But to actively support Clinton is to put the other team's jersey on and then run a lap around the stadium.

It's worth examining the case of the Republicans for Clinton, because none of the arguments make much sense.

The "Trump can't win" mantra isn't just wrong; it's subversive. Of course he can win. He is running against Hillary Clinton, for goodness' sakes. So why do they say this? Because the never-Trumpers want Trump to lose, because he is to the political class (Republicans and Democrats) the disruptor that Uber is to taxicab drivers.

Second is the complaint by some economists that Trump can't be supported because he is not for free trade. Longtime Washington insider Vin Weber reportedly has said: "The world economic order and the Republican Party" would be "all in shambles" if Trump wins. "I think markets would collapse."

Really? Hillary Clinton flip-flops every day on free trade, so why is it that only Trump would cause a recession? He doesn't get that the Trump movement is a revolt against the world order.

Meanwhile, Trump is calling for the biggest tax cuts and reforms since Reagan. He supports massive regulatory relief and school choice. Trump wants to kill Obamacare. On energy, Trump wants a pro-America drilling policy. Clinton wants to soak the rich, increase the debt, stop energy development, expand entitlements and double down on Obamacare. How is this a difficult choice for a free marketeer?

Third, the Trump haters say we must throw Trump under the bus and concentrate on saving the Senate and House.

This is a foolhardy strategy, because one can't win without the other. As economist Donald Luskin puts it in his historical analysis of presidential races and Senate gains: "It is clear from history that the House and the Senate move in the same party direction as the White House, and with the same magnitude. That means the presidential candidate is like a boat that congressional candidates are riding on. It's really stupid to torpedo that boat."

Finally, there is the view expressed by Bret Stephens, my former colleague at The Wall Street Journal, who wants to "make sure Trump is the biggest loser in presidential history" so that we can "rebuild the conservative movement."

If Obama/Clinton win a third straight presidential race, there won't be a conservative movement left to rebuild. The Republicans will move to the left. Worse, for Obama to effectively win a third term will validate all of the destructive policies of the last eight years. This will be one of the greatest victories for liberal governance of all time.

Do the "never-Trumpers" want to facilitate that? Do they want to hand the left its greatest victory for liberal governance of all time? If they do, they are the unforgivable betrayers of conservative principles.