The Scientific Consensus Has Been Dead-Wrong on Oil 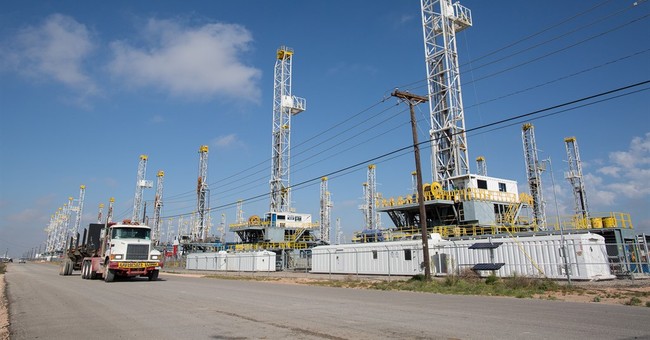 It would be hard to find anyone in all of America who has been more wrong on the American energy story than Barack Obama.

Oil prices have fallen from $105 a barrel in the summer of 2014 to hovering at $35 a barrel today. That's a two-thirds reduction in the price, and the biggest factor is shale oil brought to you by fracking. In many areas of the country gas is now less than $2 a gallon, and it could fall further in the weeks ahead.

The falling price means, of course, an expanded supply. But now listen to Obama, who has lectured the nation on energy as if he were one of the top experts for the last eight years.

In a 2008 speech in Lansing, Michigan, presidential candidate Obama was all doom and gloom about oil, advising: "We cannot sustain a future powered by a fuel that is rapidly disappearing.

Then in 2010 from the Oval Office he solemnly declared: "We're running out of places to drill," and he jeered that the oil and gas industry might want to start pumping for oil near the Washington Monument.

During a 2011 weekly address he referred to oil and gas as "yesterday's" energy sources.

Then during a speech at Georgetown University, he pontificated: "The United States of America cannot afford to bet our long-term prosperity, our long-term security on a resource (oil) that will eventually run out."

By the way, this discredited Malthusian belief that we are running out of oil is still widely believed by many scientists and pundits, too. The United States Department of Energy's National Energy Technology Laboratory stated in a report that "the world is fast approaching the inevitable peaking" of global oil production. Paul Krugman of The New York Times wrote in 2010 that "world commodity prices ... are telling us that we're living in a finite world."

That was when prices were abnormally high. So if high prices tell us we are running out, then obviously low prices must tell us supply is rising.

These stupid predictions of the end of oil have been going on for most of the last century. Just over 100 years ago, the U.S. Bureau of Mines estimated total future production at 6 billion barrels, yet we've produced more than 20times that amount. In 1939 the Department of the Interior predicted U.S. oil supplies would last 13 years. I could go on.

The wonder is that smart people such as Nobel Prize winners Krugman and Obama haven't learned anything from history and instead keep regurgitating these myths about "running out."

The folks at the Institute for Energy Research recently published a study showing three data points: first, the government's best estimate of how much oil we had in America 50 years ago. The second was how much U.S. oil has been drilled out of the ground since then. And the third is how many reserves there are now. Today we have twice as many reserves as we had in 1950. And we have already produced almost 10 times more oil than the government told us we had back then.

Technology and innovation account for the constant upping the amount of "finite" oil we can produce. We discover new sources of oil much faster than we deplete the known amount of reserves, and so, for all practical purposes, oil and natural gas supplies are nearly inexhaustible. Fracking is the latest game-changer and the access it gives us to shale oil and gas resources has virtually doubled over night. And this technology boom in drilling is just getting started.

My point is how absurd it is for Americans to blindly trust any "scientific consensus" on any of these natural resource or environmental issues. The credibility of the alarmists is just shot. In 1980, hundreds of the top scientists in the United States issued a report called The Global 2000 Report to the President, which was a primal scream that in every way life on earth would be worse by 2000 because the world would run out of oil, gas, food, farmland and so on.

My mentor Julian Simon and Herman Kahn challenged this conventional wisdom. Today they would be disparaged as "deniers." Yet on ever score these iconoclasts were right and the green scientific consensus was wrong.

Lately, even Obama doesn't make the ridiculous claim that we have to use green energy because we are running out of oil.

Instead he now says we should keep our super-abundance of oil "in the ground," even as he tries take credit for the low prices.

In reality, if we do what Obama wants, gas at the pump and electricity are going to be more expensive. If you don't like $1.89 gasoline at the pump, you're probably a big fan of the Obama energy/climate change agenda.

Hopefully, the neo-Malthusians like Obama will stop resorting to the century-long false fear that we are running our of oil as an excuse for using much more expensive and much less efficient "green energy."

Many years ago I was quoted in The New York Times as making this point about our infinite oil supply, and a high school science teacher wrote me and huffed: "Even my 14-year-olds know that oil is finite." This teacher is probably now a top science adviser to Obama.