Crowded Field Puts The 'Party' Back In 'GOP' 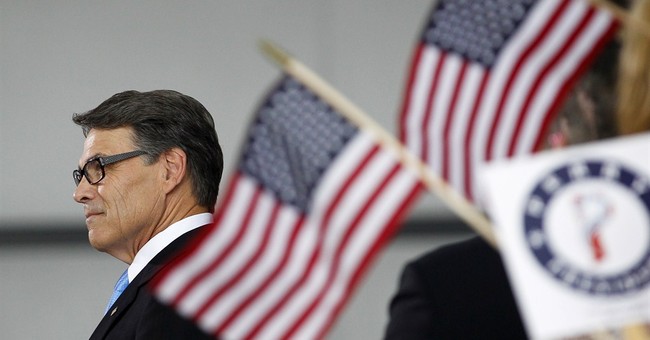 Rick Perry’s entrance into the 2016 GOP Presidential Sweepstakes brings the total number of Republicans running to 647, I believe. While many are lamenting the size of the field, I welcome the hot messiness of it all.

For most of its recent history, the Republican modus operandi when it came to presidential elections involved an unspoken order of succession that rewarded a guy whose biggest claim to fame was that he was unable to secure the party’s nomination in the past, but had nothing else going on so he could hang around for a while. As a formula for success, it’s not much different from getting fat eating nothing but whipped cream and Oreos, then trying to drop thirty pounds eating nothing but whipped cream and Oreos. It is also a big part of why a Republican candidate has only managed to win the popular vote for the presidency once in the last twenty-six years.

After using this approach in 2012 to lose an election that historical indicators said they should have won, the GOP conducted an examination of what happened that, perennially message-challenged, they called an “autopsy” (“We’re now a corpse-vote for us!”). This autopsy spoke of needing better minority outreach, get out the vote efforts, pretty much everything but a change in brands of candidates’ hair gel, all of which avoided coming to the one conclusion they obviously should have: find nominees who aren’t awful.

One of Barack Obama’s signature achievements was getting a whole bunch of Americans to vote for Republicans in the midterm elections that happened on his watch. He was actually better at getting out the Republican vote than the RNC was in 2010 and 2014. So, the votes are out there somewhere, we just need to make sure they aren’t all drunk and staying home to wonder what Costa Rica is like on Election Day next year.

This mosh pit of a primary should be just the thing to do that.

The GOP autopsy wanted diversity and it got it just a few short years later, in the candidate pool if not in the electorate (which remains to be seen). There are two forty-something Cuban-Americans (Double hyphenates, people!), the saner Paul, and a female former CEO to challenge the favorite of the harumph wing of the GOP, Little Jeb Fauntleroy. Heck, the Republican party has gotten so big tent this time around that it’s letting two different white Southern Democrats run.

Even Rick Santorum’s sweaters have more ethnic flavor than the Democrats who have declared thus far.

In fact, when the GOP field is compared with the Crypt Keepers on other side, the stark juxtaposition makes it difficult for the Democrats to claim they are the party of youth and diversity.

If Republican voters (that includes you people who love to reflexively bark “I’M A REGISTERED INDEPENDENT!” during every political discussion, even though you’ve voted GOP for twenty years) can get over waiting for a perfect candidate,or “the next Reagan,” they will find a lot to like in several of this year’s crop.

The Democrats, meanwhile, are saddled with a front-runner that nobody likes.

So, what if the television debate situation will be somewhat unmanageable? As anyone who isn’t concussed (apologies, Mrs. Bill) knows, the problem with GOP debates isn’t the number of debates or candidates, it’s the moderators who ask questions that are important only to MSNBC’s seventeen viewers. Even “friendly” media isn’t all that friendly. Fox News is partnered with Facebook for a debate it’s hosting. Facebook just partnered with the New York Times. With friends like those...

This big, messy field provides the perfect opportunity for the new era Republicans to marginalize the tired voices who still work from desks that are covered in paper and Karl Rove bobble heads. Yes, the entire field will be asked by the press about anything stupid one of them says, and the larger group means there is a greater likelihood that something stupid will get said. The press will always treat Republicans that way, however, so maybe it’s time to stop trying to avoid that and learn how to handle it in a way that discourages them from trying it too often. Enough practice having to answer for Huckabee’s shower fantasies, and maybe the eventual candidate won’t let Candy Crowley win it for the Democrats this time. Let the long shots talk all they want, they’re still going to be long shots, no matter how badly John McCain wants to be President Lindsey Graham’s First Lady. They’re providing much needed media practice for the frontrunners.

If you’re into near-death experiences, this is an exciting time for the GOP. It’ll either find a dynamic nominee who will make Hillary Clinton look all the more old and tired in the general election, or it will go the way of the Whigs. This huge crowd will act as a media crucible to toughen up the nominee. The field as it stands today has several candidates who can emerge and prevail in November next year, no matter what the establishment and the press tell you.

So relax, enjoy the party, and take extra comfort from the fact that the Republicans’ Number One Democrat Destroyer hasn’t even entered the fray yet.