State Rep. Jake Hoffman
|
Posted: Dec 19, 2019 2:30 PM
Share   Tweet
The opinions expressed by columnists are their own and do not necessarily represent the views of Townhall.com. 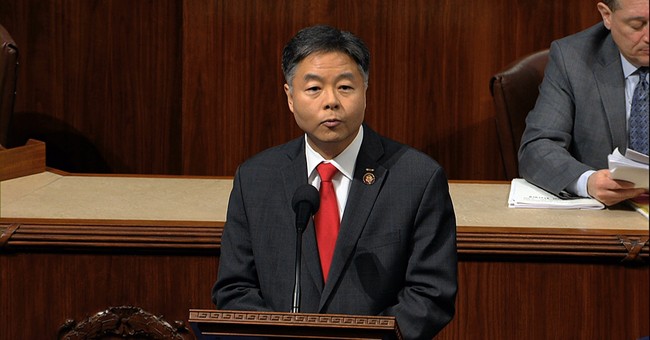 Americans from all walks of life and corners of the political spectrum should take only one thing away from the partisan impeachment we just witnessed in the Democrat-controlled House: Democrats hate President Trump and they hate you for electing him.

Don’t believe me?  Consider the words of Democrat congressman Ted Lieu on the floor of the U.S. House during the impeachment proceedings; “Whether Donald Trump leaves [office] in one month, one year or five years, this impeachment is permanent, it will follow him around for the rest of his life and history books will record it.”

You see, impeachment has never been about the President violating any laws or committing high crimes and misdemeanors.  In fact, House Democrats, led by the likes of Nancy Pelosi, Adam Schiff, Jerry Nadler, Tom O’Halleran and others, proceeded with impeachment in spite of clear and convincing evidence directly contradictory of doing so and with complete disregard for the rule of law.

Impeachment has always been about the Democrats’ pure and visceral hatred for the man who exposed the fraud of the swamp and those who gleefully swim in it—the corrupt, career politicians, the self-serving bureaucrats, the thousands of soulless lobbyists and the consulting class racketeers.  It has always been about the politics of personal destruction and their need to destroy him politically, professionally and personally to teach you, the American voters, a lesson, that you are not in charge—they are.

Moreover, despite Democrats’ best attempts to spin impeachment not as something politically motivated, but one necessitated by the “facts,” their true intents have been clear from the start. Efforts to impeach President Trump began a mere 19 minutes after he swore his oath of office and officially assumed the presidency with the Washington Post publishing a piece under the headline The Campaign To Impeach President Trump Has Begun.  And the hyper partisan effort to impeach him didn’t stop there.

Impeachment has always been political. It has always been about power hungry Democrats exploiting their positions of public trust to investigate their political enemy and unfairly influence the outcome of the 2020 election. Congressman Andy Biggs summed it up perfectly, “Democrats have put America through a 3-year nightmare as they’ve spared no effort to impeach and remove President Trump from office.”

Democrats may be consumed with hatred, but they aren’t politically inept.  To them, it is imperative that they rig the 2020 election in their favor in order to stand even a fighting chance of reclaiming the White House, because on merit alone they will lose in a landslide.  They know that the President is winning and winning big for every day, hardworking Americans.  Consider the recent November jobs report that yielded yet another consecutive month of winning for the American people, adding 266,000 new jobs—54,000 of which were in manufacturing—a 50-year low unemployment rate of 3.5% and a staggering 3.1% year over year growth in Americans’ wages.  The Democrats know that President Trump’s unabashed America first platform works and that Americans of all political persuasions are benefiting, which for them is a political death nail.

The victories President Trump has accumulated and his unrivaled focus on keeping his campaign promises make him an existential threat to the Democrats and the establishment in Washington D.C.  It has exposed the self-serving, hypocritical double standards of those who have exploited the American people to enrich themselves, as well as, precisely how little career politicians have done over the years to improve the lives of the people who elected them.  President Trump was one hundred percent correct that by proceeding with impeachment “[Democrats] are declaring open war on American democracy.”

Thankfully President Trump is a fighter and the Democrats’ efforts to defame and destroy him have only furthered his resolve to double down on the American people.  He’s placing all his chips on us, and in 2020, I expect the American people to return that trust by going all-in on four more years. Democrats’ impeachment be damned.