Personal Retirement Accounts Will Help in Next Crisis

Star Parker
|
Posted: May 06, 2020 12:01 AM
Share   Tweet
The opinions expressed by columnists are their own and do not necessarily represent the views of Townhall.com. 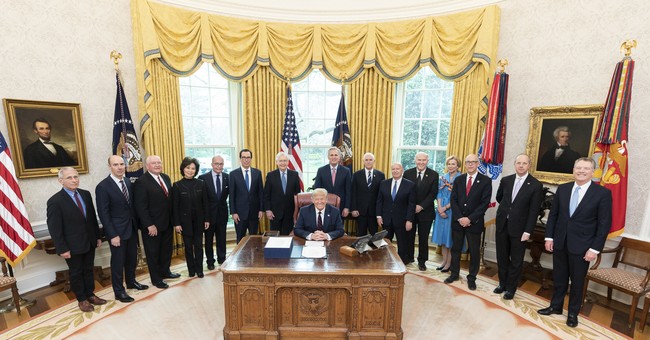 Congress passed and President Donald Trump signed into law the CARES Act to provide emergency measures to help us get through the economic crisis caused by the COVID-19 shutdown.

A crucial objective was to provide funds to the many individuals who suddenly found themselves cash-strapped and unable to pay bills because, through no fault of their own, they were out of work.

Two major provisions are $1,200 cash payments for individuals, and relaxing rules to allow withdrawal from or loans against IRAs, 401(k)s and other defined benefit retirement plans without penalties or tax consequences.

The cash payments received most of the attention. But the provisions for getting cash from retirement plans were a highly desirable addition. Ideally, it's best to be able to manage through a crisis with your own resources rather than government money.

If there is anything foreseen, it is that the unforeseen will always be part of our lives. We all should manage our personal affairs with this in mind. Living day to day, week to week, paycheck to paycheck is not how anyone should be managing their life.

You might say: "I'm working two jobs. I spend practically nothing on entertainment, and I still barely make it to the end of the month."

And here is where the right government policy can help you be freer to manage your own life.

I've been writing for years that Americans should be allowed to invest their payroll tax in their own personal retirement account. The payroll tax is what's used now to finance Social Security.

Many still think that Social Security is some kind of retirement investment plan. No, it's just another government tax and spend program.

Every year, retirees get Social Security payments. The funds come from the payroll tax that practically every working American pays.

It seemed like such a good idea when then-President Franklin D. Roosevelt signed it into law in 1935. Every working American would pay a small tax, and those funds would immediately go out and provide retirement income to retirees.

But back then, there were more than 40 Americans working for every retiree.

Today, our world is much different. Fewer are getting married. Fewer are having children. And the miracles of modern medicine give us a much longer life.

So instead of 40 working for every retiree, today there are around three.

According to the annual report issued by the Trustees of the Social Security Administration, in 2035, just 15 years from now, Social Security will only have funds to cover 76% of the benefits promised to retirees.

Either taxes must be raised, or benefits must be cut. Who wants either?

Doing so would make a bad deal even worse. According to a study commissioned by the Committee to Unleash Prosperity, the average annual return of Social Security over the last 40 years was about 1%. Over the same period, the stock market returned more than 6% annually.

According to the Federal Reserve, only 43.6% of working households earning $40,000 or less annually say they have any retirement savings. This means the only retirement provision the rest have is the payroll tax being taken out of their paycheck designated for Social Security.

Social Security Trustees are now telling those who are 52 years old or younger and expect to retire at 67 that they can expect just 76% of their benefits.

Now that President Trump is talking about the payroll tax as a policy tool to deal with this crisis, we should act.

Let's allow working Americans, or at least those earning $40,000 or less, to divert their payroll tax into their own retirement account.

They will get independence and have far more wealth when they retire.

And when the unforeseen is upon us again, when there is another crisis, they won't have to pray that the government will send them money. They will have their own savings, which they can tap into to get themselves through the crisis.

Star Parker is president of the Center for Urban Renewal and Education and author of the new book "Necessary Noise: How Donald Trump Inflames the Culture War and Why This is Good News for America."