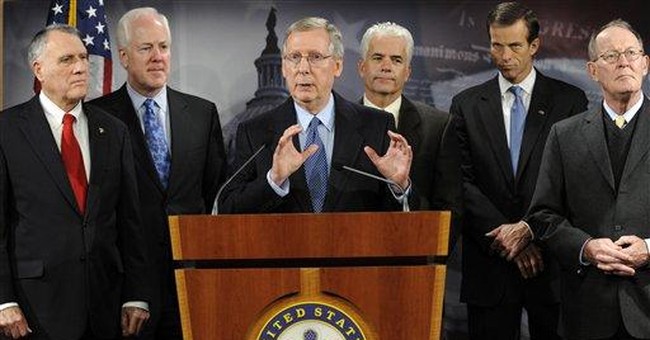 The first Gallup poll out on President-elect Barack Obama's stimulus plan shows a divided country, with Republicans in a distinct minority and in opposition.

Democrats support the $750-billion plan (67 percent to 19 percent) as do Independents (54 percent to 37 percent). But Republicans stand in opposition (56 percent to 34 percent).

But taking a look at Republican Party reality inside the Washington beltway, we see a rudderless ship, out of touch with the grass roots of its own party.

Our Republican president -- yes, he is still president -- has taken himself out of the discussion. And on Capitol Hill, the Republican leadership appears quite comfortable with the initiative in principle, expressing reservations only in regard to its form and content.

Pretty tepid stuff, given the severity of the times and the underlying ideological implications of where Obama and his Democratic cohorts in Congress plan to take us.

Where is the Republican leader who is going to challenge the basic premise upon which our president-elect is rationalizing this massive new government intrusion into our economy and our lives?

Mr. Obama said it quite clearly. "...at this particular moment only government can provide the short-term boost necessary to lift us from a recession this deep and severe. Only government can break the cycle that is crippling our economy..."

The fact that there does not appear to be a single Republican leader who is capable or ready to challenge the assertion that "only government" can put our sputtering economy back on track shows we need a rebirth of the Republican Party. And that this rebirth must come from the grass roots.

Those 56 percent of Republicans that said "no" in this latest Gallup poll are looking for a leader. And that leader certainly does not seem to be in Washington.

The Wall Street Journal tallies up that when all is said and done, with the latest round of bailouts and the spending that Obama is putting on the table, the federal government will be sucking out 28 cents of every dollar produced in the American economy. The word "unprecedented" should be on our minds here.

Since World War II, the federal government take has averaged about 20 cents on the dollar. Now, take the 28 cents and add in state and local government spending and we arrive at about 40 cents of every dollar we produce that will be going to government.

Is this really the formula for restoring American greatness and prosperity?

Despite Senator McConnell's stated reservations about this spending tsunami becoming "systematic" and Obama himself saying "I'm not out to increase the size of government long-term," it's impossible to take these disclaimers seriously.

History shows that every expansion of government stays permanent.

As Harvard Economist Greg Mankiw points out, the massive expansion of government during those years was supposedly to deal with temporary problems -- the depression and then the onset of World War II.

But there was never a subsequent cut back. The expansion just continued to where we are today.

As the political class in Washington transforms our once great, prosperous, and free country into a lumbering socialist mediocrity, a voice of dissent is needed.

In this sense, I like what Ken Blackwell is proposing in his run for RNC Chairman. Blackwell is calling for a "shareholder revolt" within the Republican Party and to move power, money, and influence to State organizations.

We do need a shareholder revolt in the Republican Party followed by one in the country as a whole.