Stacy Washington
|
Posted: Feb 26, 2020 10:15 AM
Share   Tweet
The opinions expressed by columnists are their own and do not necessarily represent the views of Townhall.com. 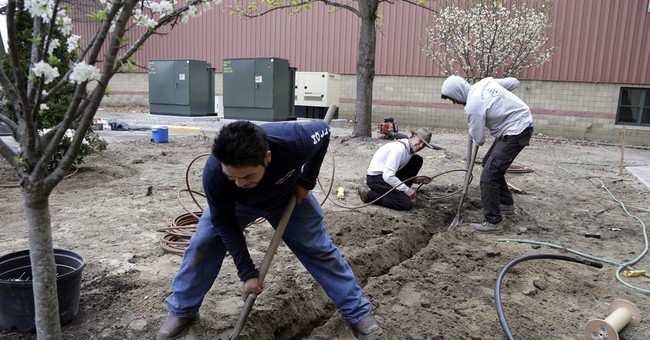 In a letter addressed to acting DHS Secretary Chad Wolf, 123 Republicans and 66 Democrats urged the Trump administration to issue an additional 30,000 guest-worker visas to companies in manual-labor industries such as construction, landscaping, and tourism.

Lawmakers claim these firms can't find enough American workers -- and that without imported laborers, the companies "will be forced to scale back operations" or "close operations completely." That's simply false.

Plenty of Americans would fill those jobs if employers didn’t have access to lower-wage foreign guest workers. Although the economy has improved in recent years, 5.9 million Americans remain unemployed. Even Fed Chairman Jay Powell recently admitted "the labor market is not as tight as it would appear."

After decades, blue-collar workers are beginning to see their wages rise, if slowly. Importing even more foreign laborers would deny job opportunities to these Americans and enable corporations to keep wages low. It's time to reduce -- not increase -- the number of guest-worker visas.

The visas in question are "H-2Bs," which are available to businesses looking for temporary, non-agricultural laborers. Almost 70 percent of H-2B visas go to employers in just five industries: meatpacking, construction, housekeeping, forestry, and carnivals.

Generally, Congress caps the annual allotment of H-2B visas at 66,000. But in the past three years, lawmakers have asked the Trump administration to raise that limit. Last year, the Department of Homeland Security granted 96,000 H-2B visas to foreign job seekers.

That's simply not true. Many Americans, especially those with limited skills and educations, want jobs -- even seasonal, physically taxing jobs. But they need positions that pay a living wage. Many H-2B employers don't.

Those employers specifically use the H-2B program as a source of cheap labor. Visa holders earned less than the national average in 21 of the top 25 H-2B-reliant industries in 2018.  For instance, foreigners laboring as meat and fish packers earned $10.05 per hour, compared to a national average of $12.71.

In recent years, as the number of guest workers admitted into the country has grown, less-educated Americans have seen wages stagnate and even fall. Between 1979 and 2018, median wages for workers with a high-school diploma or less fell by 12.3 percent in real terms.

If the government stopped supplying companies with a ready supply of cheap foreign labor, those employers would be forced to raise pay -- and Americans would apply for the positions.

For proof that there's no labor shortage, just consider the Census Bureau's ongoing hiring spree. This year, the agency will hire roughly 500,000 temporary, low-skilled workers for its once-in-a-decade population survey. The Bureau expects little difficulty in completing the census -- in large part because its wages start at or above $15 per hour in most states.

The H-2B program hurts foreigners, too. In some cases, H-2B employment amounts to de facto indentured servitude. Visa holders are tethered to a single employer, no matter what abuses and adverse working conditions they face.

Fortunately, not every member of Congress has sold out to Big Business lobbyists.

Recently, a bipartisan cluster of lawmakers -- led by Senators Dianne Feinstein (D-CA) and Chuck Grassley (R-IA) -- called for H-2B reforms. In their own letter submitted to Acting Secretary Wolf, they denounced the program for allowing "unscrupulous employers to hire H-2B workers instead of American workers and create poor working conditions for immigrant workers and American workers alike."

They're absolutely right. When business executives whine about a "labor shortage," what they really mean is that too few Americans are willing to work hard, dirty jobs for starvation wages.

It's time for Congress and the administration to side with vulnerable Americans, rather than the corporations that demand a never-ending supply of cheap, pliant labor. Curtailing the H-2B program would finally force businesses to raise wages and improve working conditions.

Stacy Washington is a decorated Air Force Veteran, an Emmy nominated TV personality, and the host of the nationally syndicated radio program "Stacy on the Right."