Miss Me Yet? Examining the Trump Administration on Immigration by the Numbers

Spencer Raley
|
Posted: Jul 28, 2021 12:01 AM
Share   Tweet
The opinions expressed by columnists are their own and do not necessarily represent the views of Townhall.com. 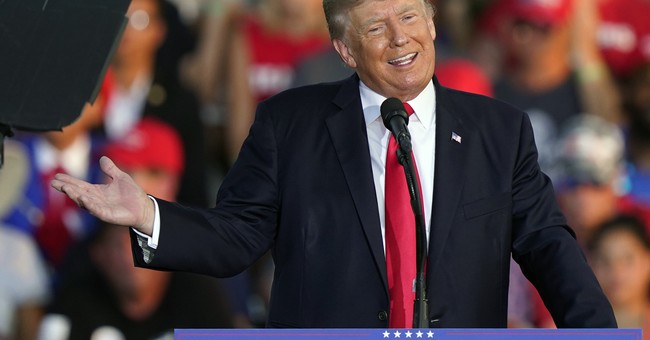 From that iconic moment when he rode down the escalator at Trump Tower through the end of his one term as president, few deny that Donald Trump’s driving legacy as Commander-in-Chief was immigration reform. His promise to combat illegal immigration and “build the wall” rallied Americans and upset the balance of power centered around the political establishment in Washington.

So, now that he is no longer president, the question remains: “Did President Trump fulfill his promise to enact true immigration reform?” To investigate that question, we must look at the data. However, immigration is one of those complex issues where the vast amount of available data often just makes things more confusing.

In order to help simplify this task, researchers at the Federation for American Immigration Reform (FAIR) compiled the most important immigration data from the Trump administration into one document, and shed light on what it actually means.

Overall, the Trump administration performed quite well in regards to immigration, especially when compared to the Obama administration or the ongoing and unprecedented immigration crisis created by the Biden administration. Unfortunately, there were also some areas where the administration could have done more to represent the interests of American citizens. Let’s investigate a few of these categories further.

Apprehensions at the southern border (now called “encounters” by the Biden administration), along with removals/deportations, are perhaps the strongest indicators of whether an administration has illegal migration under control.

After a couple of years where border apprehensions remained at half a million or less, the Trump administration experienced a border crisis in 2019. This crisis was largely caused by waves of illegal aliens who discovered that they could file bogus asylum claims, yet still be released into the country. This resulted in roughly 978,000 border apprehensions in Fiscal Year (FY) 2019. The Trump administration solved this problem by implementing the Migration Protection Protocols (MPP), which required that asylum applicants remain in Mexico while their cases were processed. Since the vast majority of asylum applications during this time were found to have no merit, this discouraged individuals from making the long and often dangerous trek to the United States. As a result, apprehension numbers plunged drastically once these protocols were put in place. This was a major test for the Trump administration, and they passed it by enacting sensible and effective measures.

However, despite the crackdown on asylum fraud, the administration still managed to grant 46,508 asylum requests in FY 2019. This was the highest number of requests granted in a single year during the 21st century, countering false claims by President Joe Biden (who cancelled MPP soon after taking office) that former President Trump “dismantled” the American asylum program.

In addition to strengthening border enforcement, Trump removed the handcuffs from interior law enforcement officers by repealing the ridiculous “deportation priorities” implemented by President Obama. These “priorities” prevented Immigration and Customs Enforcement (ICE) from deporting most illegal aliens. Thanks to this change, ICE removals in FY 2019 were up nearly 60 percent compared to the final year of the Obama administration. Even in FY 2020, when ICE efforts were severely limited by the COVID-19 pandemic, the agency deported more than 185,000 immigration lawbreakers.

Despite these much-needed improvements, some glaring problems still remained at the end of the Trump administration.

First, the illegal immigrant population in the United States grew significantly, from 12.5 million when he took office, to 14.5 million in his final year. This was largely a result of the administration failing to implement common-sense measures such as mandatory E-Verify and worksite enforcement that would prevent illegal aliens from taking jobs that they were not legally entitled to hold. Since the pre-COVID economy in the United States was experiencing record levels of success, the failure to implement these measures allowed for the millions of illegal aliens who did successfully enter the country to comfortably gain employment without their employers facing any real prospect of prosecution.

Also, the Trump administration catered to the wishes of large corporations at times by increasing the number of temporary work visas. Throughout his years as President, with the exception of FY 2020 (again, due to COVID-19 restrictions), President Trump increased the total number of H-1B, H-2A, and H-2B visas. Inexplicably, the administration even imported more H-2A workers in FY 2020 than FY 2019, despite tens of millions of Americans looking for work. Corporations often use these temporary labor visas as an avenue to fire American citizens in favor of cheap, foreign labor. The Trump administration had multiple opportunities to, at a minimum, significantly limit this immoral practice but failed to do so.

While former President Trump may not have done all that he could to truly reform our immigration laws, his leadership on the issue is sorely missed right now. President Biden committed his first six months in office to undoing essentially all of the progress made by President Trump, and it shows. With several months still to go in FY 2021, apprehensions at the southern border have already far exceeded not only any year during the Trump administration, but any year during the entire 21st century.

The Biden administration has lost control of the situation to the extent that they are now simply busing and flying tens of thousands of illegal aliens into the interior of the country from the border, often without even issuing them a notice to appear in court. At the same time his administration, along with Democrats in Congress, are making this self-inflicted crisis even worse by trying to amnesty more than 10 million illegal aliens. It’s high time President Biden admit that his predecessor made many correct moves regarding immigration, and reinstate the common-sense measures implemented by President Trump that placed the interests of American citizens first.