Sheriff David Clarke, Ret.
|
Posted: Dec 21, 2019 12:01 AM
Share   Tweet
The opinions expressed by columnists are their own and do not necessarily represent the views of Townhall.com. 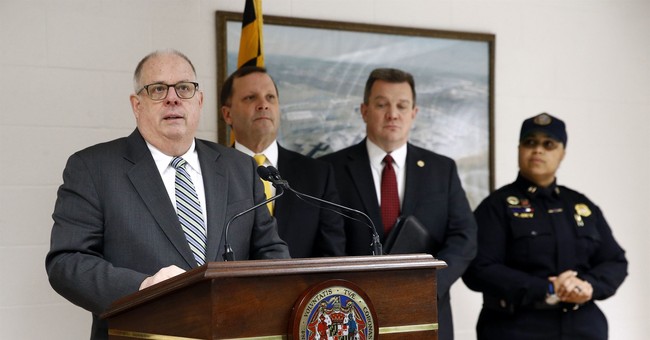 Maryland Governor Larry Hogan is smart on crime as he unveiled a real crime reduction plan to help violence-plagued Baltimore City, an area whose political class contains nothing but elected Democrats at all levels.

Hogan gets it. There is not much that the government can do to fix the dysfunctional black underclass culture that causes most of the violence in Baltimore. Pouring money into midnight basketball, after school programs, second chance crime reduction programs will do absolutely nothing to fix the urban pathologies of ineffective parenting, absent fathers, and flawed lifestyle choices like dropping out of school, joining gangs, illegal gun possession, fathering kids in their early to mid-teens along with drug and alcohol abuse.

The Democrat liberal approach that has been tried over and over again has failed miserably. Simply pouring money into these failed soft behavioral modification programs has only exasperated the problem. No amount of money will get people to change their dysfunctional behavior. We can’t make parents, for example, be good parents, but we can punish them for the responsibility of not being better at raising their kids and we can punish their offspring for their violent anti-social behavior.

It is not the government’s or taxpayer’s responsibility to step in and raise children abandoned by their mothers and fathers. It is, however, the responsibility for the government to use tax dollars to protect law-abiding people from being victimized by ineffective parenting and separate them from society for the longest time allowable by law. Then bleeding heart liberals turned what was proven strategies to control crime into something racist. They turned safe streets, schools, and communities into a political movement by claiming that this was a thinly veiled attempt by tough on crime advocates to systematically lock up black males. Liberals screamed about a mass incarceration campaign and went away from the use of jails and prisons as crime control tools. They indoctrinated criminal justice practitioners including prosecutors, police and probation and parole agents about some inane idea about inherent bias theory. That led to discouraging prosecutors from issuing charges against drug dealers and gun-toting repeat offenders. They urged judges away from high bail and lengthy sentences even though these are some of the tactics at the heart of the great crime declines of the 1980s to the mid-2000s. There is no argument about that. It has been proven over and over by criminologists and economists on either side of what works best argument, programming or incarceration.

So what happened in places like Baltimore, New York, Chicago, Milwaukee, Los Angeles, Washington DC and any other urban center run by the Democrat political class? They went away from what worked and went on a crusade of social engineering using the American ghetto as their social engineering laboratory and poor and minority people as lab rats. The new phrase became ‘best practices”. We heard concepts like second chances for unwanted criminal behavior even serious infractions. Urban centers all across the country took their foot off the gas of what was working in favor of soft programming they called “investments”. It has been a disaster and a nightmare for residents of Baltimore that has become the murder capital of the United States.

So in steps Larry Hogan, a Republican, to stop the carnage. Baltimore, like Chicago’s Democrat officials, is at a loss to stop the senseless bloodshed on the streets of their respective cities. Hogan along with his plan will undoubtedly face harsh criticism from a chorus of the leftist media editorial boards. It’s been labeled as racist. So far Baltimore Baltimore Mayor Jack Young has welcomed the help but doesn’t count on that lasting long. As soon as liberals get to him, he will criticize the plan.

What Hogan realizes and as I have long pointed out is that job one is to get control of the city streets. Criminals are operating in plain sight and with no fear of an embattled police department still reeling from their political all activist State’s Attorney Marilyn Mosby who is more determined to get indictments on police officers for doing their job than on prosecuting career criminals. Hogan pointed out that 85% of homicide suspects had a prior criminal record and had been arrested an average of seven times. So much for second chances. Additionally, over 50% have been arrested for violent offenses. So much for giving second chances for low-level offenders and 40% had previously been arrested for a crime committed with a gun.  The plan is correctly heavy on providing millions for resources like additional officers for street patrols, prosecutors, judges, probation and parole agents all focused on going after career criminals. The key will be changing the culture in the prosecutor’s office to actually bring criminal charges, keeping them in jail with high bail while awaiting trial and getting lenient judges to not accept watered-down prosecutions in exchange for plea bargains and sentencing them to long periods of incarceration.

The strongest part of Gov Hogan’s plan is a return to the federal gun crime reduction plan called Project Exile. This plan originally started in Virginia and led to record reductions in violent crime. It sent all offenders who use a gun in the commission of a crime for federal charging. A perpetrator faces a longer sentence in the federal system and more likely sentenced to a longer period of incarceration in federal prison. This will get the attention of the criminal element who currently do not fear prosecution at the state level.

Memo to Chicago Mayor Lori Lightfoot: Give Governor Hogan a call and have him send you his crime and violence reduction plan and implement it immediately. There is no copyright on it.