Sheriff David Clarke, Ret.
|
Posted: Sep 03, 2019 12:30 PM
Share   Tweet
The opinions expressed by columnists are their own and do not necessarily represent the views of Townhall.com. 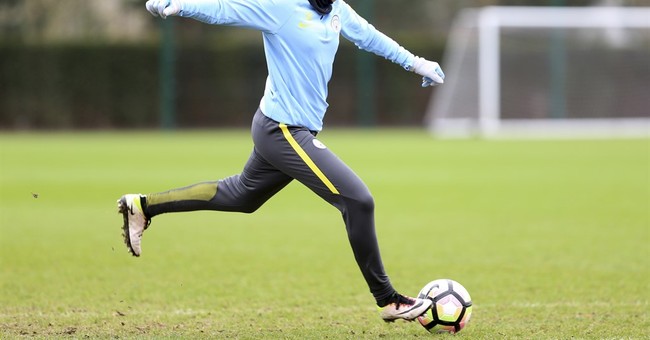 With the National Football League set to begin its 100th season, let’s discuss the latest attempt by the PC folks who think the NFL would be the appropriate platform to break a gender barrier.

I shook my head as I watched the talking heads on that four-letter sports news program nodding in agreement in their echo chambers about how now is the time for a woman to be on an NFL roster, preferably as a kicker.

Nowadays, it is impossible to avoid politics even when talking about or watching sports. How sad. Women playing in the NFL is yet another PR stunt where nobody is willing to speak the truth. Seriously, who is clamoring to see women play in the NFL? Not me.

The NFL has allowed itself in the past to be used for social engineering purposes. They've made players wear pink shoes and towels during October for breast cancer month, and in 2014 Michael Sam was drafted as the first openly gay player. He wasn’t that good, but a spectacle was made of him. He bounced around a couple of teams and was soon out of the league--not because of his sexual preference--but because he was never good enough to begin with. However, Sam's presence allowed the NFL to come off as woke. Several players spoke out as being uncomfortable in the locker room with him. NBC pre-game host and former Super Bowl-winning coach Tony Dungy said he could see it being a distraction. Anyone stating his opinion was made to attend sensitivity training by the league. I call it brainwashing school. My point is that people in the league know better than to state an opposing opinion on PC issues. Everyone is on edge over being seen as insensitive or bias.

Not one commentator on that four-letter sports news show dared to state the truth about women playing in the NFL. They know if they did it might land them in trouble with the network, so they all talked about this nonsense with forced gleeful enthusiasm. I was hoping even just one had the courage to say women playing in the NFL is not a good idea--that, in fact, it is a terrible idea even at the kicking position.

When I first saw the reports about women’s soccer player Carli Lloyd nailing a 55-yard field goal at the Philadelphia Eagles camp I thought, wow. That’s not easy even for many male kickers. My curiosity forced me to look deeper into this. But for the fact that she played on the World Cup-winning women’s team, she would not have been invited to visit the Eagles camp. Many other USWST players are making the rounds capitalizing on their celebrity. Nothing wrong with that but let’s have an HONEST analysis of her kick.

First, Carli Lloyd lined up seven yards behind the ball and took a running start to generate enough leg strength to kick the ball. She’s a soccer player so we know she knows how to strike a ball. Second, no rushers were coming full speed and jumping up trying to block her kick like they would in an NFL game. And she had no pads on and was not wearing a helmet. An NFL kicker in a live game gets two, count them, two steps before having to kick the ball, not seven with a running start or it will get blocked back in the kicker’s face. Oh, and another question. Once it gets blocked, then what?

Los Angeles Charger star wide receiver Keenan Allen put it succinctly when he tweeted about Carli Lloyd playing professional football. The tweet said, “sound sweet til somebody block the kick and all of a sudden she’s on defense.” He continued by writing that, “it would be like the stampede scene in the lion king movie.” He followed it with a laughing emoji. I don’t find it humorous about the thought of Carli Lloyd or any woman being on a football field with guys running at full speed trying to knock the hell out of each other in what is a collision sport, but Allen raises the obvious. No one on that four-letter station did.

Then I heard another sports talk show host suggest that the NFL could make some special dispensations for women to play like players not being allowed to block or tackle Lloyd. In other words, he suggests making two sets of rules — one for men and another for women. I thought the left obliterated that idea with forcing men and women to use the same bathrooms. This is where I draw the line. In a country where liberals insist we treat everybody the same, there should be no special set of rules for Lloyd or any other woman who thinks she could play in the National Football League.

Where does this nonsense end? Allowing women to compete with men in UCF fighting? If the National Basketball Association wants to conduct a social engineering experiment by letting a woman try to make a roster with the men, that might have some merit although even professional basketball has become more of a contact sport. Here again, however, I’ll ask, why? Is this so we can feel good about ourselves? There are enough areas where crossing the gender barrier needs to happen, but the NFL?

Why is everybody afraid to tell the truth? Women playing in the NFL is silly. Stop it already.

Sheriff David Clarke Jr. is former Sheriff of Milwaukee Co, Wisconsin, President of AmericasSheriff LLC, advisory Board member for We Build the Wall Inc, author of the book Cop Under Fire: Beyond Hashtags of Race Crime and Politics for a Better America. To learn more visit www.americassheriff.com