Sheriff David Clarke, Ret.
|
Posted: Nov 07, 2018 12:53 PM
Share   Tweet
The opinions expressed by columnists are their own and do not necessarily represent the views of Townhall.com. 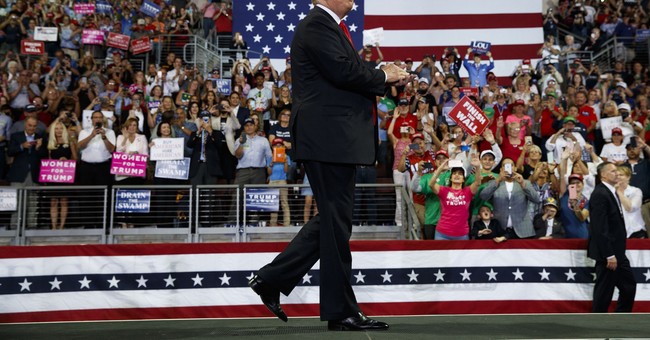 The traditional behavior after a political party experiences defeat in an election is to sift through the rubble trying to determine what happened, why and who is to blame. Some will try to find a rainbow in it, some will see the defeat as fatal. Reality is somewhere in between.

I won’t try to spin what happened to the GOP in losing the House of Representatives.  While not fatal, there are very few positives in losing an election. Saying it could have been worse is an excuse. Here is one for you. It wasn’t the total train wreck it could have been and at least the GOP held onto the US Senate. The fact remains however, that you don’t win by losing in politics. There is no net positive in having the House in the hands of the Democrats. Finding solace that there was no blue wave misses the point. Being a former elected official myself as sheriff, I always had the mindset that I only needed one vote over 50% to win the election. You get no style points either way in election outcomes.

Losing the House was not shocking. Not to me, anyway. Since Donald Trump won the presidency in 2016, the GOP had lost 40 state and federal elections including many seats long held by Republicans like in Pennsylvania’s 18th congressional district and the Alabama US Senate seat then held by current Attorney General Jeff Sessions. There seemed to be no sense of urgency about the trend toward Democrats. Instead of being seen as a harbinger of things to come, it was ignored. Was it hubris or complacency? I’ll let you decide.

President Trump held up his end of the bargain for the GOP. He did everything he could. He ran a save-the-Senate-and-increase-the-margin strategy and he succeeded increasing the GOP Senate majority by 4 seats. If the results of Senate races in Arizona and Montana hold form, eight of the nine Senate candidates in hotly contested races along with the Governors of Florida and Georgia who Trump campaigned for, won. What more could you ask? There were too many House races for him to get too heavily involved with and still be effective. He had to stay narrowly focused here. GOP candidates running for Congress had to win their own races. They had to have a clear message, raise enough money to be competitive and have an effective get-out-the-vote strategy. The Republican National Committee has to help win House seats. The Democrats went all-in and spent heavily to win House races. It was their No. 1 objective. Democrats knew winning the Senate was unlikely. Their ground game continues to be superior to that of the GOP.

Everything that President Trump has been trying to accomplish legislatively has been made that much more difficult with a Democrat controlled House. The missed opportunities by the GOP controlled Congress are a total repeal of Obamacare, making the tax cuts permanent, concealed carry reciprocity and border wall funding as part of the president’s 4-pillar recommendation to begin fixing immigration. These are just a few of the things that will not be taken up under a House of Representatives controlled by Democrats.

Here are some other observations about the 2018 midterm election results.  Conventional wisdom says that the party in power after a presidential year win in the previous cycle, loses congressional seats in the midterms. What gets little attention is as to why. Saying the electorate wants a check on presidential power is the most repeated low hanging fruit reason. In fact the electorate has little patience for political gridlock. When you drill down into these previous midterms individually however, there are other explanations that deserve further discussion.

In 2018, the GOP was facing the fact that nearly 40 of their incumbent office holders did not seek re-election which is the most for the GOP since 1930. The power of incumbency in elections cannot be overstated. The total number of incumbents not seeking re-election as Democrats was about 17. The total number of House departures, 57 in 2018, is the most since 1992 when 65 people between the two political parties voluntarily decided not to seek re-election. The breakdown by party that year was 41 Democrats and 21 Republicans not seeking re-election. The Democrats still held on to the House that year. The following midterm House control shifted to the GOP but recall that the GOP had a vision they called the Contract with America giving the electorate a reason to seek change.

The GOP in 2018 had no plan to deal with the 40 or so vacancies. It must be asked how they neglected to anticipate that mass exodus? Their bench for the most part was underwhelming. Their plan was to simply hang on. In politics you must always stay on offense and be advancing. Holding on is a losing strategy. The GOP offered no vision that energized the base or that would win over independent voters like the Contract with America. Who in the GOP led an effort like this in 2018 House races? The strategy seemed to be like that when a hurricane approaches land. You hunker down, absorb the brunt of the storm and hope to survive the hit. That is called gambling.

What is important moving forward is to put this behind us. Moving forward means getting ready for 2020. Enough sulking. Let’s regroup and focus on the next election. Job one will be getting Donald Trump re-elected. Sitting around licking our wounds is wasted energy.

Time to move on.