The Irrational, Unshakable Faith of the Collusion Conspiracists

Shawn Mitchell
|
Posted: Dec 04, 2017 12:01 AM
Share   Tweet
The opinions expressed by columnists are their own and do not necessarily represent the views of Townhall.com. 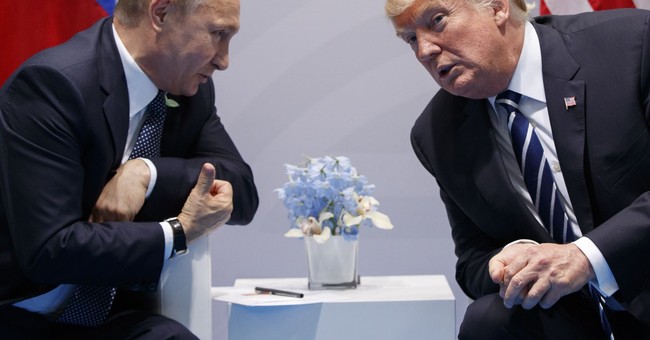 It is amazing the degree to which seemingly intelligent people hold an unshakable belief the Trump campaign colluded with Russia to win the election. Blind to the trumped up narrative unraveling all around them, oblivious to the absence of any evidence or even a substantive allegation of a deal between Trump and Russians, unmoved by every error and scandal the media stumbles into trying to push the story, they simply know it’s true. They smugly sneer and disdain anyone who points out the holes in collusion conspiracy.

Last week’s guilty plea by Trump’s short lived national security advisor Michael Flynn is a prime exhibit of the critics’ unshakable faith in The Narrative. Michael Flynn pled guilty to a single count of lying to the FBI. Instantly the Trump impeachment mob was high fiving and laying bets how soon the trail would lead to Trump and force his exit.

ABC’s Brian Ross added to the frenzy when he breathlessly blurted that Flynn was cooperating with Muller, and would testify that, during the campaign, Candidate Trump had directed him to contact the Russians. The mob went wild. Smoking gun! Collusion! Treason!

By the next day, Ross and ABC had to backpedal in disgrace: The direction to Flynn came after the election, not before. That is, it was about transitional diplomacy on behalf of an incoming administration, not about hacking emails or rigging the vote for a candidate in an upcoming election. The supposed bombshell turns out to be little more than a distracting sparkler. ABC suspended Ross without pay for four weeks.

The information released by Muller the next day was clear: Flynn was directed to engage the Russians about improved relations, about considering opposing a UN resolution against Israel, and about cooperating to fight ISIS in the Middle East. There was simply nothing untoward about those contacts. Why Flynn would have lied to FBI investigators about having them is something of a mystery. But he pled to lying about things that were right and proper, not wrong and collusive. They were completely unrelated to the campaign and voting.

In a sane world, the details of the Flynn plea would have been seen as strong indication there is nothing to the collusion conspiracy. We don’t live in that world.

CNN contributor Errol Lewis promptly brayed: “It’s time to start talking about impeachment.”Lewis presents Flynn’s plea as a confirmation of the collusion narrative; if Trump told Flynn to talk to Russians, that as good as proves the election was stolen. This is utter nonsense.

Lewis wholly misled CNN’s readers about the timing and purpose of the contacts.

Other publications piled on the faux hysteria. Harvard law professor Cass Sunstein took to USA today to wonder whether “it is Trump impeachment time yet?” Sunstein’s piece was actually a mostly platonic discussion of the historical origins and understandings of impeachment. But the headline and lede fanned the frenzy. So too, did Newsweek, eagerly asking: “Will Trump Be Impeached Based on Michael Flynn’s Russia Revelations?”

Each of these publications and writers seriously disserved its readers and committed  media malpractice by wallowing in fanciful speculation untethered from the substance of Flynn’s actions—talking to Russians about policy after the election. The disgraceful performance is probably a mixture of the media’s lust to take down Trump combined with a commercial calculation about clicks and ratings and what the audience wants.

Most the impeach mob does not want to hear exculpatory information. They want to believe Trump is bleeding and going down. In the fever swamps of the Never Trump zealots, no fact or information shakes their conviction. Trump and Putin stole the election from Hillary Clinton. Trump colluded, committed treason, and needs to be removed.

The zealots are actually missing quite a bit of interesting news. They have probably forgotten that CNN had to fire three reporters for fabricating a Trump-Russia story. They probably have not heard that Muller had to fire one of his top aides from the investigation because the aide had exchanged anti-Trump and pro-Clinton texts with another FBI agent.

They almost certainly haven’t heard that the FBI is stonewalling Congress’s attempts to learn more about the aide’s involvement in the case, as well as the FBI’s role in procuring and distributing the infamous Russia Dossier, and that Committee Chair Devin Nunes is threatening to pursue contempt charges. Also they probably missed Harvard law professor Alan Dershowitz’s insightful explanation why Muller’s charges against Flynn signal a weak case, rather than a strong one, and are a good indication for Trump.

None of the drip drip drip of The Narrative leaking away soaks any of their sweet dreams of perp walks and impeachment and an orange president in an orange jumpsuit. They should probably pay a little more careful attention to the news.