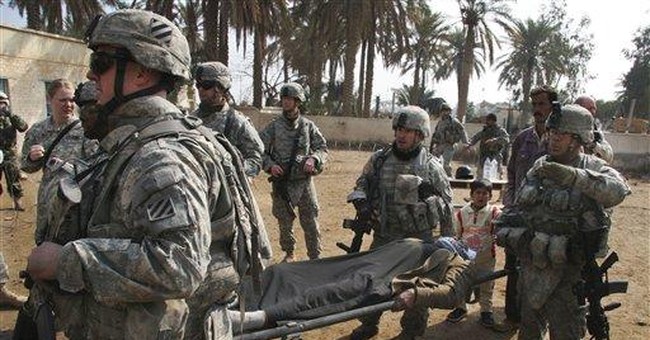 Like my Marine brothers who fought alongside me in the Battle of Fallujah, I know a little something about choices.

When the nosecones of 767 passenger jets punched into the Twin Towers, my choice was simple to make. My choice was not, as the patchouli-smelling Berkeley hippies would have you believe, the duplicitous work of “salespeople known to lie to and seduce minors and young adults into contracting themselves into military service with false promises.” By that rationale, car salesmen are responsible for the 40,000 Americans who will die this year on the nation’s highways.

No, as shocking as it may be to radical anti-military haters, the overwhelming majority of young soldiers, sailors, airmen, and Marines like myself are deeply proud of the choice we made. As shocking as it may seem to the Code Pink crowd, we feel blessed to have been given the chance to defend our nation and be steeled and shaped by those charged with leading us.

Ironically, for people who claim to be “tolerant,” “open-minded,” and “peace-loving,” theBerkeley protestors and their ilk proved just what a sham their operation truly is. If they were really interested in saving the lives of innocents, they would listen to the countless stories veterans bring back from Iraq about pivotal moments of decision that saved lives—both American and Iraqi.

I remember standing in the blinding sun looking through a sweat-drenched brow at the mortars exploding all around. We were the only unit with a view of the mortars’ suspected origin. I had a choice to make. As a young corporal, it was my job to decide whether or not to unleash our firepower at the suspected source of the incoming mortars. Make the wrong choice, kill innocent civilians. Hesitate, watch Marine brothers die.

I made my decision: hold fire. I could not get a clear look at the area. Later, we learned the area had only farmers and schoolchildren.

Much to the chagrin of the Code Pink crowd, we Marines are not blood-thirsty warmongers bent on killing innocents. Anyone who experiences combat comes away with a deeper and more pure understanding of just how sacred and special human life truly is. You don't walk away from the battlefield with the same perspective you brought to it. And you don't hold the lives of your brothers—and of innocent civilians—in your hands and continue to see life in the same way.

No, like most Iraq veterans, I didn't find broken promises serving with the Marines. I found the courage and discipline to become the man I always wanted to be. That man has a strong streak of peace within him, something the Berkeley peace-loving hippies should appreciate.

I fell in love with the people of the Middle East while fighting for them, and my heart goes out to them. I plan to move to Egypt next year as a Christian missionary to reach out to their needy, and when the war's over I plan to return to Iraq, this time without my M-16.

But if Berkeley has its way, the young men and women of their city won't have the freedom to make one of the most honorable choices they could ever make—the right to defend their country. Instead, they would rather make the decision for them, imposing their will upon their people. That does not sound like the freedom I fought for.

While in Iraq, I wrote an “Open Letter to America” that was aimed at the very people who make up Berkeley's city council. You can read the letter in its entirety here. I supported their right to free speech; after all, I was fighting for it, not to mention losing friends for that cause. But I strongly questioned their so-called support-the-troops-but-not-the-war stance. Angry, I called them ignorant, naïve, hippie puppets.

After my tour of duty ended I hoped I was wrong, that I had written that letter out of my own ignorance. But the Berkeley city council proves everything I said in that letter was true. Thankfully, the American Legion and Move America Forward stood up and said “Enough.”

Groups like Code Pink and the Berkeley city council don't care about freedom. They only care about saddling another generation—my generation—with their hippie-loving propaganda.