Looking For Meaning In A Starbucks Coffee Cup 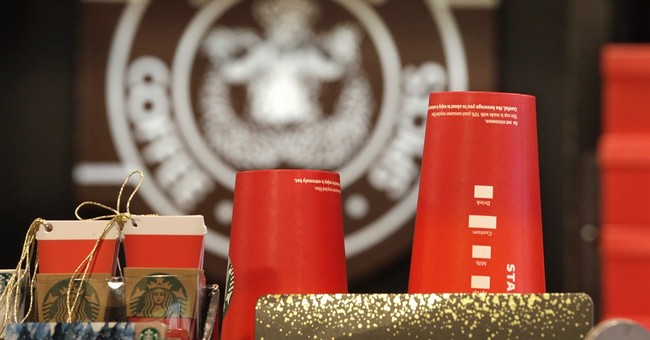 It was hard not to feel like an alien from another planet this week. To sum up the news, a presidential candidate was asked if he'd have aborted a hypothetical baby Hitler; students at an Ivy League university demanded the resignation of a professor for suggesting students ought to be allowed to choose their own Halloween costumes; and another presidential candidate is fending off claims that she wears a wig.

Believe it or not, these are not the dumbest news items that made actual media headlines, however.

That honor goes to a man in Arizona who was triggered by the absence of a cartoon snowflake on his favorite high-priced coffee.

In case you were -- enviably -- just living your lives this week, let me get you up to speed.

Joshua Feuerstein is a self-proclaimed evangelist and social media personality. After picking up his morning joe, he posted a 78 second video rant accusing Starbucks of hating Jesus because their red and green holiday cups don't feature any Christmas iconography on them. "Do you realize that Starbucks wanted to take Christ and Christmas off their brand new cups?" he said. "That's why they're just plain red." He then encouraged people to protest the insufficiently merry cups by taking "coffee selfies" with Christmas messages on Starbucks cups.

This video, posted on Feuerstein's Facebook page, has now been viewed by more than 16 million people. Ever the reactionary, Donald Trump has naturally suggested a Starbucks boycott.

Let me break here to tell you I don't usually have to be goaded into jumping aboard the Outrage Express when it comes to two things in particular: one, secular attacks on Christian America (indeed, I wrote a book called "Losing Our Religion: The Liberal Media's Attack on Christianity); and two, anything involving Starbucks, which regularly embarrasses itself with meaningless nods to political correctness and inarguably terrible coffee.

However, nothing about this story makes even a modicum of sense.

For one, retailers are not required to recognize or celebrate your holiday. This is exactly the kind fetishizing of inclusion that conservatives rightly and routinely lambaste the sensitivity-obsessed left for insisting invade every aspect of public life. Demanding that your coffee purveyor declare its allegiance to your faith is no better than atheists demanding winter solstice banners accompany the town nativity scene.

For another, isn't this issue pretty well covered by the first two commandments? "Thou shalt have no other gods before me" and "Thou shalt not make unto thee any graven image." Bestowing divinity to a thing and worshiping false idols -- in this case, a coffee cup Christmas decoration -- seems to fly in the face of Christian asceticism and God's centrality.

Perhaps most importantly, though, is the fact that Starbucks does in fact celebrate Christmas along with Feuerstein. It offers a Christmas blend coffee (that I would not advise trying unless you like the taste of cedar). It sells "Joy" reusable coffee cups. And advent calendars, for you-know-who's sake! Feuerstein is right neither philosophically nor factually, and yet he's managed to convince countless other outrage addicts -- and one presidential candidate -- to over-caffeinate along with him over a problem that doesn't really exist.

This story might be dumb, but it's not unimportant. Charlatans like Feuerstein and false claims of religious discrimination and the whitewashing of Christianity from public life diminish the seriousness of actual stories of religious intolerance -- say, the high school football team that's told it can't pray together before a game, or the Christian business forced to provide contraception coverage in its employee health plan.

It diminishes, too, the horrific atrocities committed against Christians around the world in the name of secularism. Is Mr. Feuerstein's coffee cup really the most pressing example of religious injustice he can use his platform and his ministry to highlight?

The Founding Fathers' intention in separating Church from State was to ensure the survival of public worship, free from persecution. It was not to force a retailer to adorn its wares with religious kitsch.

Moreover, if Feuerstein's faith is so fragile that a missing cartoon Christmas tree sends him into a conniption fit of aggrieved angst, it's probably time for some serious soul-searching, prayer and decaf.