Rubio Shows Republicans How to Win 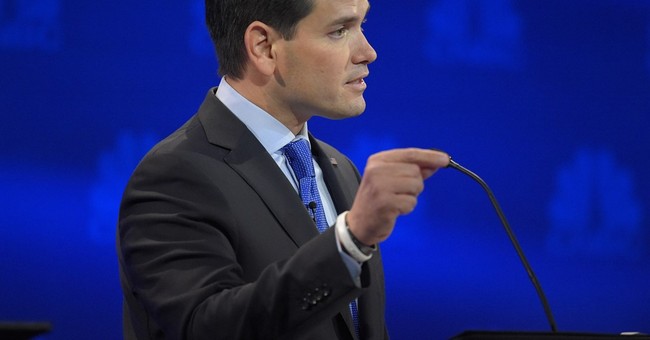 In Wednesday night's CNBC Republican debate, Marco Rubio found the thus-far mysterious and elusive juju that only Donald Trump and Ben Carson have been able to tap into in a primary dominated by otherwise utterly unexplainable forces.

How, for example, have Trump and Carson been able to rise through the polls while offering little substance and making dozens of controversial statements that would be disqualifying for any other candidate?

While many have insisted it's merely the fact that they aren't politicians, I think it goes deeper than that, and Rubio is perhaps the first so-called "establishment" candidate to figure it out: Voters want to see you win.

And did he ever. On Wednesday night he proved that no matter the attack, he's not only ready for it, but he's going to win the point.

In nearly every volley, either with the debate moderators or the other candidates, he owned the moment. On questions about his finances, he pounced, calling the allegations discredited and turning them into an opportunity to talk about his utterly relatable life. In response to a question about his Senate voting record while running for president, he parried an attack from the Sun Sentinel, a major Florida newspaper, which in a scathing editorial had told him either to do his job "or resign it." Rubio pointed out that his roll call attendance was better than that of Sens. John Kerry and Barack Obama when they were running for president, concluding, "This is another example of the double standard that exists in this country between mainstream media and the conservative movement."

His response was met with a wave of applause. He was prepared for these attacks and he was deft, lawyerly and gutsy enough to win them.

And the win, I'm convinced, is what these voters care about right now. Trump wins even when what he's saying sounds neither conservative nor politically prudent; he can shut down an attack better than anyone. And in a totally different way, Carson does the same. He can say something patently absurd or offensive, and yet he refuses to concede the point.

And there's plenty of evidence that voters will get behind anyone who's winning -- at least as long as they keep winning. Carly Fiorina had her best night in the CNN debate last month by winning against a number of attacks, which included a couple from Trump himself. Her post-debate boost in the polls showed that even winning against Trump is still winning. This is Rubio's -- and everyone else's -- ticket to the nomination: Win, win, win.

But while Rubio managed to define his debate performance by his strategic and decisive wins, another candidate is slowly being defined by his penchant for losing. Jeb Bush has shown time and again during this primary that he's often unready for coming questions and attacks -- even totally predictable ones -- and that when he does take a swing he can't land the punch.

Case in point Wednesday night: After Rubio earned huge applause for defending his voting record, Bush bafflingly decided it was the perfect time to hit him on the issue Rubio had just resoundingly won.

"Could I -- could I bring something up here?" he stammered.

"Marco, when you signed up for this, this was a six-year term, and you should be showing up to work," he pressed. And then a line he'd clearly rehearsed: "I mean, literally, the Senate -- what is it, like a French work week?"

Rubio was ready for this, too, smacking back that the only reason Bush was critical of him now was because "someone has convinced you that attacking me is going to help you." Rubio again won the point -- a point that wasn't even on the table until Bush offered it up.

In this primary, one thing is becoming more and more clear: For better or worse, these rhetorical wins matter more to voters than policy, at least for the moment. Nearly every single applause line in Wednesday's debate came not in response to a policy proposal but after a candidate knocked out some enemy, perceived or real.

Rubio showed he can not only survive but thrive. Bush, on the other hand, needs to figure out how to win or he will be in real danger of becoming the John McEnroe to Rubio's Roger Federer -- the guy you remember more for complaining about the point than the guy you remember for winning the point.