Obama Wisely Declines to Start a War on Meat 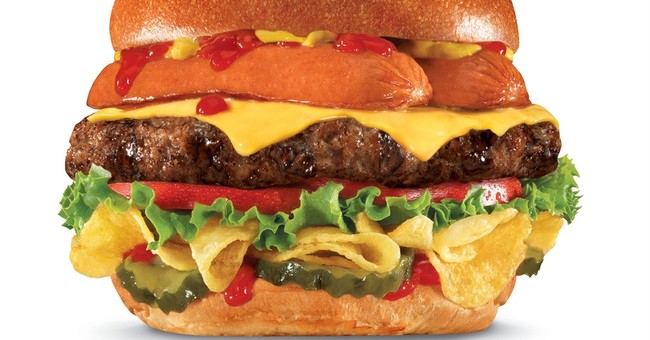 This week, the Obama administration did something uncharacteristically sensible: It declined to urge Americans to eat less meat.

Despite the recommendation of a top nutrition advisory panel to use federal agencies to set new dietary guidelines involving fewer cheeseburgers, barbecued ribs and filet mignon -- all in an effort to merely save the planet -- administration officials quietly announced that such new guidelines are not "the appropriate vehicle for this important policy conversation about sustainability."

Liberal supporters of kudzu climate change legislation were furious that the president wouldn't take the advice of Scientists-with-a-capital-S -- who are to the left the only moral authorities that matter -- and use his considerable bully pulpit to cut the bull, literally.

"A meat-eater's typical diet ... is responsible for almost twice as much global warming as your typical vegetarian's and almost triple that of a vegan," Josh Voorhees lamented at Slate after the news broke. "(An) Oxford University study suggested that cutting your meat intake in half could cut your carbon footprint by more than 35 percent."

All of this may be true. But there are more than a few reasons why Americans will not -- and should not -- stop eating meat.

The first is that it will most certainly not save the planet. To have any meaningful impact on the global climate, a meat abstinence campaign would require worldwide cooperation and compliance. Try telling Brazil, the world's largest exporter of beef and the second largest beef producer, to slow its roll, especially in light of its struggling economy. Also, cows have other intrinsic values than meat, such as milk (and sacrality, if you're one of the world's billion Hindus), that will likely assure their longtime survival.

Another reason the scheme won't work is that humans prefer to eat meat. Evolutionarily and biologically -- also Science-with-a-capital-S -- we are meat eaters. It's why we have digestive tracts specifically designed to process meat. It's why our enzymes evolved to digest meat. It's why with greater meat consumption we became more intelligent and social than other species. Denying ourselves meat would, both in the short term and over centuries, have a disastrous effect on human development. Ex-vegan Lierre Keith, author of the controversially militant anti-veganism book "The Vegetarian Myth," says: "A vegetarian diet -- and especially a vegan diet -- does not provide for the long-term maintenance and repair of the human body. So vegetarians are on drawdown of their biological reserves."

But meat hasn't just fed our bodies. It's fed human civilization's soul. Vaclav Smil's book "Should We Eat Meat?" connects meat and "cooperative hunting" to the "development of language and socialization." The domestication of animals was a significant factor in evolving from Old World societies to modern ones. When a Third World country graduates to a developing nation, one of the first thing it does is supply its citizens with more protein-rich meat.

But even if we did collectively decide to turn to a vegetarian or meat-light economy, if you like your vegetables you'd better be prepared for more hunting.

Hunting and animal population control is why you have readily available produce at your favorite grocery store. Agricultural producers experience 10 percent crop loss in wildlife damage from deer and other wildlife species annually, according to aUniversity of Nebraska study. State governments regularly use taxpayer dollars to compensate farmers for their losses. If we're going to feed our nation with veggie burgers, get ready for a deer explosion -- and the car accidents that will accompany it.

While the Obama administration made a political decision not to upset the influential livestock and agriculture industries when it ignored experts' orders to lower meat consumption, it was also the right one. And as we're learning, the government has a pretty lamentable record when it comes to telling us what we should and shouldn't eat.

After long recommending that we avoid whole milk -- it was in fact banned from school lunch programs -- many nutritionists now say the opposite might be healthier, that consuming fat can lower incidence of heart disease.

As climate change adherents insist on the science that supports their cause and ignore the science that does not, while foisting selective, incomplete or flat-out wrong prescriptions upon average Americans who must continually adapt to new behavioral mandates, this week's decision was a win for meat lovers everywhere. As if eating meat wasn't already winning.