First Debate Behind Them, Here's What GOP Candidates Must Do 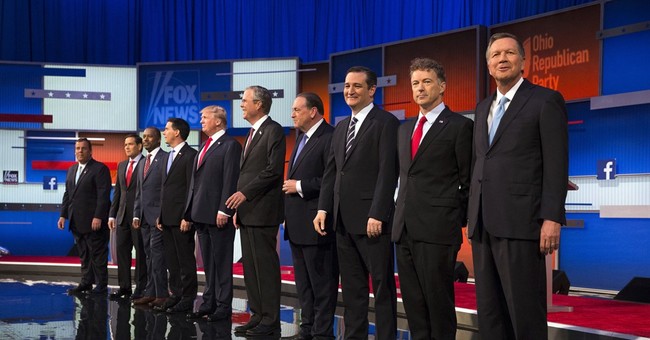 Of the 10 people who stood elbow-to-elbow, vying for only a handful of minutes to make their mark, it's safe to say no one won the Republican Party's first prime-time debate in Cleveland. But despite the crowded stage and limited airtime, we did learn a lot about the candidates and about what each of them needs to do moving forward. If this was a first-round audition, who gets a callback? And what should they work on for round two?

Let's start with the best. Marco Rubio, Chris Christie and John Kasich all had great nights on Thursday and deserve an automatic ticket to round two. To hit for the cycle in these debates, you need to accomplish four things:

--Have a "personality" moment, where you show voters your wit, humor or passion.

--Make a substantive policy point that stays with voters.

--Have a successful takedown of another opponent.

--Take an opportunity to correct a past misstep or current misperceptions.

Christie and Rubio accomplished it, and so did Kasich -- who arguably had the best night, considering he barely made the stage.

Notes going forward: These candidates must maintain momentum. It's a long time until the next debate in September. They need to stay in the news so that, come that debate, all eyes are on them.

Scott Walker and Jeb Bush almost hit for the cycle, but not quite. Walker missed a personality moment and avoided taking anyone else down. Bush seemed shaky, and I'm not sure he did much to change perceptions that he's too moderate on immigration and education.

Notes going forward: Both are formidable candidates who deserve to stick around a long time. But both need more fire, more excitement. Start throwing punches. Lethal ones.

Mike Huckabee had a great night -- with a certain wing of the party. He hit it out of the park with evangelicals and hardliners, and he stood out for his conviction and gifts as a debater. But did he win any new supporters?

Notes going forward: Take on Donald Trump. The guy who's captured the early excitement of the party is not going to be able to maintain it, I predict (see below). When voters see the emperor has no clothes, they'll want to move elsewhere. Huckabee has an opportunity to win them if he can prove he's a better, more substantive version.

Speaking of Trump, he was out of his league. Standing next to serious candidates with actual policy points to make, he looked unprepared and shallow. (But obviously.)

Notes going forward: The moderators, other candidates and Trump himself managed to put a series dent in his conservative cred. His die-hard supporters don't seem to care, but if he wants to win more than just a sliver of the base, he needs to make it clear that he's both serious and conservative. Has he heard of this thing called a policy speech?

Rand Paul and Ted Cruz really missed their chance to show voters they're more than just ideologues who can grandstand on the Senate floor. Both in demeanor and on substance, neither looked particularly presidential -- or likeable, for that matter.

Notes going forward: Both need to make significant campaign staff and message shakeups. They've been missing in action, and what we have seen only reinforces the notion that they are fringe candidates.

Ben Carson had as good a showing as he is likely capable of. But he still looked wholly unprepared for the national stage, and should not take up a spot better covered by Rick Perry, Carly Fiorina or Bobby Jindal, just to name a few.