Can McCain Really Survive Another Round of Roulette? 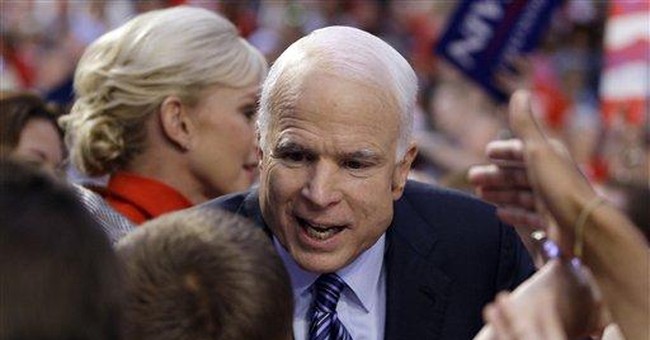 A new rallying cry is quietly whipping through the conservative base. In addition to a growing number of Republican supporters who think John McCain should go after Barack Obama's nefarious associations with folks like Tony Rezko, William Ayers and Jeremiah Wright, some are also now suggesting that McCain breathe new life into his sputtering campaign by announcing some potential cabinet appointments.

The thinking seems to be as follows: link McCain to other Republican leaders like Mitt Romney and Rudy Giuliani -- who have enjoyed a few months out of the spotlight and thus regained any credibility they'd lost during the Republican primary -- and nervous American voters will once again trust Republicans to right the ailing economy and deal with greedy Wall Street, Fannie Mae and Freddy Mac, and corrupt government bureaucrats better than anyone Obama would appoint.

If voters have lost some faith in McCain over the past few weeks, he can shore up his ideological and political bullpen with a little strategic name-dropping, while simultaneously contrasting his own virtuous relationships against Obama's unseemly ones.

I admit, the idea of McCain, Romney and Giuliani running around the White House together like the three musketeers sends a chill up this Republican's stocking-clad leg. Plus, I figure, what does he have to lose at this point? But I wasn't sure a pre-emptive cabinet announcement was really the best idea for a campaign that's already been accused ad nauseum of cheap ploys and transparent acts of desperation. McCain's a risk-taker, as we all know, but even professional poker players -- and Wall Street investors -- lose once in a while. So I asked some of my friends to weigh in, and the reviews are mixed. Here's what they said:

"McCain is in a death spiral. So why not? I guess it could depend on who he names, but does it really matter? The liberal press will eat him alive regardless. He's got to appeal to the undecideds. Bottom line is, the status quo is not working for McCain, so if I were him I'd absolutely give it a shot."

"I'm opposed to the idea of pre-announcing potential cabinet members as a campaign strategy. First of all, it looks entirely presumptuous. Secondly, it places a premium of attention on an individual who is not at the top of the ticket, and in order to make the case for the presidential candidiate, that is where the attention always needs to be -- on his or her ideas, his or her vision, his or her plans for leading the country. Also, such a move can and will be perceived as a crutch, inviting criticism that the candidate is trying to paper over a perceived weakness. Lastly it invites principal-like scrutiny of the individuals named. Every utterance, association, position they have ever taken will provide fodder for the opposition to attack. In short, there's no value added to it."

"It might help, but I'd be nervous about the names he would name. Remember: He said he would appoint subprime crisis-enabling Democrat Andrew Cuomo to replace staunch conservative Republican Chris Cox at SEC. If he's got more like that up his sleeve, he'd be better off keeping his mouth shut!"

Nick Rizzuto, founder of Conservative Punk and producer of the Andrew Wilkow Show on Sirius radio:

"Considering that the prevailing (and ignorant) opinion is that this financial crisis is the fault of Republican lack of action and "de-regulation", adding more Republicans to an already faltering ticket doesn't seem to be a great idea. For example putting a Mitt Romney in as treasury secretary might read as putting the fox in charge of the hen house, considering Mitt's corporate background. Announcing Rudy as your Attorney General borders on irrelevant seeing as no one is really concerned with any legal issues on a federal level. The Patriot Act, for example, has turned out to be a non-issue."

Apparently if you ask my friends, McCain has close to a 50/50 chance of getting this one right. Those aren't great odds. It's likely McCain will continue to go after Obama's relationship with William Ayers, Reverend Wright and others. His constiuents, after all, have asked him to. But can he afford another risky campaign move with pre-election cabinet appointments? Or should he bypass this spin of the roulette wheel? I guess it depends on whether he's feeling bullish or bearish. Campaign strategy isn't exact science, of course, but it shouldn't always be a gamble either.

I Know Exactly Who Is To Blame for This New Wave of COVID-19, and I Know Who Is Making a Fortune on It
Townhall
'This is a lie': DeSantis spox calls out Nikki Fried for sharing Covid-19 disinformation
Twitchy
Texas Woman Killed Boyfriend After Sexual Assault, and It Highlights Why 2nd Amendment Matters
Redstate
Mexico's Turn: The Border Mess Is About to Get Much Worse
PJ Media