Matt Rosendale: A Successful Businessman Who, Like Trump, Can Make Montana Great Again

Scott Wolf
|
Posted: Jul 11, 2018 12:01 AM
Share   Tweet
The opinions expressed by columnists are their own and do not necessarily represent the views of Townhall.com. 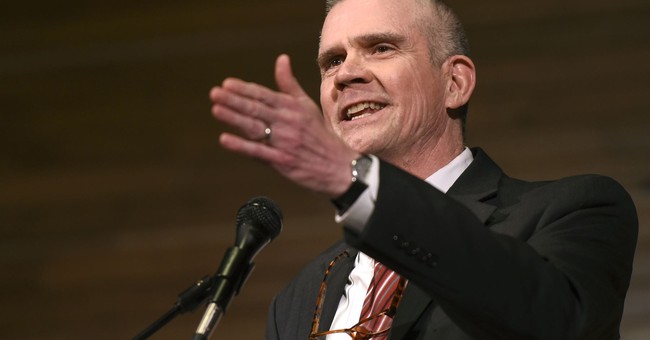 And just like President Trump, he will help make America — and Montana — great again.

But Senator Jon Tester is desperate to convince Montanans that they shouldn’t vote for “Maryland Matt Rosendale” — solely because he’s a successful businessman who wasn’t born in our state.

In a 14-page anti-Rosendale document posted to his website, Tester directly attacks Rosendale for his success. The document criticizes Rosendale for being a multimillionaire — as if that’s a bad thing — and hailing originally from Maryland.

Apparently, Tester believes successful people who were born in another state aren’t welcome in Montana. Most Montanans would disagree, however.

Not so long ago, the political class railed against another candidate for being a very wealthy outsider and real estate developer. That candidate is now President Donald Trump, and Montanans overwhelmingly supported him for president. The qualities that made President Trump so successful in the business world are exactly the same qualities that are making him such a successful president.

Rosendale, who has lived in Montana for nearly two decades, has proven in the Montana House of Representatives, the Montana Senate, and as State Auditor that he is dedicated to serving our state and its people.

Unlike Senator Tester, I actually think it’s wonderful when folks want to move to Montana. We know we live in one of the greatest states in the country, with one of the best ways of life, and some of the best people. How can we be upset when people from the coasts recognize that too?

Senator Tester has voted with Senate Minority Leader Chuck Schumer 84 percent of the time during this Congress and he’s voted with the Democratic Caucus 85 percent of the time. He voted for Obamacare when it first passed — and against President Trump’s attempt to fix it. He also voted against President Trump’s tax cuts, which have completely reinvigorated the American economy.

Tester is also radical when it comes to immigration. He voted against a law that would have cracked down on sanctuary cities and against “Kate’s Law”, which would have increased penalties for illegal aliens who re-enter the U.S. after deportation.

Senator Tester also disgraced himself and our state when he engaged in the very public and prolonged character assassination against President Trump’s Veterans Affairs nominee, Dr. Ronny Jackson. Tester may talk like a Montanan, but he certainly doesn’t act like one.

In trying to smear Matt Rosendale like he smeared Jackson, Tester is only highlighting what will make Rosendale such a great senator for our state — he’s a successful businessman just like President Trump.