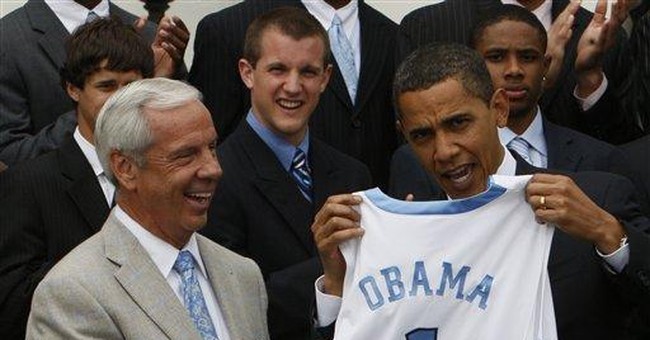 Whose interest was President Obama serving when on March 30 he ordered Chrysler to either conclude a merger with Italian automaker Fiat within 30 days or lose federal bailout funds? That untimely announcement placed Chrysler in the untenable position of accepting whatever Fiat offered, literally cutting the legs out from under the struggling American carmaker’s negotiating platform. Some financial analysts had already determined that what Fiat was offering was a very bad deal for Chrysler. “The steal of the century,” Forbes columnist Jerry Flint wrote of the deal back in January, “Fiat gets Chrysler for next to no money, and American taxpayers must throw in $7 billion to make it happen.” By most accounts, Chrysler was in real trouble, but by announcing to the world that Chrysler had no other alternatives Obama effectively told Fiat that Chrysler would accept whatever they offered, eliminating Chrysler’s ability to cut a better deal.

Why would President Obama undercut a US company, involved in a heated negotiation, in favor of a foreign company’s interest? Clear answers are not available, but there is one very curious shareholder in Fiat that raises some interesting questions. The African nation of Libya owns at least a 2 to 3 percent stake in Fiat and thus makes Muammar Qaddafi, who controls the wealth of Libya, a direct beneficiary of the deal favoring Fiat.

Does Obama owe Qaddafi? That is a tough question to answer, but Obama’s record-shattering 700 million dollar presidential fundraising operation and a revealing speech made by Qaddafi nearly a year ago seems to undress Obama’s inexplicable sabotage of Chrysler’s negotiating position with Fiat. Before anyone was suspicious of the sources of Obama’s campaign funds, Qaddafi made a speech that was carried by al Jazeera on June 11, 2008 and translated by The Middle East Media Research Institute (MEMRI).

"All the people in the Arab and Islamic world and in Africa applauded this man. They welcomed him and prayed for him and for his success, and they may have even been involved in legitimate contribution campaigns to enable him to win the American presidency."

Is Qaddafi revealing his knowledge of something that no one else even suspected at the time? Since Qaddafi’s June 08 speech other evidence has surfaced suggesting that Obama raised significant sums from dubious sources in Qaddafi’s neighborhood including tens of thousands of dollars the campaign was forced to return once it was revealed its origins were in Gaza, the Middle East. So far there has been very little interest in the sources of Obama’s massive fundraising, and with Democrats in control of both houses of Congress it is unlikely that there will be an investigation into what many believe is the most prolific fundraising abuse ever.

"But we were taken by surprise when our African Kenyan brother who is an American national, made statements [about Jerusalem] that shocked all his supporters in the Arab world, in Africa, and in the Islamic world… As you know, this is the farce of elections - a person lies and lies to people, just so that they will vote for him,” Qaddafi stated in his speech that got no coverage from the main-stream American media. Since his election, it has been pro-Israel Americans who have been shocked at how quickly Obama’s policies turned hostile toward Israel, such as the 900 million in aid headed to Gaza after they attacked Israel with mortars late last year, and forcing Israel to negotiate with Hamas.

With the precision of a campaign insider, Qaddafi also predicted a recently announced Obama policy regarding Israel nearly a year ago: "We thought he would say: 'I have decided that if I win, I will monitor the Dimona nuclear plant, and the other WMDs in Israeli's possession.”

Last week, a state department official announced that the Obama administration would pressure Israel to sign the Nuclear Non-proliferation Treaty that would allow Obama to inspect Israel’s nuclear weapons program, something the Israelis have kept secret since its inception.

What is most amazing is that the propaganda arm of the Middle East, the anti-American al-Jazeera network, has proven more informative about Obama’s Middle East policies than the sycophantic American media.