"Torture" Methods the CIA Should Have Used 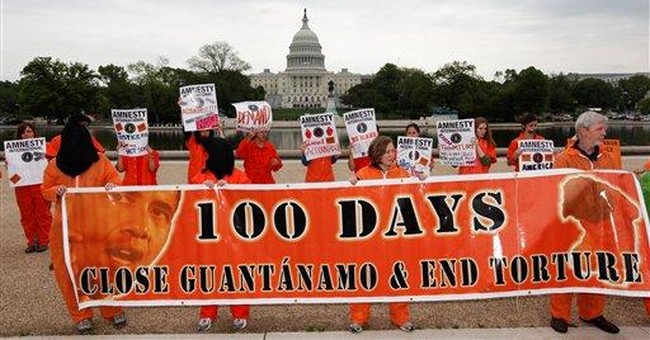 The Democrats and the media are having a field day using the “enhanced interrogation” issue to try and criminalize techniques used on terrorists to try and figure out how to protect America from another attack. Since the Global War on Terrorists began, captured jihadists have claimed that they were tortured, and of course Democrats, media and the American Civil Liberties Union automatically took their word for it, even after we recovered a terrorist training manual that instructed captured terrorists to claim they were tortured. The Left’s selective outrage over what is considered inhumane treatment of brutal terrorist jihadis suggests a level of understanding only available to those on the crazy Left. These are the same people who refused to believe Paula Jones, Juanita Broderick, Kathleen Willey and others when they said they were sexually harassed by Bill Clinton. But when terrorists claim, just as their terrorists’ manual instructs them to do, they were “tortured” by their American captors, the same people demand an investigation on the basis that it would be gravely immoral not to. The Bush administration’s mistake was explaining to the Democrats and the media that these were people trying to kill Americans. However, the better strategy would have been to announce that the detainees were what was left of the Nicaraguan Contra’s, who, during the 1980’s tormented those benevolent, peace-loving Communists who assassinated their president and waged a revolution murdering women and children in the process. The Democrats would have demanded that they be drawn and quartered slowly for the crime of trying to stop the Communists from taking over their country.

Another way the Bush administration could have averted the entire investigation of their “enhanced interrogation techniques” would have been to consult with the Democrats on what they consider to be “humane” methods of interrogation.

The CIA could have sought guidance as to what is legal versus what is illegal in the Democrat established “enhanced sexual harassment techniques.” For example the agency could have used the Ted Kennedy method of “waterboarding” in the front seat of an Oldsmobile. The terrorists wouldn’t have lived to provide much information, but on the other hand, look at the respect Ted Kennedy has among the spastically hypocritical Left currently waging war against the selfless warriors fighting to preserve the American way of life.

The Bill Clinton defense could easily have been used by CIA agents by just saying that the interrogations were a “private matter”, then it would have been left to our imaginations to figure out what they were using cigars for in their interrogations. The Army Reservist who went to jail, for among other things, exposing her breasts to an inmate at Abu Ghraib clearly didn’t get the Clinton memo on how to properly expose oneself with immunity. In this case clearly the interrogators needed to expose their genitals and demand the inmate “kiss it.” Clinton refers to this enhanced technique as “dangling death” Paula Jones on the other hand refers to it as “the caterpillar” treatment.

Under the Clinton rules of engagement all is legal, ala Juanita Broderick, as long as you dispense medical advice following any forced coercive methods such as “put some ice on that.” It would also be necessary to have a team of disinformation agents standing by to deny, distort, fabricate and generally protect the interrogator, like the main stream media did for Clinton. Of course, that is the same main stream media that savaged the Department of Defense for even having a discussion about an office that would just try to explain the American side of the war story to the press.

And, by the way, couldn’t the press corps’ treatment of Linda Tripp be considered far more degrading than anything the CIA is accused of doing to a terrorist?

Another thing the CIA could really use is a “missile defense”, that is, when they are under investigation for something, they could say there was a national security emergency that needed to be dealt with immediately and use it to distract the nation’s attention. Remember how when Clinton’s peccadilloes were on the front page? There would be a dangerous aspirin factory in Africa that had to be targeted with cruise missiles so Clinton could claim he was a “president at war” and therefore unassailable. We all know how the Democrats feel about undermining the president during wartime, why, to do so is practically a war crime itself well, that is, as long as the wartime president is a Democrat and thusly at war for the wrong reasons. The stronger the evidence the bigger the target must be, in case of impeachment, for example, the CIA would have to commit several Air Force bomber wings and missile batteries against a nation such as Yugoslavia and pretend it is a cause worth fighting. Speaking of torture, wouldn’t ordering the bombing of hospitals and historic sites be considered war crimes? Few are aware of this, but several of NATO allies were accusing Clinton of that very thing. Not that the mainstream media would have informed anyone of this, after all, the Serbs were traditional allies of the US, in order to qualify for mainstream media protection you must be a sworn enemy in desperate pursuit of killing American civilians.

Memo to the brave men and women whose job it is to defend America: Get the Democrats handbook and start using it- but first recognize that you must pretend that you are mocking America while you are defending it, otherwise you will be hauled in before the Democrat inquisition and tried for excessive jingoism.