Protesting During the National Anthem, Freedom of Speech and Justice

Scott Rasmussen
|
Posted: Sep 06, 2018 12:01 AM
Share   Tweet
The opinions expressed by columnists are their own and do not necessarily represent the views of Townhall.com. 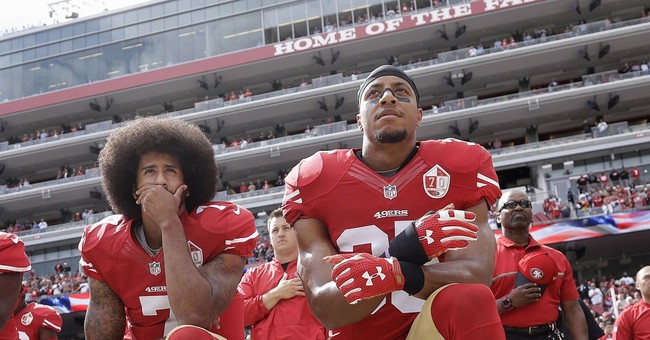 Sixty-nine percent of voters nationwide believe freedom of speech is "absolutely essential." Another 23 percent believe it is "very important." In a deeply polarized political era, it's encouraging -- and amazing -- to find that 9 in 10 Americans recognize this basic freedom as being so important.

However, agreeing that free speech is important doesn't mean agreeing with the way others use that freedom. A prime example of this in today's world has been the intense debate about NFL players taking a knee during the national anthem.

So when Colin Kaepernick first disrupted that cultural norm, people noticed. When other players joined him, the protests seemed to sometimes generate more coverage and interest than the game itself. The league has very publicly struggled to find a solution that the players can accept and also addresses the reality that 6 in 10 fans disapprove of the protesting.

If you listen to the loudest voices and the political echoes surrounding this debacle, it would seem as if there were nothing on which the opposing voices could agree. But at ScottRasmussen.com, we believe that there is far more common ground in American society than in American politics. We try to find that common ground by asking questions from a different perspective and thus providing a richer understanding of the topic at hand.

In the case of football and the national anthem, we decided to focus on a different aspect of the game experience. Do fans approve of the stadiums' continuing to sell concessions, such as beer and popcorn, while "The Star-Spangled Banner" is being played? Nearly half of NFL fans and most voters nationwide disapprove. In other words, not only do they think it would be nice if the players would simply stand to respect the national anthem but also they think it would be nice if the stadiums stopped selling for a moment to show the same respect.

And, it should be noted, most Americans seem to understand what both sides are trying to say. The players say they are taking a stand for justice, and 67 percent of voters agree that the United States today does not provide liberty and justice for all. There may be disagreement on the details and how far short we fall, but there is a widespread recognition that all of us have work to do before our country fully lives up to its highest ideals.

At the same time, 84 percent believe the United States is a land of opportunity. That very fact is what gives the affluent football players the opportunity to be heard. All of us are fortunate to live in a nation founded upon the noble ideals of freedom, equality and self-governance.

Though freedom of speech is sometimes uncomfortable, it remains essential. America's football fans seem to appreciate that fact, in perhaps the most interesting finding from our survey. We offered them two options: Would they rather the league stop playing the national anthem to avoid all the distractions, or would they prefer that the league play the anthem and allow the protests to continue. Sixty-three percent of NFL fans chose the latter.