'Black Lives Matter' Comes For Mayor Pete, But They Still Don’t Have A Point

Scott Morefield
|
Posted: Jun 24, 2019 12:01 AM
Share   Tweet
The opinions expressed by columnists are their own and do not necessarily represent the views of Townhall.com. 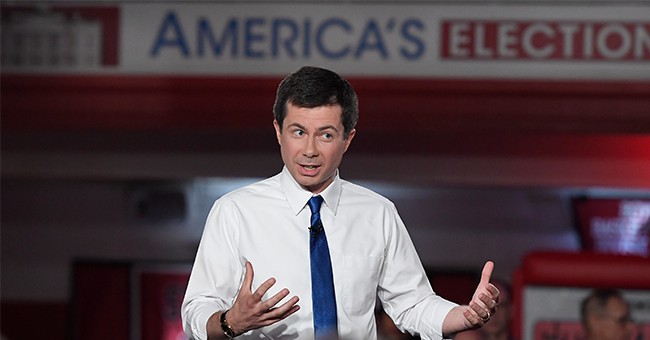 That South Bend Mayor Pete Buttigieg got waylaid by a group of Black Lives Matter protesters in his own hometown Friday following the fatal police shooting of an allegedly knife-wielding black man is testament to the fact that ideology and pandering will get you absolutely nowhere with these folks. Buttigieg, you see, is gay, as liberal as they come, and totally on board with every insane ‘social justice’ redistribution scheme these Marx-lovers could possibly dream up, but despite all that, he remains a white male in a position of leadership in a town where a white police officer shot a black man.

In other words, he doesn’t stand a chance.

To rehash, South Bend police Sergeant Ryan O’Neill, who is white, shot 54-year-old Eric Logan, a black man who was in the process of vandalizing a vehicle when confronted last Sunday in the wee morning hours. He claims he did so, however, only after Logan approached him with a knife and refused repeated orders to drop it. No camera footage or witnesses exist, but neither, according to Buttigieg himself, is there any proof that O’Neill acted out of racist motives.

CNN’s Friday footage of “Black Lives Matter” sign-holding protesters confronting the South Bend mayor and 2020 Democratic presidential candidate is all you need to see if you want to witness the “logic” of progressives in this debate.

Get a load of the dialogue - or what passed for dialogue - that ensued:

“Can you say it to us today in front of all these cameras that black lives matter?” one protester asked, as if he suspected the mayor was going to look into the cameras and say, “nah, black lives don’t matter.”

To which a seemingly incredulous Buttigieg responded, “Did you just ask me if black lives matter?”

“Yes, we want to hear you say it!” another female protester shouted.

“Then fire your cops!” shouted a male protester.

“Are you a racist?” another protester asked Mayor Pete, apparently with a straight, completely serious face.

“What matters about a black life to you, Mayor Pete?” asked another female protester. “Answer that!”

“The same thing that matters to me about my own,” he responded.

“You truly running for president and you expect black people to vote for you?” asked a clearly emotional woman holding a sign that said, “Who do you call when police murder?”

“I’m not asking for your vote,” Buttigieg told her, probably holding back tears by now.

“You ain’t gonna get it either,” she replied.

So yeah, it’s pretty hard to imagine this confrontation going any worse even if Buttigieg had been a Republican.

Now I’ve got a LOT of issues with Mayor Pete, and Joe Biden for that matter (while we’re on the subject of politicians being baselessly accused of racism), but the notion that either are racist is absolutely absurd.

No, the problem in this case lies not with pandering politicians, of which there are many, but rather with the insane, illogical “Black Lives Matter” movement. In their view, white police officers are racist super predators literally stalking black neighborhoods, just itching to shoot a black male at the slightest provocation. And any black male who does end up getting shot, even if they were charging police with an Uzi in one hand and a Molotov cocktail in the other, must have been targeted because the officer who pulled the trigger, if white, must be a raaaacist.

It would be one thing if they had a point, or even the slightest, microscopic tip of one. But no, other than occasional anecdotal examples there’s not a shred of hard data nor a semblance of a logical explanation to be found. Lacking that, their arguments quickly devolve into what most leftist arguments end up as, empty emotionalism.

Want proof? Manhattan Institute research Heather Mac Donald has loads of it, gathered from readily available state and federal crime statistics. Her findings include the fact that, of 233 blacks fatally shot by police in 2016, only 16 were “unarmed,” and even several of those involved officer assault and violently resisting arrest. And that 233 represented only 24.2 percent of the 962 people shot and killed by police that year.

“Black people accounted for 31 percent of police killing victims in 2012, even though they made up just 13 percent of the US population,” reads this Vox story complaining about the supposed disparate treatment of blacks. However, considering the fact that blacks comprise around 40 percent of the prison population, more than three times their representation in the general population, an argument could be made that police are actually less likely to shoot black suspects than those of other races.

And it’s not just a hunch. Not only are white police officers NOT in general trigger-happy racists just looking for a black person to shoot, most are actually 25 times LESS likely to erroneously shoot an unarmed black suspect than a white or Hispanic one, as this Washington State University-Spokane scientific study found.

“In sum,” wrote professor Dr. Lois James, “this research found that participants displayed significant bias favoring Black suspects” in regards to whether or not to pull that trigger.

The interracial disparities aren’t just limited to police shootings. Of 631,830 violent interracial non-homicidal crimes between 2012 and 2015, Mac Donald found that 540,360, or 85.5 percent, were black-on-white felonious assaults. Only 91,470 were white-on-black. All this despite the fact that whites make up 61 percent of the population and blacks comprise 13 percent.

Sadly, being a good leftist means Mayor Pete isn’t ‘allowed’ to use any of the above logic. Instead, he has to pretend these idiots have a point and cite pointless platitudes about “fixing” the virtually nonexistent ‘problem’ of rampant police, and white, racism.