Seven Key Reasons Republicans Are Trending Up For The Midterms

Scott Morefield
|
Posted: Oct 15, 2018 12:01 AM
Share   Tweet
The opinions expressed by columnists are their own and do not necessarily represent the views of Townhall.com. 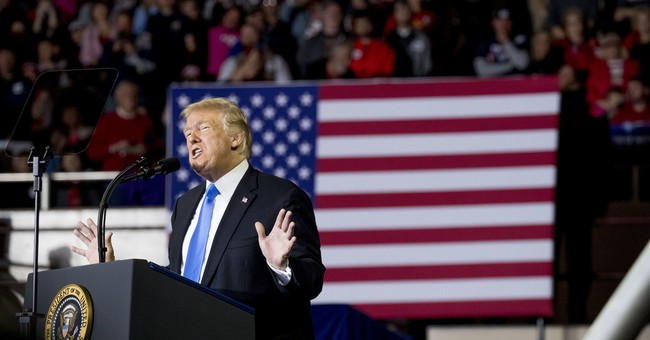 Johnson City, Tennessee boasts a population of less than 70,000 people. By the time the presidential motorcade rolled into town on a hot, muggy day in early October, over 90,000 would-be attendees had downloaded online tickets for the event, and at least 30,000 had descended upon a stadium that holds a mere 8,000 or so, hoping to get a coveted spot to see President Trump.

As I wound my way through the crowd to the press entrance, I could feel the electricity in the air, the palpable excitement at the prospect of experiencing something unlike anything that had likely ever occurred at Freedom Hall. The fortunate ones who made it inside had waited in line for hours beginning the night before. The rest seemed more than content to watch the president speak on the big screens the campaign set up outside. I marveled at the people calmly baking in the hot sun, standing in massive, snaking lines around the stadium grounds, almost to a person decked out in some sort of MAGA or Trump attire, clearly excited just to be in the moment. Most knew their odds of actually getting in were slim, but they came anyway, because history, because Trump, because MAGA, and because of the intense camaraderie that comes from being around thousands of people who want the same direction for America.

It’s called voter enthusiasm, and it’s something Republicans aren’t supposed to have in the era of the Blue Wave, in midst of a GOP presidency, especially that of one Donald J. Trump. Yet I experienced it first hand, and thousands upon thousands experience it at every Trump rally. In 2016, people wondered why the businessman-turned-politician kept lagging in the polls despite the fact that he filled stadiums and Hillary Clinton could barely fill Hampton Inn conference rooms. As it turned out, those people typically don’t respond to pollsters, but they’ll stand in the burning sun for hours to see the man who is changing America, and you can bet your last dime they’ll stand in line on election day to cast their ballot.

So yeah, that’s the first reason Republicans may do better than expected this November, but thankfully there are several more:

Angry Mobs - “In their quest for power, the radical Democrats have turned into an angry mob,” President Trump told a Topeka, Kansas crowd last week after Justice Kavanaugh achieved final confirmation. Democrats don’t like being told about the ‘mob-like’ nature of a significant percentage of their base, but that doesn’t make it any less true. From obnoxiously confronting senators to rudely running them out of restaurants, from shrieking banshee-like howls in the Senate gallery as the vote took place to literally trying to beat down the Supreme Court doors during his swearing in, the ‘angry Left’s’ hysterical reaction to Kavanaugh’s confirmation process and eventual installment revealed their true nature better than any words from our side could possibly describe.

Thankfully for us (in a way), Democrats seem to have little desire or ability to keep their ‘crazies’ in check - probably because those ‘crazies’ now represent such a significant portion of their party base. So keep it up, lefties. Keep blocking traffic. Keep calling people names. Keep running those you disagree with out of restaurants and public spaces. Keep revealing the black ugliness that resides inside of you to the rest of America, but you might find in November that fewer people agree with you than you think.

Justice Kavanaugh - Yes, it was ugly and yes, it was unfair to Brett Kavanaugh to have been put through all manner of activist shenanigans and absurd accusations to try and delay and eventually derail his confirmation. However, as it served to stir up the GOP base from lethargy for the midterm elections to nearly equal the enthusiasm level of Democrats, their dirty tactics certainly did the trick. Thanks, angry mob!

What’s more, Kavanaugh’s confirmation underscores a key Trump selling point in the 2016 election in three ways - 1.) that Trump would govern as a conservative, 2.) that he would appoint conservative judges and 3.) that his appointments would shape the court system for decades to come. With two SCOTUS appointments and a record for Circuit Courts already under his belt, President Trump is more than fulfilling his promise and exceeding expectations beyond anything even his most ardent supporters could dream of.

The Senate - Remember when Democratic pundits were saying they might take the Senate along with the House? It wasn’t so long ago, but now they seem to have abandoned that and are instead pinning their hopes on turning the House based on polling in a few swing districts. And yes, they may very well scrape together enough wins to do it (and even the Senate isn’t in the bag until the polls are closed), but it’s closer than it was, and with the Senate likely to remain in GOP hands the Trump agenda can continue largely unabated.

Want to keep remaking the courts? Vote for your Senate GOP candidate. Heck, while you’re at it go ahead and pull the level for your GOP House candidate as well.

The black vote - While Trump’s approval rating among blacks likely isn’t quite the third that Rasmussen polled back in August, even CNN admits that the president is gaining some ground here. And while it may in reality only be a few percentage points, any vote for us and not for them is a vote freed from Democrats counting on that constituency, um, like they own it.

The Hispanic vote - Democrats are supposed to get the Hispanic vote by birthright, right? Not so fast! Citing recent polling that showed Trump’s Hispanic approval at 41 percent, MSNBC national political correspondent Steve Kornacki called that demographic a “worry area” for Democrats.

“One-third of Latinos identified as conservatives,” Kornacki told a panel on HBO’s Real Time With Bill Maher. “A quarter identified as Republicans. A poll there from a couple of weeks ago had Trump’s approval in one hitting at 41 percent with Latino voters … So if you’re a Democrat and you’re looking at California, Texas, Florida, couple other districts around the country where potentially the Latino vote will make or break you, I think that’s your biggest concern right now.”

Which naturally leads to the last point of this non-exhaustive list:

The economy, stupid - While there are certainly improvements that need to be made, especially with wage growth, America is experiencing an economic boom unlike anything that’s happened in decades. Love Trump or hate him, ultimately it’s feeding our families that should matter most, at least to normal people.

For example, from listening to the liberal media you might think that Hispanics vote on one issue and one issue alone - immigration - and yet it’s actually the economy that concerns them the most, according to Kornacki. With unemployment at an all-time low and median income for Hispanic households actually on the rise, even Hispanics who hate Trump himself are less likely to want to upset the apple cart. And why should they?

There you have it - seven reasons why the midterms might not go exactly as Democrats plan. Thanks in no small part to President Trump, things are certainly looking up for GOP candidates. Of course, nothing is in the bag, which is why your vote, and the vote of everyone you can bring along, is so absolutely critical.