Scott Morefield
|
Posted: Mar 23, 2018 12:01 AM
Share   Tweet
The opinions expressed by columnists are their own and do not necessarily represent the views of Townhall.com. 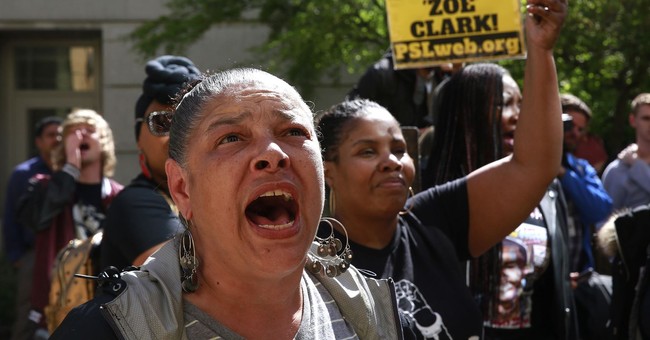 A black man with two small children was shot and killed by Sacramento, California police. His only crime? Holding a cellphone while standing in his own backyard.

That seems to be the Left’s narrative, anyway, regarding the death of 22-year-old Stephon Clark, who was indeed shot by police in his grandmother’s yard on Sunday night. And given today’s political climate along with mainstream media headlines and activist tweets on the topic, it’s no wonder so many people are outraged.

The tweet that perhaps went viral the fastest, with well over 100,000 likes and retweets, came from First Coast News journalist Lana Harris, who wrote, “Stephon Clark. Officers reportedly shot at him 20 times in his backyard because they thought he was holding a tool bar. It was his cellphone. Someone will have to explain this to the two little boys he leaves behind - one and three years old.”

“Clark was in his own backyard when officers shot at him 20 times,” read the Huffington Post byline. The site’s main headline on Wednesday night read, “Cops Kill Unarmed Man *In Own Yard* 20 Shots Fired.”

“Police shot at a man 20 times in his own yard, thinking he had a gun. It was an iPhone,” headlined the Washington Post.

To get to the actual facts, or at least some explanation that doesn’t involve Clark sitting in his backyard on a work conference call when two police officers strolled by and simultaneously thought “hey, let’s shoot a black guy today...” - one had to read beyond the screaming headlines, but not very far.

Turns out, the incident involved some serious property destruction, a multi-yard chase involving fences... and a helicopter. Yes, a helicopter and yes, I’m pretty sure they don’t bring those things out to look for jaywalkers.

As it so happens, far from a night of shooting random black people just for the fun of it, these two officers were responding to a 911 call about a man breaking vehicle and home windows with what the helicopter pilot thought was a toolbar. When encountered, the man led them on what the Washington Post called “a frantic foot pursuit through darkened streets.”

Even the Huffington Post couldn’t help but cite the inconvenient details later in their coverage:

“Disturbing helicopter footage of the incident, released Wednesday, shows thermal images of Clark running through his neighborhood and hopping fences as two officers begin to close in on him. He stops at the home he shared with his grandparents and two sons. Seconds later, officers shoot him dead.”

While an investigation is being conducted and the truth will be ascertained about whether or not officers should have pulled the trigger when they did, one fact is incontrovertible - Clark could have surrendered at any point during his multi-yard pursuit, yet chose not to.

It should also be noted that Sacramento Mayor Darrell Steinberg, hardly a “law and order” conservative by any conceivable definition, chose not to “second guess the split-second decisions” of the officers.

Even so, Leftists have already turned it into a race thing. In their coverage of the incident, VOX wrote, “Police killings of unarmed black men helped fuel the rise of the Black Lives Matter Movement. Now a new tragedy — the shooting death of an unarmed black man in his own backyard — is raising new questions about how much things have changed, if at all.”

VOX then goes on to cite the Washington Post’s Fatal Force database statistics that show that out of 230 people killed by police in 2018, 38 were identified as black.

That’s 17 percent, out of a population that makes up about 13 percent of America. Slightly more than their representation, but hardly the “significant racial disparities” VOX complained about later in the piece so they could attribute it to “high levels of housing segregation and economic inequality” and stuff.

The Washington Post also feels like there’s an “overrepresentation of African Americans” in the statistics, citing statistics last year showing that of unarmed people killed by police, “30 were white, 20 were black and 13 were Hispanic.”

Given the fact that black offenders actually commit 52 percent of homicides, or well over their 13 percent representation of the population, the fact that the number is significantly less than white suspects shot is a testament to police restraint, not racism.

Granted, pulling that trigger should be the absolute last thing police do when confronting any criminal suspect. On the other hand, bashing in windows and running away from police should also be the last thing anyone who doesn’t want to get even inadvertently shot should engage in.

Even though we see things differently, Left and Right should be able to agree on this: Stephon Clark’s death was a needless tragedy, and yes, it was entirely preventable.