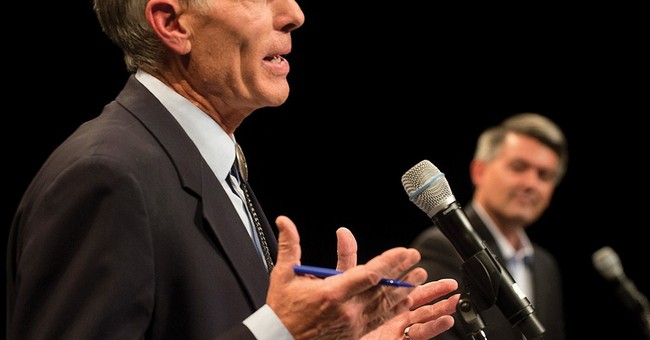 If polls are any indication of what will happen on Tuesday, Election Day 2014 just may be the last time that phrase "the war on women" will ever be used again. The rhetoric employed by Democrats over and over again for the past four years has met its Waterloo, and the DNC is in panic mode.

From Colorado to Kentucky, the liberal candidates who have promised abortions for every woman and who have said their Republican opponents will "ban condoms," are now on the verge of a decisive loss. One that should forever bring an end to the "war on women."

As Democrats are learning, it turns out women care more about the economy than birth control.

It's amazing how quickly fear focuses the mind away from condoms and the pill to more important things when you're without work, without money and as millions of us women are finding out with each passing month of Obamacare, without a doctor.

The left's brash tactics have turned off many voters. The little cursing princess video earlier this month sought to draw attention to equality in pay. Not only did the delivery of young girls dressed up as princess with foul mouthed bratty attitudes turn off most viewers, but it brought to light the false facts of women's equality in pay. The gender income inequality argument has been proven to be false because those on the left don’t compare apples to apples when they quote their false statistics. The left doesn’t compare men and women in the same positions, geographical location or even career fields. It may go down as one of the worst political agenda backfires of this election season.

Mix in the inflammatory words from the lefts leadership like DNC Chairwoman Debbie Wasserman Schultz comments regarding Gov. Walker saying “Scott Walker has given women the back of his hand. I know that is stark. I know that is direct. But that is reality.” Or the girls in the Secretary of State office crying when Fox News's Bill O'Reilly issued his appraisal: “With all due respect … that woman looks way out of her depth over there. Just the way she delivers, she doesn’t look like she has the gravitas for the job.” Marie Harf, the department’s deputy spokesperson, unprofessionally responded by tweeting: “.@statedeptspox explains foreign policy w/ intelligence & class. Too bad we can’t say the same about @oreillyfactor.” The joke turned out to be on these feminist as Instead of helping the issues they were addressing, they just reduced the level of respect people on both sides of the aisle have for them.

This just shows when the Democrats cannot sit there and use this false GOP “War on Women” concept, the majority of the electorate supports the Republican position.

In Iowa, with Joni Ernst being the GOP candidate, the feminist were not able to spin the false war on women narrative considering the democrat candidate is a man!

In Colorado, The current Democratic Sen. Udall had tried his best to make his campaign be focused on women's issues with hopes motivating pro- Udall female voters to the voting box, but failing miserably because Congressman Cory Gardner’s focus on the economy is appealing to both sexes.

And then there's the Democratic President, who traveled to Rhode Island for a campaign event and issued a broadside against millions of mothers who choose to stay home with their kids. “Sometimes, someone, usually Mom, leaves the workplace to stay home with the kids, which then leaves her earning a lower wage for the rest of her life as a result,” he said. “That’s not a choice we want Americans to make.”

Motherhood is a not a choice that Americans should want to make? Is he serious? From where does he think children -- or in the left's thinking, future recipients of government handouts -- spring forth? Just how should these children learn and develop at a young age? In the all-knowing embrace of federally-run infant education camps?

On Tuesday, the candidates who win will be the ones who motivates their base and the Democrats seem to be a Party reminiscent of the GOP in 2008 & 2012 with lots of voter apathy. I am hoping the GOP has learned their lessons and continues to unify the base behind the issue we can all agree on: the economy.

Within every political party there is always going to be diversity in demographics and different groups who emphasize certain points over others and as long as we continue to think that one group needs more emphasis than another or put more stock into one group over the other, then that Party is never really unified. We need to go forward after November 4th being known as the Party built on the principles of limited federal government, protecting individual freedoms, encouraging personal responsibility and free markets while returning political power to the states and the people.

After Tuesday night this will be confirmed and the DNC will be off to find another demographic or characteristic they can portray as an abused victim and use to shoot holes into the GOP.

Those ideals should be something every Republican whether they are black, white, seasoned, Millennial, any nationality, male or female should appreciate and be motivated on behalf of this economy to turn out to the polls on Tuesday.